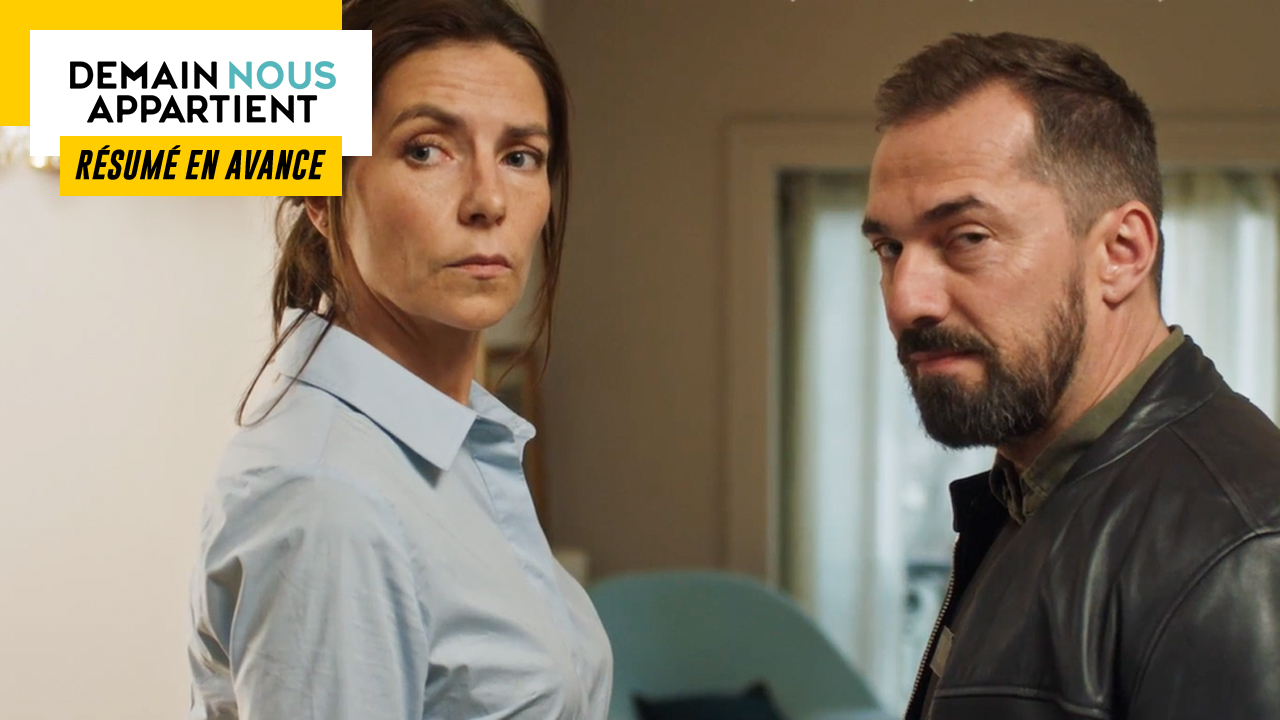 In the next episode of “Tomorrow belongs to us”… While the police search Sophie’s home, Raphaëlle teaches her father a lesson. Brigitte should have locked the door.

Thursday, April 28 in tomorrow belongs to us…

At the hospital, Anna has just woken up but is still unaware of the consequences of her operation. Karim, who is by her side, teaches her not without emotion that she will never be able to have children again. Upset, Anna launches when she understands that he wants to leave her. Indeed, he always wanted to have another child. Now that she can’t have any more, she feels that it wouldn’t be fair if he couldn’t fulfill his dream anymore because of her. But Karim reassures her before declaring that he has no intention of leaving her. Although he would have liked to have a child from the woman he loves, what matters to him today is that she is alive. With tears in her eyes, Anna tells him how sorry she is. Right after, Karim retorts that he loves her before kissing her tenderly.

For her part, Nordine goes to Sophie’s. After a whole night searching for Ophelia, the policeman is tired and would like to spend some time with her. As she hides the fugitive at home, the lawyer makes her believe that she still has a plea to prepare for an important hearing in the morning. Once he’s gone, Ophelia can’t help but notice that her accomplice’s boyfriend doesn’t look very lively. Sophie retorts that Nordine loves her and that he has no reason to be suspicious of her.

Later, Ophelia confides in Sophie that she can’t stop thinking about Anthony. Very moved, she can’t believe she won’t see him again. For her part, the lawyer tries to understand what happened since they were supposed to disappear. It is for this reason that she agreed to help them by hiding a weapon in court. Ophelia replies that she is well aware of this and that if their plan has deviated so much it is because Anthony died because of Chloe. Annoyed, Sophie replies that she does not agree with her. If Anthony is dead, it’s because of the choices he made. So she summons Ophelia to leave Chloe alone once and for all and move on. No longer condoning what she’s doing, Sophie tells her it’s over. As she is now in the crosshairs of the police, she advises Ophelia to surrender. Unfortunately, she leaves him no choice. If she falls, Sophie will fall with her.

At the mas, nothing could be saved. In his misfortune, Alex was still able to find in the rubble a box containing family photos. However, the oyster farmer doesn’t know how he’s going to cope now that there’s nothing left here. For her part, Chloé is positive, especially since her husband has already rebuilt the farmhouse in the past. Despite everything, Alex is hardly confident for the future. The foundations have been affected and it would be necessary to raze everything to rebuild everything. He is therefore not sure that the insurance will follow him. Chloé says that they will go through this new ordeal together and find a solution. Touched, Alex tells her that she is the most beautiful thing that has happened to him in life and then kisses her.

At the station, Martin, Karim and Sébastien take stock of the investigation. While researching the Messys, Captain Saeed traced them back to their father Olivier. The latter had been convicted for the first time in 2003 and had been defended by the Morel cabinet. That year, the firm hired an intern to handle the file, none other than Sophie Novack. The same year, Anthony and Ophélie were placed in a home and then in a foster family. Karim therefore contacted Master Morel, who confirmed that Sophie had taken this matter very seriously. As she herself had a difficult youth, she could very well have identified with them. In fact, the police suspect her of being the Messy’s second accomplice.

For her part, Nordine receives a call from Sophie who wishes to obtain information on the investigation. He makes her believe that the research concerning Ophelia has been abandoned because they fear that she has already left France. Nordine barely has time to hang up when Martin tells him that they are going to search Sophie’s home.

At the same time, Sophie pushes Ophelia to leave the place as quickly as possible, specifying that she is putting them both in danger.

At the end of the day, the police search Sophie’s home. Unfortunately, they find nothing since the whole apartment has just been cleaned with bleach. Suspected of having hosted Ophélie during her run, Martin asks the lawyer to follow her to the police station.

RAPHAËLLE TEACHES HER FATHER A LESSON

While shopping with her mother, Camille is full of praise for Stanislas. She finds him too cool and contrary to what her grandfather could have imagined. Camille then confides to her mother that Sébastien wanted to know if the skipper was paying rent and if he was doing his shopping.

Later, Raphaëlle joins Stanislas at the Spoon for lunch. The latter ends up admitting to her that he had the right to a little one-on-one with Sébastien and that he revealed to her that she had financial problems. Raphaëlle replies that she has no problem with money and that her practice is doing very well. Insofar as he wanted to trap him, Raphaëlle intends to teach his father a little lesson.

So she arrives in his office and makes him believe that Stanislas left without even leaving him a word. An attitude which hardly surprises the prosecutor who has never really appreciated the skipper. Raphaëlle then continues her little game and then invites him to dinner, explaining that it would do him a lot of good if he were there.

In the evening, Sébastiense goes to her daughter’s. While the whole family is having an aperitif, Sébastien has the unpleasant surprise of seeing Stanislas join them. Although she is perfectly aware that he did this to protect her, Raphaëlle asks Sébastien not to meddle in her private life anymore. Bad player, he turns and prefers to leave.

BRIGITTE SHOULD HAVE LOCKED THE DOOR

In the morning, Pierre and Brigitte take a walk by the sea. While the matriarch Daunier jumps at the slightest opportunity to openly criticize her children, Pierre cannot say the same about his daughter with whom he is trying to reconnect. After apologizing for her clumsiness, Brigitte makes her understand that Aurore has her little character and even goes so far as to think that she is leading her son by the nose. Having both had a great evening the day before, Pierre and Brigitte continue their walk hand in hand.

Subsequently, Brigitte offers Étienne and Bénédicte a night in a large five-star hotel in the city. If she explains doing this in order to thank them for their kindness, she actually intends to take the opportunity to have the house all to herself in order to spend time with Pierre.

At the end of the day, Pierre arrives at Brigitte’s with a bouquet of flowers. As they chat over a glass of wine, they end up kissing passionately. When they are about to make love on the couch, Dorian shows up because he forgot his phone charger. Caught in the act, Brigitte makes her grandson promise to keep the secret.