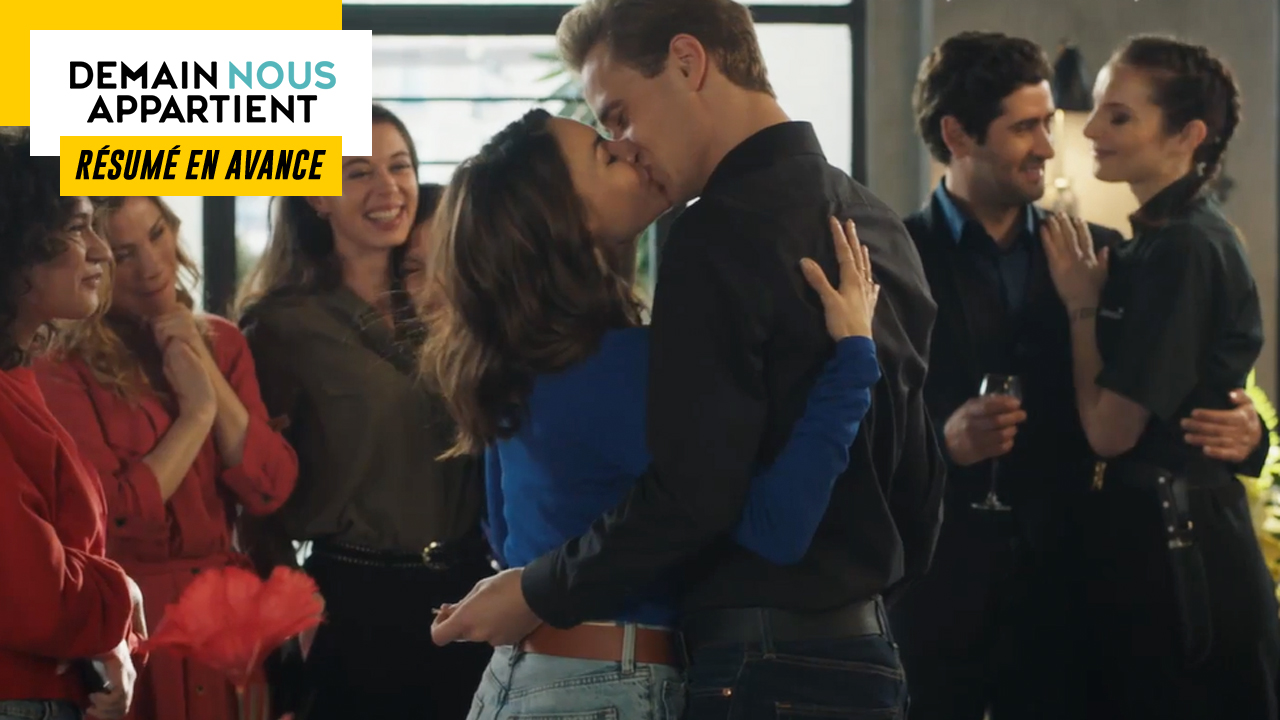 In the next episode of “Tomorrow belongs to us”… While the Messy take Chloé hostage, Olivier is transferred to prison. At the same time, Bart proposes to Louise in marriage.

Thursday April 14 in Tomorrow belongs to us…

As the trial of Anthony and Ophélie Messy, the Spoon hostage takers, approaches, Christelle worries about Charlie. However, the social worker wants to be reassuring, what happened last summer was not her fault since the doctor diagnosed Stockholm syndrome. If Christelle believes that it is now ancient history, this is obviously not the case for Charlie.

For his part, Sébastien is the general counsel in the Messy trial, which surprises Commander Constant given that he is directly involved in this affair. Indeed, Camille and Xavier were among the hostages. Sébastien then reminds him that a young man has been killed and then adds that he intends to do everything to put them behind bars.

Not far from there, Charlie meets Anthony in the visiting room, who was afraid that she wouldn’t come. Indeed, he had found her distant during his last visit two months earlier. Charlie then guarantees that she does not move away from him and then specifies that she had things to manage lately. Reassured, Anthony confides how much his visits do him good. Besides, he keeps telling himself that if he hadn’t been completely obsessed with his sister’s plans, things could have been different between them. Unfortunately, he can’t go back. After making sure she hasn’t told anyone they’ve stayed in touch, Anthony tries to find out what she’s going to say on the stand because he knows he was hurtful to her at the time of his arrest. However, Charlie does not hold it against her and understands that he did this only to whitewash her.

Meanwhile, Raphaëlle explains to Chloé that it is important for her to make her voice heard in order to establish the truth during the trial. Nevertheless, the mother of the family fears that the defense lawyer minimizes what the Messy did to her. Raphaëlle therefore tries to reassure her and then makes her understand that her testimony will at least allow her to turn the page on what she has experienced. For his part, Alex, who has no memory, feels useless. If he will be able to accompany his wife to court, he will not be able to be at her side in the office.

Later, François finds Charlie at the end of class. As the trial approaches, the French teacher worries about her and tries to be considerate. Unfortunately, the Molina girl turns up her nose and sends her packing. Annoyed, François points out to her that she doesn’t have to send him off either. Charlie then apologizes to him and agrees to go have coffee with him.

A stone’s throw away, Anthony and Ophélie are transferred to the Palais de Justice. On the spot, the young woman makes the police officer who accompanies her believe that she does not feel well to sit on the dock and recover the firearm taped under the seat. The next moment, she points it at the policeman and orders him to remove his handcuffs as well as those of his brother.

At the same time, Chloé, Alex and Raphaëlle come out of the Judge’s office and come across Ophélie and Anthony armed. Immediately, Ophelia goes with fury and determination on Alex whom she punches violently in the face then takes Chloe hostage. Ophélie, Chloé and Anthony then leave the court and get into a car. At the same time, Karim arrives and tries to stop them. Unfortunately, it is too late. The Messys therefore flee with Chloe under the helpless gaze of Karim and Alex.

OLIVIER IS TRANSFERRED TO PRISON

Failure to assist a person in danger, concealment of a corpse, fire causing disabling injuries, assault, kidnapping and attempted murder of Gabriel Guého, intentional assault and battery on Chloé Delcourt and assassination of Alizée Melville. Here is the long list of charges against Olivier. Facing the prosecutor Perraud, the mathematics teacher indicates that he had no choice and that he did all this only to protect his daughter.

Before being transferred to prison, Olivier begs Sara and Karim to let them see his daughter but they make him understand that it is not possible. Olivier then climbs into the truck without knowing that Garance is still in a coma.

During this time, Chloé has gathered the entire teaching team to announce that Olivier has been arrested by the police. Given the seriousness of the events, he will be replaced within a week. Despite everything, we will have to continue to provide lessons and ensure that life in the school takes place as naturally as possible.

For his part, Noor is waiting for Karim at the exit of the police station. The latter tells him that Olivier admitted the facts but that it was Garance who killed Romain Melville. Although the young woman risks imprisonment, Karim says he is certain that the judge will grant him extenuating circumstances.

Bart is stressed. After buying an engagement ring for Louise, he worries that proposing at a surprise party might be a mistake. Chloe then assures him otherwise and even finds the idea romantic. Proposing in front of everyone close to her is a way to prove to Louise that she is already an integral part of her life.

Later, Bart announces his project to Vanessa. Great romantic too, this one considers her idea very touching. Moreover, the chef already has some ideas to make this evening unforgettable. She will therefore make cupcakes and slip the ring into a purple icing cake with silver beads to make it identifiable.

To get Louise away from the Spoon, Bart gives her a massage at a spa. On her return, the mother of the family discovers that her companion has organized a small surprise party. Anna, Roxane, Sara, Georges, Vanessa and Mathilde are all present. When the chef presents her with the cupcakes, Louise takes one but it’s the wrong color. Bart then gives her the cake containing the ring but Louise ends up leaving it lying on a table. When Georges is about to eat it, Bart violently snatches it from his hands before it’s too late.

As Louise hasn’t eaten the cake, Bart takes his courage in both hands and launches into a beautiful declaration of love.

” Louise, when I was in prison I felt like I was buried alive. I stared at the ceiling with my eyes wide open as everyone around me slept. And I was thinking of you. I was thinking of your courage to have raised two children on your own. To your fighting spirit when we both opened the Spoon and there were no customers. To your smile too, which is always there even when I’m sulking. And that’s what kept me going. I told myself that life was too short for me to waste a single moment now. I like you. I love everything you are and I already love everything you will become. I want to spend my life with you. “.

Bart then kneels down, takes out the ring and then asks her if she wants to marry him. Without hesitation, Louise hastened to accept, not without emotion. The couple then kisses to the applause of their loved ones.