Tomorrow belongs to us: revelations, anecdotes… A look back at the exceptional event… 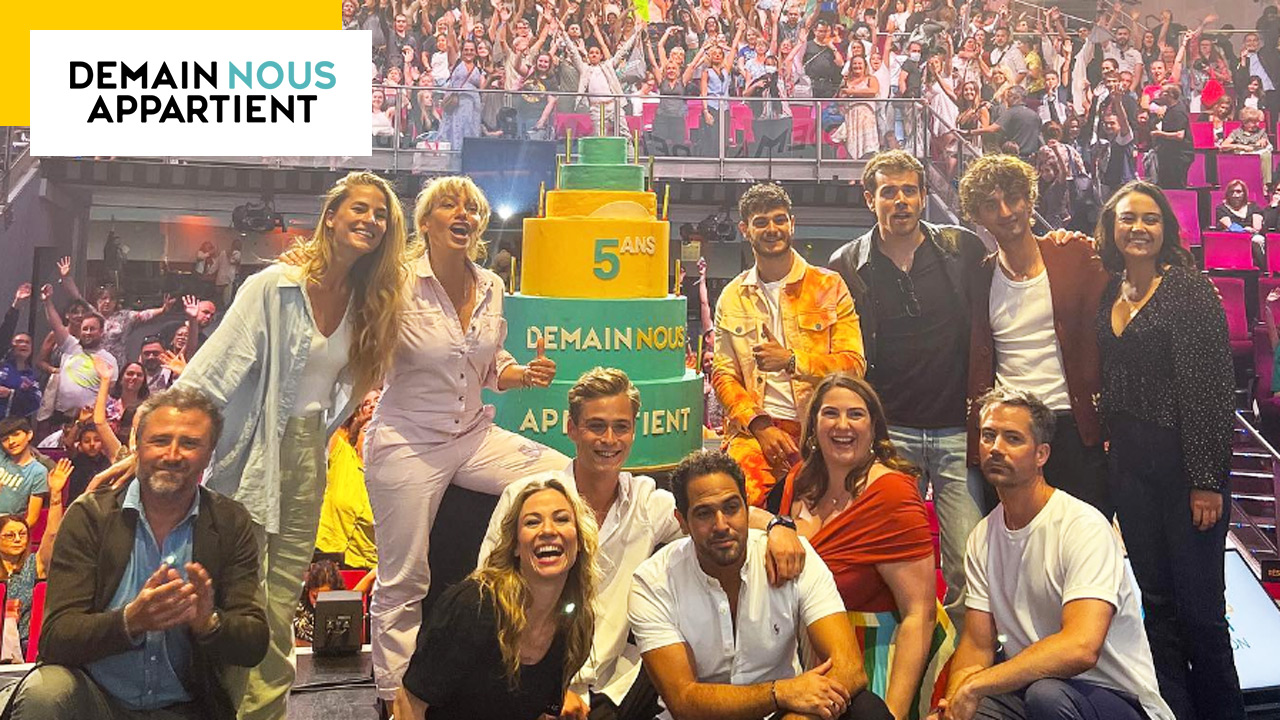 A few days in advance, “Tomorrow belongs to us” celebrated its 5th anniversary this Saturday in Paris as part of the first fan convention dedicated to the TF1 phenomenon series. Where were gathered 15 leading actors of the soap opera. We were there.

“I leave it to our tomorrows”. It is on these few notes of the credits signed Vianney that began this Saturday, July 2 at the Cité des sciences et de l’industrie de la Villette, in Paris, the first fan convention of tomorrow belongs to us organized by TF1 on the occasion of the 5th anniversary of the series.

With, on the program, a question-and-answer session led by Christophe Beaugrand, discussions with the public, filming anecdotes, and teasing of the intrigues to come. However, a few minutes from the start of the event, supposed to start at 1 p.m., the convention came close to cancellation due to a “lack of security personnel”, and in particular firefighters, to ensure safety. of all. But fortunately, the problem was quickly resolved and the fans were able to meet those who make them dream every evening at 7:20 p.m. on TF1.

The 5 years of a beautiful and large family

“It went super fast. We were originally scheduled for 3 months, a summer saga, and now it’s been 5 years, it’s quite incredible”, confides to our microphone Samy Gharbi on the sidelines of the panel and the signing session. During the exchange of just over an hour between Christophe Beaugrand and the 15 actors present, all those who have been part of the adventure from the start, such as Maud Baecker or Ingrid Chauvin, seem to share this feeling of a whirlwind went extremely fast, which they find difficult to measure but which still fills them with the same happiness and the same joy 1200 episodes later.

Since 2017, at the rate of departures and artistic revivals, like the one operated last summer, the historical figures of Tomorrow belongs to us have been joined by new faces, like the Roussel and Perraud families, represented this Saturday by Charlotte Gaccio, Maxime Lelue, and Jennifer Lauret. And between the latter and Ingrid Chauvin (described as “the flagship of the series” by Christophe Beaugrand), a beautiful friendship was born in front of and behind the camera.

“We are very close Jennifer and I. We met, we tamed each other. We are very similar. We are two mothers, in life too, and we have the same conception of priorities. It’s simple and it’s pretty”says Ingrid Chauvin about the bond that unites her to the one who has played lawyer Raphaëlle Perraud for almost a year and who was recently at the heart of the “Emprise” ark, which seems to have greatly affected the public and the whole team.

“It was complicated”admits Jennifer Lauret when a spectator asks her how she experienced this extremely strong arch. “It affects a lot of women, men too, and we don’t talk about it too much. It was far from obvious. But it was intense and it affected us all. As an actress, it was amazing to play”.

“And for once we were in something very psychological”adds Ingrid Chauvin, whose character, Chloé, was also involved in the infernal spiral created by Stanislas. “And we are not used to focusing on that aspect in the series. In general, we are more in the action, the extraordinary. And there we were at the heart of the emotion, at the heart of the human, of this manipulation that is too often rife. It was different and interesting to play”.

“Drama and love” this summer on TF1

After a montage of the most beautiful moments of the series since its launch and a blooper representative of the good humor that seems to reign on the Sète sets of the series, the actors of Tomorrow belongs to us are questioned about their favorite plots. And most then refer to the so-called “choir” arches, which allow the many members of the large DNA family to meet for several episodes.

“My favorite plots are those where we were all together”confides in particular Alexandre Brasseur, present since the very first episode in the role of Alex Bertrand. “The one on the bus of course. And I loved the ‘Hostages’ plot too”.

Also impossible not to mention the recent death of Louise (Alexandra Naoum), from which Hector Langevin is obviously still not recovering (“I cried again when I saw the images again”). Or the shock revelation in 2019 of the Lazzari’s secret. And the “true” family relationship that unites Victoire to her supposed sister Sandrine (Juliette Tresanini).

“I remember very well the day we learned about it, Juliette and I”tells Solène Hébert not without humor. “We had been called into the producer’s office at the time, Vincent Meslet. We were facing him, on two rolling office chairs. And when they said to us “Ok, she’s not your sister anymore, she’s your mother”, we really jumped and we went to the other end of the office on our chairs with wheels (laughs) . Today it’s complicated for me, I never know what to call my family (laughs). With the character of Véronique Jannot I alternate between “Anne-Marie”, “mom”, and “grandmother”.

But let the fans be reassured: if this convention was an opportunity to look in the rear view mirror at the past five years, it also allowed the stars of Tomorrow belongs to us to make some revelations about the intrigues that we will discover at the screen this summer.

“It’s Gonna Be Fire”promises Adher, whose character will be very present this summer in the decor of the hut. “We all remember it, Nathan was a pickpocket last year, but he will finally find his place at the hut and will become an ally for Charlie”tease for her Clémence Lassalas, her “partner in crime” from the Serie.

Finally, the main plot of the summer, which will start soon on TF1, will see Samuel (Axel Kiener) inherit a stud. “There will follow many adventures in this harras for Samuel and Victoire”tease Solène Hébert, whose character seems to have experienced 1000 adventures since the beginning. “We have a new setting, with horses. We took riding lessons. And there will still be a lot of drama and a little bit of love”. A summer ark that we can’t wait to discover and which will be an opportunity to see again Veronique Jannot in the role of Anne-Marie Lazzari.

In short, Tomorrow belongs to us still has some great surprises in store for us. And if the authors are obviously never short of ideas, the actors are not lacking either when it comes to imagining the death of their character. “I would like to die with all my children. That we have a car accident, something despicable, and that Damien is in tears. That way we all leave together”launches Charlotte Gaccio without hesitation, provoking hilarity in the room.

Tomorrow belongs to us, a soap opera that brings together all ages in front of the TV

After an hour and a half spent on stage, in the most contagious good mood, and several distributions of gifts in the room by the actors themselves, it’s time for the long-awaited signing session.

In the line that leads them to the various tables where Ingrid, Samy, Maud, Jennifer, or Hector have already started signing, fans of all ages are patiently waiting their turn. “We watch as a family since the first episode”tells us Sylvia, a 38-year-old mother who came today from Chartres with her 12-year-old daughter Inès.

“I really like the topics covered. They are very current topics. Homosexuality, harassment, control, battered women”she continues at our microphone. “I watch with my daughter and it creates dialogue at home. When you don’t have any problems, there are subjects that you don’t think to discuss with the children. And thanks to the series, we were able to discuss school bullying in particular”.

Véronique, 61, admits to having been “returned” by the death of Louise and never tires of the new plots of the series, which she watches with her husband. At their own pace. “At first he was a little resistant, and in the end he didn’t miss an episode. But we don’t watch every evening. I record them and we have evenings of 3-4 episodes”.

On this sunny Saturday, this early fan will for the first time meet the actors she watches every week on TF1. “I love them all. But I’m a big fan of Samy Gharbi, and also of Julie Debazac, who is excellent”. Valentin, he, a young 21-year-old viewer, is not at his first meeting with the interpreters of Chloé, Alex, or Anna. “I often go on vacation to Sète. And I watch Here it all starts too. I went to Saint-Laurent-d’Aigouze in May”.

A faithful of the universe Tomorrow belongs to us who, unlike some, was not disconcerted by the changes made over the past year within the cast. “I like the plots, the actors, and the revival. There is always change. I found it good to leave the characters and to make others arrive”.

For more than two hours, the 15 actors who made the trip to La Villette chained signings and brief discussions with their fans. Maxime Lélue, alias Jordan Roussel, has never yet participated in a festival to represent the series and therefore experiences such a delirious crowd for the first time.

“It’s the first time I’ve met the public in this way, it’s pure delirium”he confides to us between two dedications. “We see the public in a different way. It’s better than a picture in the street. We can talk a little with people, and they are so happy to see us. It’s great”.

A rather crazy experience that the young actor, who arrived in the series last year, will surely have the opportunity to relive one day in La Rochelle or at Series Mania.

Because when asked if he is ready for five more years, he answers without hesitation: “Of course. It makes me want to continue and see more”. With the Roussel family who, judging by the applause of the public for Maxime and his partner Charlotte Gaccio, seems to have definitely been adopted by the public. And who, soon, could overshadow the Delcourts? The future will tell.