This is quite the tangled web here…

But what else do you expect from Reddit’s “Am I the A**hole?” page?

Take a look at this one and tell us what you think about it in the comments.

“I’ll keep it short and to the point. I (22F) share a two-bedroom apartment with my best friend Tanya (20F) and my boyfriend Jackson (19M).

The day before yesterday, while Tanya was at work, I as usual went into her room to take her puppy out for her morning potty trip. While doing so I found a pair of my boyfriend’s dirty socks on her bedroom floor. I didn’t think too much of it at first and mentioned it to Tanya later around dinner.

She then jumped to the defensive and told me her puppy must have dragged it in to play with it. I didn’t question further and blamed her annoyed response to pregnancy hormones because she’s been moody more than usual these days.

Things continued as normal until the next morning. My boyfriend was abnormally quiet when getting ready for work. When I asked him what was wrong he blamed it on being tired having not slept well, even though we sleep together and I know he was snoozing for most of the night.

Alarm bells started going off in my head at this time, but I had yet to make the connection until Tanya was cold to me over breakfast. Putting two and two together, I told Tanya that I had figured out what happened and she was no longer welcome in my home. I gave her three days before I’d have Jackson change the locks on the front door.

Well apparently this blew up in my face and my parents and sister are saying that I’m the a**hole for kicking out my pregnant ex-best friend and not Jackson. So Reddit … AITA?”

This reader had a hot take on the situation. 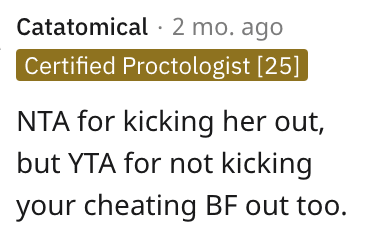 And this Reddit user has their own theory about what’s really going on here. 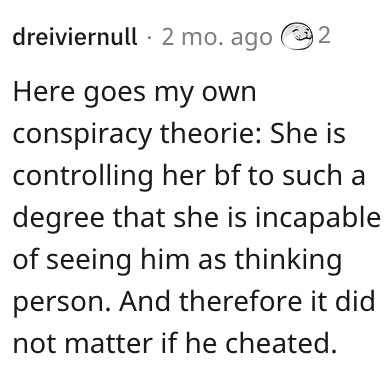 And another individual said this seems like pretty flimsy evidence for cheating…and they ended their thoughts with a zinger. 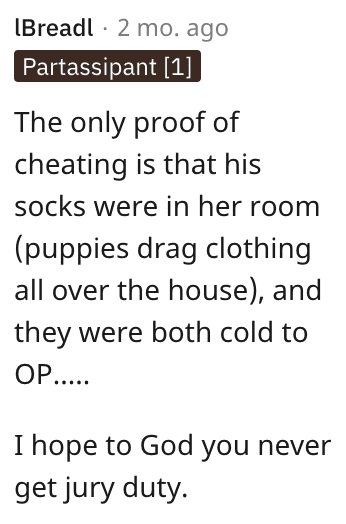