What do you do if you’re still good friends with your ex?

As you probably know, it can cause some weird feelings between people on both sides of the relationship…especially if you used to be married to that ex.

Check out this story and see if you think this woman is out of line.

“6 years ago i got divorced from my now Ex-Husband, there was no drama that led to this we simply realised we were no longer happy or in love so it would have been a clean break if not for the fact we had a daughter who is now 11.

Neither of us wanted to lose full custody of her or miss important moments in her life, she is the most important person in both our lives and we debated on trying to make it work just for her but realised that would only lead to all three of us becoming miserable so we entered an arrangement that many would view as unconventional.

When we sold our house we used the money to buy two semi detached houses that were joined and had a door installed between them the construction company tried to warn us against this as it would affect resale value but neither of us had any intention to sell so we had them go ahead with it we also had them take down the fence between both our back gardens so our daughter would have an extra large back garden to play in.

Many of you may balk at the door but there is an agreement, it is strictly for our daughters use and neither of us can use it barring any emergencies say a fire, a medical emergency or something being wrong with our daughter.

She has two bedrooms one in each house and every day she can pick where she wants to have breakfast, dinner, and sleep. I won’t lie it was awkward at first but for her sake we made it work and even regained a lot of the friendship we had lost though it was of course strictly platonic now.

Last year my ex-husband married his girlfriend of three years a lovely woman who i’m actually friends with and I was even a guest at their wedding with my daughter being one of her bridesmaids. All in all it’s an arrangement everyone is content with except for my boyfriend who I started to date two years ago.

He understood the arrangement entering into the relationship and while he said it was a bit “weird” he never protested and all seemed well, things are getting more serious and we’ve been discussing moving in together and he has made it clear he wants me to move as he doesn’t want to live next door to my ex-husband , I understood that but told him that wouldn’t be happening as my daughter had to come first and our arrangement gave her a stable upbringing.

He got upset with me and asked me how he was supposed to be a father to my daughter when she already had a dad and he was literally a wall away, I won’t lie this took me by surprise as I had no idea he wanted to be a “father” to her…I told him gently but firmly that he wasn’t her father, that she already had one and that even her fathers wife didn’t try to be a Mother, instead she is called by her name.

I told him if he wants some kind of familial title he could be an uncle but I wouldn’t give him permission to take her fathers title when he is very much involved in her life. He told me if I loved him i’d move for him and despite me trying to tell him I do love him he isn’t listening, AITA in this?”

This person said she’s NTA and that it sounds like she was pretty upfront about how this whole situation works. 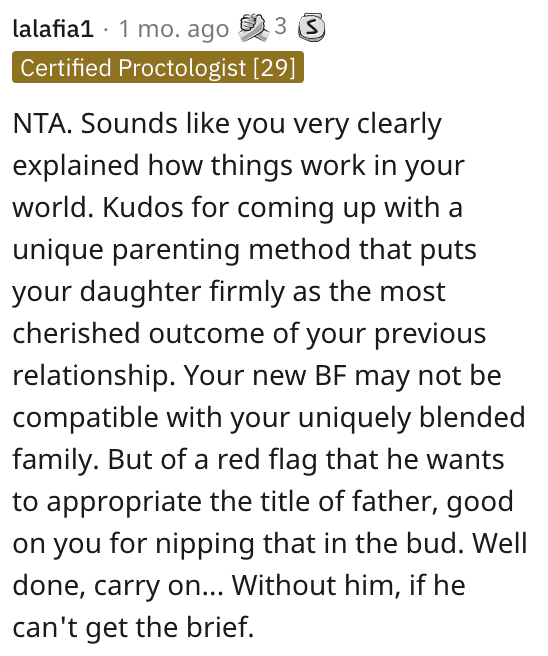 And this reader agreed and said she was honest about it from the beginning. 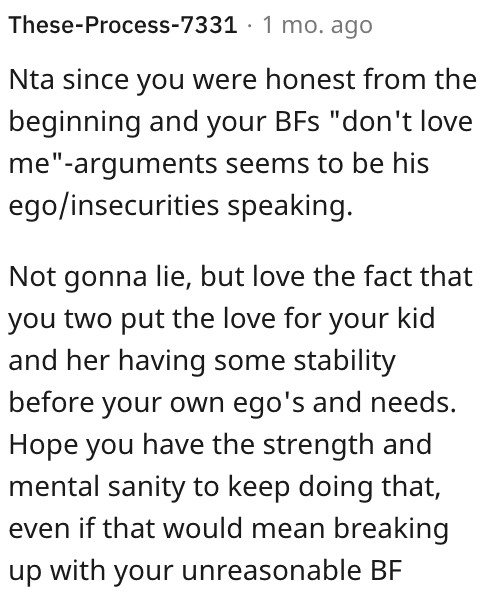 Another individual shared their own experience about doing something similar in their own life. 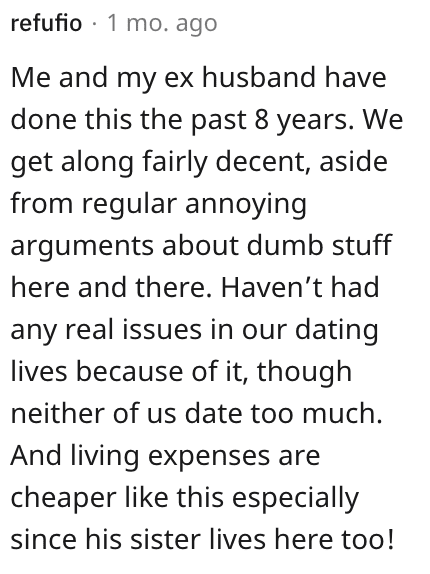