The decision to move in with someone is a pretty big deal, don’t you think?

And is the timing ever REALLY perfect?

I’m not sure about that one…

Check out this story from a woman who wants to know if she’s an a**hole for NOT moving in with the guy she’s been with for a long time and see what you think.

“I (27f) have been together with my boyfriend (29m) for 10 years. Currently, he’s living in the family home (where he grew up in) with his brother, his brother’s wife and their two children.

My boyfriend’s parents have bought a second house a few years back to live in after they’ve both retired. Because of Covid and the possibilty to work from home, they’ve already moved there but spend one night a week in the old home.

The brother, his wife and two children will buy a house in january and will move there some time next year. In order to be able to buy this house he needs a lot of money, so my boyfriend agreed to buy the family home off of his parents. The brother will get the money as his part of the heritage. So far, so good.

No for the bad part. The parents will sell the house for a lot less money than it’s actually worth but because of this they added a line in the contract which allows them to have a livelong right of residence in the family home. This includes their old bedroom, so this room cannot be altered at all.

For the next four years they’ll continue spending one night a week here because of work. After those four years, they’ll both be retired so they won’t come over as often but they will occasionally.

My boyfriend told me this after he and his parents agreed on that contract. But to be honest, for me this is a hard no. In my eyes, this will never be our home, our house. It’ll always be their home, they’ll interfere with every decision.

And my worst fear would be, that when the parents get older and cannot live on their own anymore, they’ll just return to the old family home…because they can. And I’m not willing to live in constant “fear” of that happening.

So I told my boyfriend, that I will not move in with him into that house as long as this line within that contract exists. I want to have my own place to live and start a family in, I’m not going to share it with my future in laws.

Now his side of the family is guilt tripping me and telling me I’m the reason our realtionship will end. But honestly, no. I wasn’t included in any part of drawing up that contract and instead was presented with a fait accompli. Even though I feel like this also concerns me…somehow.

So, please tell me reddit, AITA because I’m not going to move in there and share a home with my in laws until the end of their days?”

Now let’s see what people had to say about this on Reddit.

This person said this woman is NTA in any way. 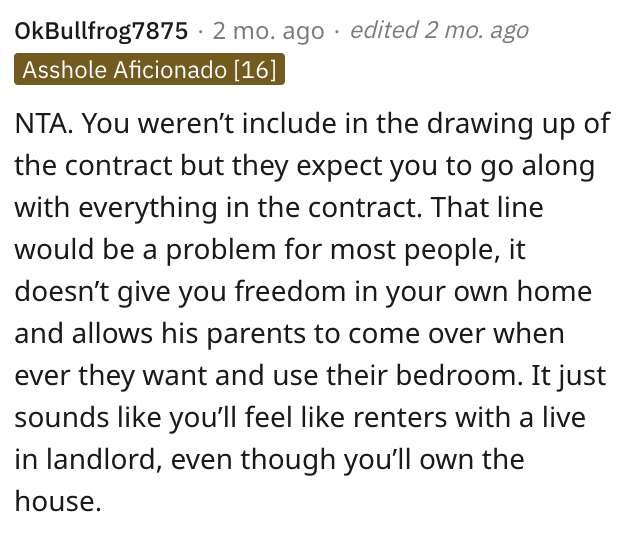 And another individual brought up a good point about how strange this family dynamic seems to be. 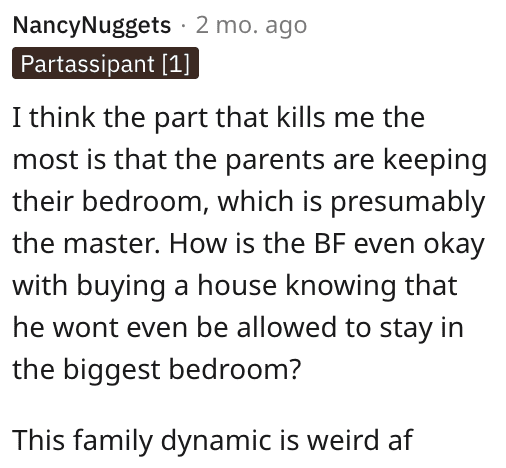 Another Reddit user said that she shouldn’t commit to something like this when he can’t commit to proposing to her. Good point! 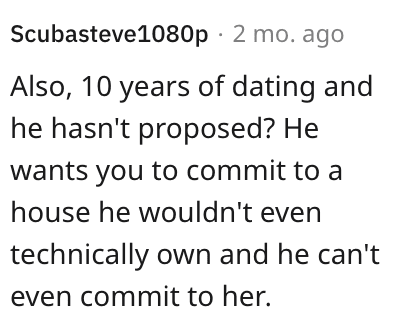