They Won’t Let Their Son Have Friends Over Again Until Someone Admits to Damaging Their Laptop. Are They Wrong?

Some people just can’t ‘fess up, can they?

Yeah, you might get into some hot water, but isn’t it just better to get it over with and come clean?

Take a look at this story from Reddit’s “Am I the A**hole?” page and let us know if you think this parent is taking things too far.

“My son is 19. A few weeks ago he had some of friends over which is fine. I went to bed early and when I went to bed, my son and his friends were in the basement.

I came down the next morning and went to check my emails. My laptop was in the same place I left it last night, but the screen was cracked, and it looks like there was a drink spilled on it. When my son got up I asked him if he knew who had damaged my laptop. He said he didn’t know and they had been in the basement while I had left my laptop in the dining room.

I told him there was no way the laptop broke its own screen and spilled a drink on itself so if it wasn’t him then it was one of his friends. He swore up and down that no one had touched my laptop. I was like okay, then no friends over until someone fesses up. I don’t think he took me seriously because I came home from work a few days later and he had some of his friends over.

I apologized to them but informed them no one had owned up to breaking my laptop so I wasn’t allowing company over in the meantime. My son is very upset, says I’m embarrassing him. I’m of the mind that I don’t want people in my house who feel it’s okay to break my things and then hide it.

I’ve made it clear I don’t expect them to replace it, I just want someone to own up to it and apologize. My sister has told me the punishment is harsh, and she agrees I’m embarrassing my son.

One person said they’re NTA and that this punishment was not overly harsh. 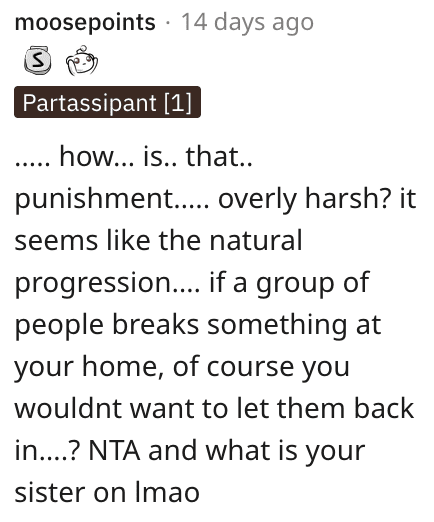 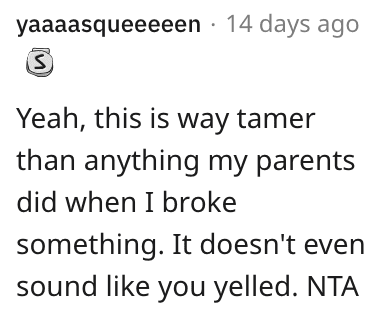 And this individual made a good point: this kid is 19 and not exactly a little kid anymore… 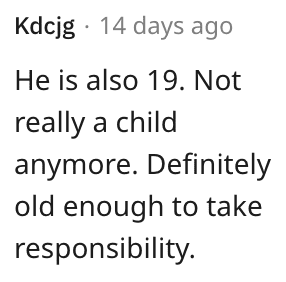 She Won’t Pick Up Her Son’s Half-Sister From School. Is She a Jerk?

Is This Woman Wrong for Locking Her Husband’s Friend Out of Their House? People Responded.

He Refuses to Let His Son Have His Daughter’s Necklace. Is He Wrong?

Is This Woman a Jerk for Leaving Her Partner’s Kids Unattended in a Swimming Pool. Here’s What People Said.

More Proof That Co-Parenting Can Be A Rough Gig

What Job Is Easy and Pays Well? People Responded.