They Sent Their Cousin a Bill Because Their Kid Ruined a Birthday Cake. Were They Wrong?

I think what this person did is something that a lot of folks dream of: sending someone a bill after they screw something up.

It’s a fantasy for a lot of us!

So let’s see what happened in this story from Reddit’s “Am I the A**hole?” page so we can all live out this fantasy together!

“We recently threw my 5 year-old a birthday party. He hasn’t had a real birthday party since he was 2 years old due to Covid, so this was the first one he’d actually remember. We wanted to make it special so we invited all our closest friends, family members and their kids.

One of my cousins, a single mom, has a very unruly 6 year-old. He is loud, disobedient, and a nightmare in public. When it came time to blow out the candles and cut the birthday cake, he came and stood directly next to my son. I anticipated what was going to happen next and asked my husband to stand behind this kid in case he tried to pull anything.

After we sang, this kid kept trying to blow out the candles. My husband kept blocking him and pulling him back and we could tell the kid was getting frustrated. Eventually my son blew out the candles and the kid absolutely lost it. He threw a tantrum and slammed his entire arm into the cake, knocking it into the table.

It was so awkward, everyone gasped and got quiet. My son looked up at us and I could tell he was about to start crying. In an effort to not cause a bigger scene, my husband picked him up and whispered to him that we had another special cake just for him (we didn’t) and he seemed to calm down.

Meanwhile, his cousin was still standing there screaming and crying, his arm covered in cake. His mom was nowhere to be seen. I walked him over to the sink and washed him off and quietly told him that he shouldn’t have done that to the cake and that he should apologize to his cousin for what he did. He screamed “NO!” in my face and then ran away.

My husband ended up running out to buy a sheet cake that we cut and served to everyone. I spoke to my cousin after the party about what happened since she wasn’t in the room, and she brushed it off saying “kids will be kids”. I completely disagree. I’ve been to plenty of birthday parties where the other kids let the birthday boy/girl have their moment. I suggested she pay for the ruined cake and she looked at me like I was crazy.

I told her how important it was to us that this birthday be special to my son since it would be the first one he remembered, and now all he would remember was that his cousin ruined his special moment. She got extremely defensive and refused to pay for anything. She then accused me of acting like “the perfect mom” and began to list the ways in which I was in fact NOT perfect. It was a hurtful conversation and we haven’t spoken since.

I sent her the bill for the ruined cake and she has not paid us. I actually feel she should pay for both cakes since her kid is the reason we had to get a new one, but I didn’t go that far. My husband thinks she’ll never pay us and that I should drop the issue at this point.

He says that since she’s a single mom it’s probably hard on her and we should cut them both some slack. I understand that, but I feel like that’s just letting her and her son off the hook and this will lead to even bigger problems in the future if we don’t hold them accountable.

This person said they’ll probably never get their money but they made their point. 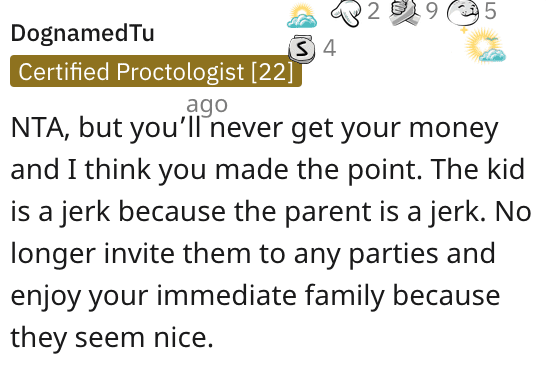 And this reader said they were a crazy kid but even they never acted like this. 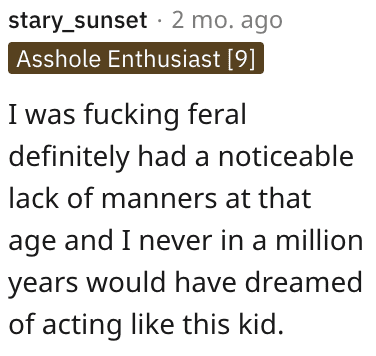 Another person said the cousin is definitely NOT raising their son the right way. 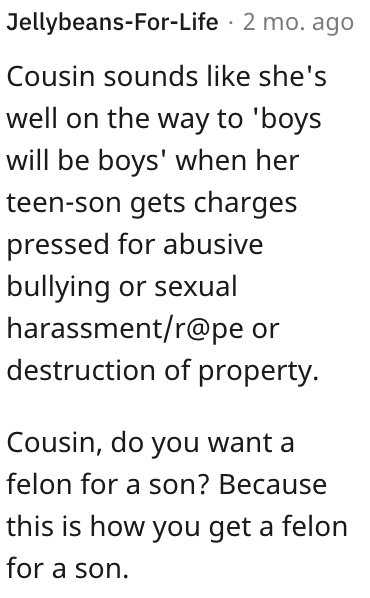