They Have Decent Reputations Now, But These 14 Companies Have Dark Pasts 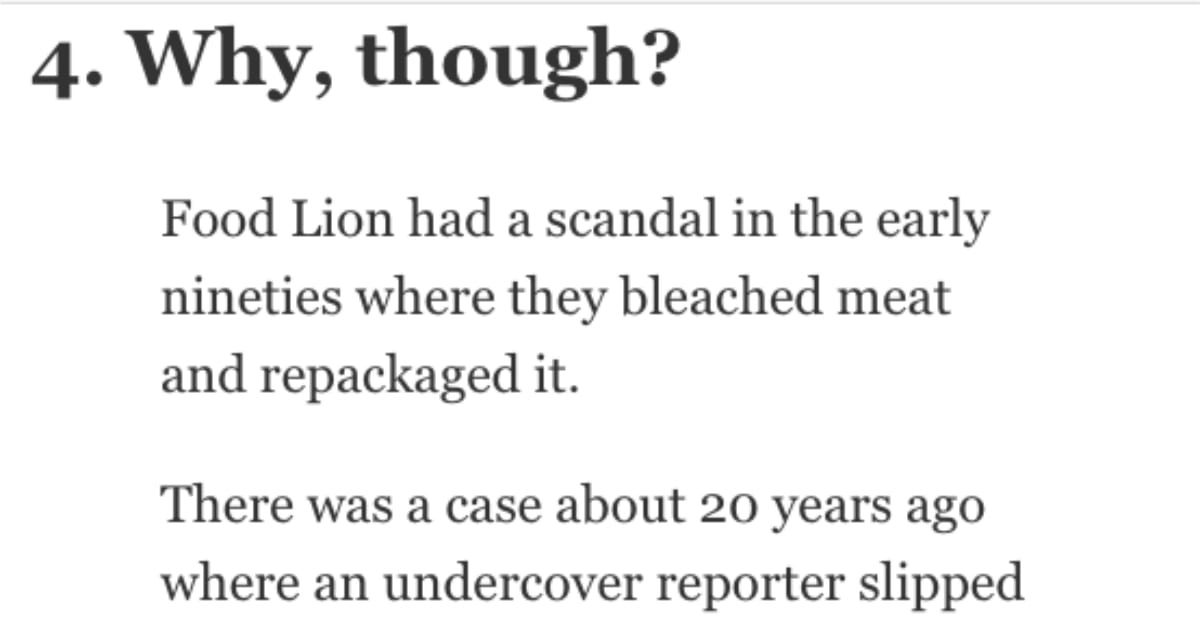 There’s a reason that every large corporation either has a marketing department, or employs a marketing firm.

A brand name is everything, especially when you’re huge, and for an event to sully your good name can lead to some serious and financially-damaging blowback.

Some marketing companies are so good that we’ve completely forgotten – or never really knew – how dark of a past these brands actually have…but lucky for us, Reddit is here to enlighten us.

By the way… these are coming from Reddit, so please treat the information accordingly. 😉

Chiquita. They once funded rebels in a South American country to overthrow the government, in order to have land to build banana plantations.

Banana plantations are famously laborious places. If you’ve ever heard the song “come mister tally man, tally me banana”, that’s what it is about.

Chiquita used to be the United Fruit Company. When banana laborers went into strike and organized protests, they got the US government to put pressure on the Colombian army to violently repress it, the army basically just opened fire over unarmed protestors then tried to cover up the whole thing, up till now there’s no real number for the amount of deaths, but probably around a thousand. 100 years of solitude has a reference to this event. I refuse to buy bananas with chiquita stickers.

13. Have they cleaned up their act?

Bayer. They paid to test its drugs on unwilling human subjects.

These included paying a retainer to SS physician Helmuth Vetter to test Rutenol and other sulfonamide drugs on deliberately infected patients at the Dachau, Auschwitz, and Gusen. They also had prisoners purposefully infected with typhus so that could test anti-typhus drugs. IG Farben also manufactured the cans of Zyklon B gas that were used in Auschwitz’s gas chambers.

(IG Farben was a massive conglomerate that included Bayer and other major companies such as BASF, Hoechst (Aventis), and AGFA)

If you haven’t seen it do. It’s about how making teflon poisons everything forever.

One guy spent over a decade working pro bono against DuPont when they poisoned an entire West Virginia town. DuPont set their army of lawyers against him. And he fucking thrashed them. One client after another, one by one, got them multi/million dollar settlements and bled DuPont dry. It was just him. He didn’t have a team. He left his firm because they represented DuPont and he was disgusted by them.

After he won a 4th or 5th settlement in a row, each one bigger than the last, DuPont surrendered and paid out over half a billion dollars to the poor citizens of that town.

But yes, most companies today that went through WWII did military contracts most likely to survive, I would assume.

10. Fruit causes so much trouble.

Dole (the fruit company) organized the overthrow of the indigenous government on Hawaii so it could join the USA.

More people volunteer their time and money for it than any other breast cancer charity.

I vaguely recall they kept almost half of the donations for themselves (they called it administration expenses).

They’ve also been labeled with pinkwashing, defined as organizations getting disproportionate publicity for donating very little.

Charity Navigator had rated them one of the worst charities for breast cancer. Bottom ten percent.

8. What is the matter with people?

Continental Tires. Stock for Mercedes and other luxury cars. They tested their durability by making WW2 camp prisoners walk in shoes made with their rubber soles upward to 30 miles each day. Many collapsed and died from dehydration and from being malnourished already.

the ones administering the quality control test didn’t care if the shoes fit the tester. Imagine walking 30 miles in shoes a couple sizes too small.

the company makes more than just tires, but it’s mostly known for its tires. From a New York Times article:

“While supplying the German military with tires, bullet-resistant fuel tanks, gas masks and brakes for battle tanks, Continental and its subsidiaries also produced consumer products like soles for shoes and hot water bottles that helped fulfill the regime’s promise to deliver prosperity to the German people.”

I was watching those WW2 documentaries and one of the episodes focused on companies that benefitted from the war. A good portion of the episode mentioned Continental (a company who is reconciling with its past and is making positive commendable effort to not hide it) and other companies (I forgot which big company that was mentioned, but it’s still not taking any responsibility for abusing war prisoners). Total coincidence that I had replaced all four Continental tires with another set two days prior.

7. Hollywood has a dark history.

Not a specific company, but an industry: Hollywood.

During the late 1930s Hollywood put a ban on anti-Nazi propaganda in films since they had a big market in Europe and didn’t want to step on toes.

The brothers saw the threat of Fascism. They were the first studio to create anti-Hitler content.

6. They’re more than what they seem.

On the same note, Bayer. Their researchers tested on people in the camps.

And now agricultural chemicals . I believe their old parent company was convicted of violations and dismantled for their participation.

They’ve distanced themselves from the blood diamond trade recently by claiming ‘conflict-free’ mining and starting programs focused on local entrepreneurship, but the scars across Africa remain today.

Millions have been killed.

Food Lion had a scandal in the early nineties where they bleached meat and repackaged it.

There was a case about 20 years ago where an undercover reporter slipped into a Food Lion and filmed what they were doing.

What they were doing was pretty bad. Food Lion actually sued the reporter and news organization for trespassing, and kind of unbelievably, they won

This was quite the landmark case in undercover journalism.

the fact that the person that made the .zip stole it and got praised for it.

People share their inventions with their friends without patenting it, a friend steals it and makes more money on a stolen invention than the original inventor will.

A tip to anyone making anything new: PATENT IT BEFORE YOU SHOW ANYONE (if you can afford it). I mean anyone. A patent shows its your invention in the eye of the government, and you’ll be protected from someone else taking the idea. If you can afford it, take out a patent. If you can’t afford it, be very careful who you talk to about the details of your invention or go open source.

2. The rubber industry has its own problems.

Firestone tires also has a little civil war problem. They propped up one side of the Liberian Civil War, which featured a lot of child soldiers and machetes.

It’s the sort of thing you’d expect from an oil company or maybe a mining group. But tires seem so wholesome!

1. We should know her name.

Parker Brothers and the story of Monopoly. Charles Darrow essentially took an open source game originally made by Lizzie Magie and sold it to Parker Brothers, who learned about the original game and bought rights to the patent.

They tried to sue Ralph Anspach for making Anti-Monopoly in the 1970s, but the early history of Monopoly worked against Parker Brothers and they eventually had to settle with Anspach.

Charles Darrow and Parker Brothers may have popularized the game, but credit for the game should go to Lizzie Magie.

Well, I guess it’s time to start digging into where I’m spending my money a bit more.

What other companies have questionable pasts? If you’ve got another example, share it with us in the comments!