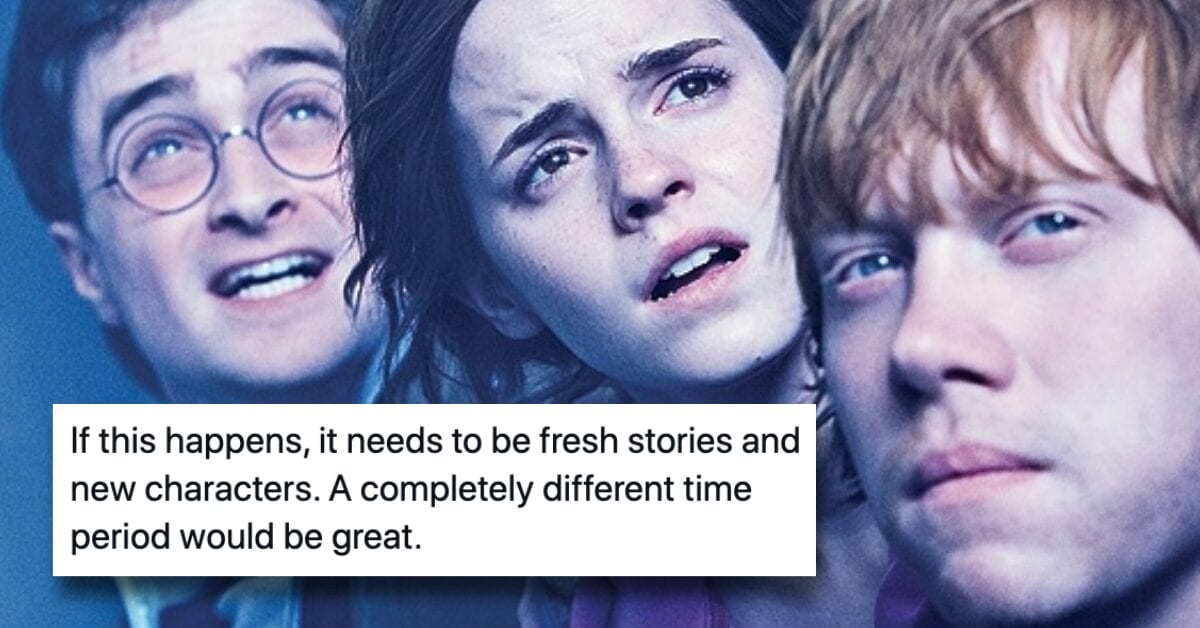 Harry Potter is one of those properties that belongs now to the people who love it, I think – we’ve grown up with the books during our formative years, we waited anxiously for each movie to be released, and now we watch them any time they happen to pop up on ABC Family, right?

Oh, and we’re definitely gearing up to read them to our kids, if we haven’t already – I can’t wait!

I think that’s why, when news broke that a television series based on the books could be ahead, people were less than excited. The books were amazing, the movies were pretty darn great adaptations, so why take a chance on ruining things with an unnecessary show?

If you’re wondering if your knee-jerk reaction lines up with the feelings of other fans, well – here are 13 quick responses to the news.

You can’t make exceptions for these kinds of things, they say.

In their minds, more Harry is good, full stop.

DAMN MAN I’VE BEEN WAITING FOR THIS MY WHOLE LIFE pic.twitter.com/FAWnvK6x1X

We have to show our solidarity.

Television seasons do give more time for development of characters and subplots.

I’m sure they’ll do new characters, but I wouldn’t hate getting a redo of the books, expanded. A season per book. Marauders flashbacks, pre-Harry days when Voldemort was powerful. That’d tickle my fancy more than new stories.

And it’s ok to feel that way, too.

I don’t know how to feel about this. I’ve always wanted an extremely faithful adaptation of the HP series that follows the books basically to the t (animated ideally). But I don’t really want JK Rowling getting any richer. https://t.co/po0Xyw3YrD

Bring on the Edward, baby.

We’re getting a new Percy Jackson on Disney+ and a new Harry Potter on HBOMax? All we need is a new Twilight series/film and we’ll be back in 2010 baby

Seems like Harry Potter is finally making a big comeback. This definitely has potential

No more is necessary when it lives in our hearts.

There are so many good books out there!

I’ll have to double-check, but I think they’ve already done a few movies about these books barely one (1) decade ago, so let’s put those movies on the streaming service and invest in new projects

That could be interesting.

I think the most intriguing storyline to explore would be Voldemort’s rise to power. It could show the lives of Tom Riddle and the Marauders (also pre-Death Eaters) at Hogwarts, and the timelines would converge in the final season.

But I guess that’s kind of the point.

Rowling getting nothing out of it and Emma Watson reprising her role would be the 2 conditions I’d need met to watch it, so I’d never watch it.

If this happens, it needs to be fresh stories and new characters. A completely different time period would be great.

But I’m afraid that perhaps those days have passed.

I AM ONCE AGAIN BEGGING HOLLYWOOD TO HAVE AN ORIGINAL IDEA

I told you! For me it’s like we dodged a bullet with an adaptation once (twice if you count the musical) an the third time could definitely not be the charm.

What are your thoughts on the matter? Share them with us in the comments!