The Wicked: who are Djimo and Roman Frayssinet, heroes of this crazy comedy by Mouloud … 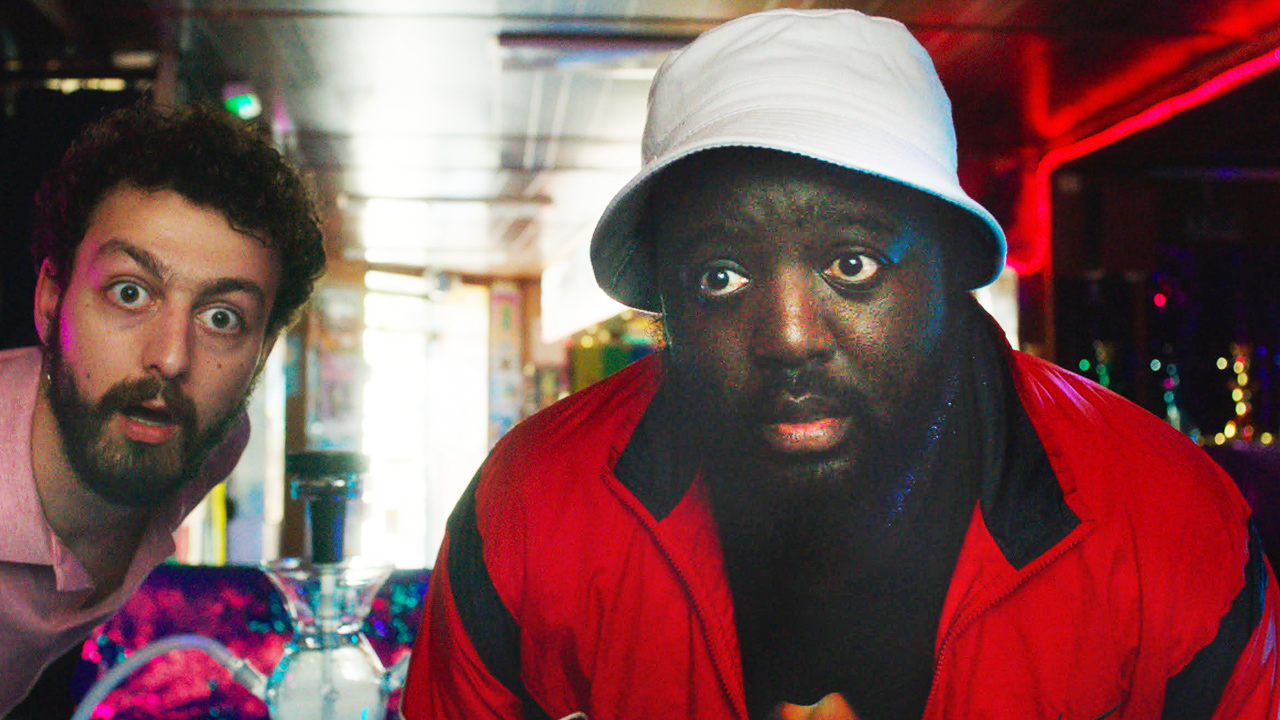 Roman Frayssinet and Djimo form a completely crazy duo in Les Méchants. Focus on these iconoclastic comedians revealed by Mouloud Achour in Clique.

Patrick and Sebastien are having the worst day of their lives. In a few hours, they become the most wanted Les Méchants in France. The reason ? A fake news edited from scratch by Virginie Arioule, presenter of a debate channel ready to do anything to gain an audience, even if it means making a deal with click traffickers.

To play the leading roles in this crazy comedy, Mouloud Achour has chosen two comedians revealed in his program Clique: Djimo and Roman Frayssinet. But who are these two young troublemakers from the French stand-up?

Djimo was born in 1990 in Limoges. The future humorist first embarks on a career as a specialized educator. In 2015, he packed his bags for Paris to change his life and make his dreams of comedy come true. He then launches into the stand-up by surveying the open stages. He goes through the Jamel Comedy Club and the Paname Art Café, looking for an original way to declaim his valves.

“At the beginning, I was like the others, I worked on energy, but it was not me, he confides. It took three years to find my character”, he confided in the columns of the Parisian in 2018.

That year, Djimo distinguished himself at Point-Virgule with his show 100% … or almost, a praise to the slowness in which he imposes his style. That same year, he won the Grand Prix at the Paris Comedy Festival and made a remarkable appearance at the Montreux Comedy Festival.

In 2019, Djimo became a columnist on the Canal + program Clique, presented by Mouloud Achour. Its pastille, “Dijmo takes his time”, allows it to make itself known to the general public. However, he does not abandon the stand-up and presents his sketches at the Apollo Theater in Paris and at the Splendid. Nonchalance, very slow flow, valves declaimed at the speed of an apathetic lazy, Djimo manages to make people laugh by taking the opposite view of the perfect hyper dynamic stand-uper.

His sketch, “I would have loved to be a turtle”, caused a sensation at the Montreux Comedy Festival. The video of his performance has so far received more than 11 million views. His style “slow valve” allows him to approach delicate subjects in a completely new light, such as the theme of slavery.

“Fortunately I was not born during this period. Me, I think that at that time I died in the boat. I have reached an age, I know what I am capable of, what I can do, and slavery, well, I don’t have the skills “, he declares in his show.

Easily recognizable with his “streetwear” clothes and his Bob screwed on the head, Djimo manages to slip into the world of cinema. In 2021, he starred in the action film The Last Mercenary with Jean-Claude Van Damme, released on Netflix. The same year, the comedian was featured in Les Méchants alongside Roman Frayssinet. Djimo will then return to the stage from October 14 at the Eiffel Tower theater.

“I took acting lessons with a coach for Les Méchants! I had played a small role as a security guard in a parking lot in J’irai ou tu iras by Geraldine Nakache and I played Ramzy’s manager in Rendez- you in the Malawas by James Huth, but I had never taken on a leading role.

The first day, I was terrified, everyone was looking each other in the eye because it was also a first for most. In addition, we started with a complicated scene outside with extras where we blocked a whole street, I was like “But do we really have the right to do that?” “, confides the comedian in the press kit of the film.

Born in 1994, Roman Frayssinet went to study screenwriting in Canada after a scientific bac. In 2013, while taking lessons in Montreal, the future comedian met Uncle Fofi, who made him debut on the stage of the Couscous Comedy Show.

Still in Montreal, Roman Frayssinet then trained at the National School of Humor before joining the La Comédie des Trottoirs troupe in 2015. The same year, he wrote his first show entitled Migraine, while doing the first parts of Kyan Khojandi or Blanche Gardin.

His second show, The, was performed in 2016. Since January 2018, Roman has hosted his own column, The Last Minutes, on Canal +, in the program Clique presented by Mouloud Achour. In parallel, the artist is playing his last show, Alors on the stage of the Théâtre de l’oeuvre in Paris.

After having obtained his first leading role in the cinema in Les Méchants, Roman Frayssinet will go on tour throughout France to perform his show. His last Parisian dates will be at the Olympia on November 22, 23 and 24.

“On my birthday, Mouloud Achour threw me:” I have a gift for you, tell me if it makes you happy “and he sent me the script. I remember, I was leaving for Montreal and I read it on the plane. I said to myself: “It’s too much of a bomb!” Anyway, I had already signed before reading, I have blind confidence in Mouloud.

It’s one of the greatest gifts I’ve ever had in my life. But I didn’t want to make films for the sake of making films, nor to be the “comedian who goes up a bit” that you have to put in a film. I had no ego conflict on it, I just wanted to participate in a quality film, intelligent and humble, to which I could add my little stone “, emphasizes Roman Frayssinet.