The Native American Origins of Lacrosse 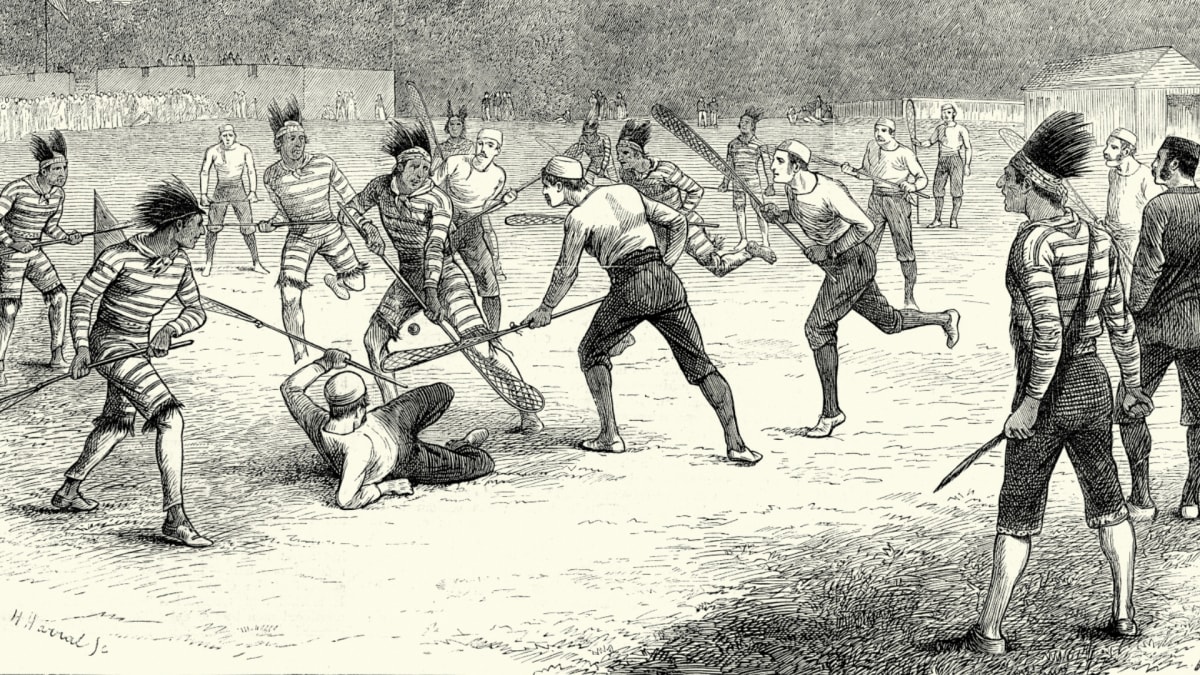 Lacrosse, the oldest team sport in the United States, dates back to AD 1100, when it was practiced by the Haudenosaunee, or Iroquois, in what is now New York and parts of Canada bordering the ‘State.

Early versions of lacrosse matches played by Native American nations included 100 to 1,000 or more men using wooden sticks, sometimes with attached baskets or mesh pockets, and small balls wrapped in deer skin. Nets formed from deer sinew. Fields without borders could stretch for miles and the games could last for days.

“Lacrosse was an integral part of Native American culture,” explains Joe Finn, archivist at the National Lacrosse Hall of Fame and Museum. “It was played to prepare them for war, and it was also a social event where the tribes got together for commerce and sport. It was sometimes used to settle disputes. “

Native American oral traditions cite the first game of lacrosse played between birds and mammals. Some Native Americans believe that sport was a gift from the Creator to be used for fun and as medicine.

Powless points to an original version of “rematriation” in which a young woman and a leader, living in the sky world, or multiverse space, must marry to save their universe from destruction. But her attention is drawn to a lacrosse player who later dives into a torn hole in the multiverse to save her, and they mate before she lands on Earth.

The influence of Europeans on lacrosse

In the 1600s in Quebec, French missionaries first saw Native Americans playing the game, according to Finn. “It was given the name ‘crosse’ because missionaries thought the sticks resembled the bishop’s cross worn in religious ceremonies,” he says.

The early Native Americans played the game barefoot, with no equipment, and with a loose set of rules. European settlers established stricter rules for the sport.

Lacrosse evolved in Canada, where it was named the national sport in 1859. In 1867, George Beers, a dentist from Montreal, wrote the sport’s first rulebook. “He once took a team of White and First Nations lacrosse players to England and played in front of Queen Victoria,” Finn said.

“The game… very pretty to watch,” the Queen wrote in her diary after the game between the Iroquois and the Canadiens, according to the National Lacrosse Museum and Hall of Fame. “It is played with a ball and there is a lot of running.”

Lacrosse as medicine for Native Americans

According to Powless, ceremonial medicine games are still practiced in Haudenosaunee communities to heal the sick. The Onodaga play an annual spring game with male participants of all ages.

“Players will show up without pads, without gear, just your wooden stick,” he said, adding that teams are determined by clan, house or age. “And the ages are the ones that can walk. You’re going to have 7-year-olds running with 80-year-old men on the same court.

Each community has its own rules and variations, he adds, and matches are often played without a timekeeper, penalties, or referees.

“Lacrosse isn’t just a game, it’s a medicine, it heals,” says Powless. “You hear over and over again how the spirit of the sport itself has healed people because they believe medicine speaks to the mind and soul.”

Lacrosse Today and Other Facts

Canadian John Flannery, who founded the American National Amateur Lacrosse Association in 1879, established lacrosse in the United States when he was transferred to Brooklyn by his employer, Finn says.

Contemporary lacrosse, dubbed “the fastest game on two feet” in 1921 by a Baltimore Sun sports writer, takes place on a field with players using sticks with a net attached to one end to catch, carry, pass and shoot a small rubber ball into the opposing team’s goal.

The first women’s lacrosse match was held in Scotland in 1890, and the first American women’s team was formed in 1926 at a high school in Baltimore. Lacrosse was played at the Olympics in 1904 and 1908, and as an exhibition sport in 1928, 1936 and 1948. In 2021, the International Olympic Committee granted the sport full recognition, paving the way for a possible return. of the Olympic Games in 2028.

Finn says the development of lighter, easier-to-handle plastic and metal clubs in the late 1960s and early 1970s made the game faster and increased the score.

But it is the spirit of the game that remains most important to Powless. It refers to the Thompson brothers, outstanding professional lacrosse players and members of the Onondaga Nation.