The Best Movies Leaving Amazon Prime at the End of February

If there’s an inherent flaw in February, it’s the way that it gives us less time to watch our favorite flicks before they depart Amazon Prime at the end of the month. That’s always a problem within the streaming landscape. Titles come and titles go, and it can be tricky if you want to revisit your favorite films or explore newer movies before their time expires. Luckily, we’ve already put together a list of the best movies leaving Amazon at the end of February. Whether you can make the time is still up to you.

Christian Bale had a star-making turn in American Psycho as Patrick Bateman. On the surface, Patrick has everything an ‘80s yuppie could want. A high-paying job, a beautiful fiancée, and creature comforts are all his. However, Patrick’s dark side emerges as murderous impulses, which he has no desire to control. If anything, Patrick is never more alive than when he unleashes his killer instinct on his unsuspecting victims. But as the police begin to suspect Patrick’s involvement in several disappearances, the titular psycho begins to question his life.

The Bad News Bears was one of the seminal feel-good sports movies of the ‘70s, and it still holds up nearly five decades later. Walter Matthau stars as Morris Buttermaker, an ex-MLB player who ends up coaching the Bears, a hapless youth baseball team. Morris gets the misfits to come together after recruiting two talented players: Amanda Whurlitzer (Tatum O’Neal) and Kelly Leak (Jackie Earle Haley). However, Morris’s success with the team is sorely tested by his rivalry with Coach Roy Turner (Vic Morrow) and his baseball team. How far will Morris go to make the Bears win?

Read Also:   The New Safari 15 in Monterey Features Can Be Tried Out Now

The Dead Zone is one of the best Stephen King adaptations, thanks in part to a haunting turn by Christopher Walken as Johnny Smith. After an accident leaves Johnny in a coma for five years, he discovers a psychic ability to predict the future when he makes physical contact with other people. Despite Johnny’s attempt to avoid using his power, a vision of Presidential candidate Greg Stillson (Martin Sheen) and his dark future forces Johnny into action. But how far will he go to prevent the apocalypse?

Dr. Strangelove or: How I Learned to Stop Worrying and Love the Bomb (1964)

Stanley Kubrick’s Dr. Strangelove or: How I Learned to Stop Worrying and Love the Bomb is a hilariously bleak comedy with a tour-de-force performance by Peter Sellers in three different roles. Sellers played the titular Dr. Strangelove, Group Captain Lionel Mandrake, and President Merkin Muffley as they faced a horrific doomsday crisis. When Brigadier General Jack D. Ripper (Sterling Hayden) goes renegade and orders a nuclear strike on the Soviet Union, the President discovers that he has fewer and fewer options as the final plane approaches its target. 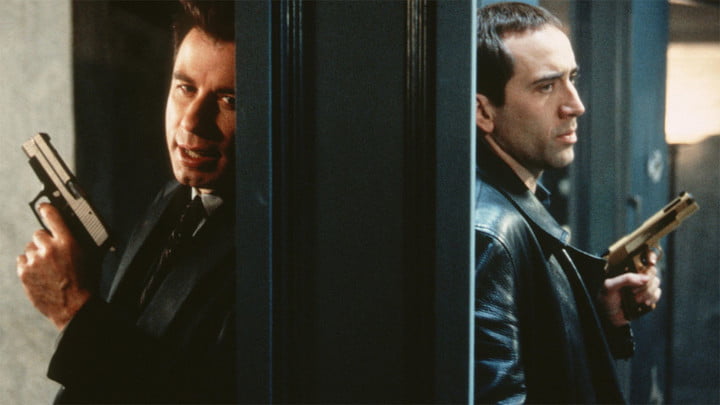 Face/Off has such a wild premise that it hasn’t been topped in decades. FBI Agent Sean Archer (John Travolta) has a vendetta against a terrorist named Castor Troy (Nicolas Cage). But to save a city from Troy’s massive bomb, Archer literally takes on Troy’s face and voice as his own to go undercover. Unfortunately, the real Troy awakens from his ordeal and takes Archer’s face and voice for himself. To Archer’s horror, Troy even infiltrates Archer’s family while hiding the truth about the face swap from Archer’s colleagues.

Bill Murray and Scarlett Johansson created a fantastic and enigmatic onscreen bond in Sofia Coppola’s Lost in Translation. Murray stars as Bob Harris, a washed-up Hollywood star who comes to Japan to film commercials. While staying at a high-end hotel, Bob befriends Charlotte (Scarlett Johansson), a young woman who feels alienated from her husband, John (Giovanni Ribisi). With no one else to turn to, Bob and Charlotte come to rely on each other. But even this relationship will be tested before the end.

Master And Commander: The Far Side of the World (2003)

Audiences didn’t quite know what to make of Master and Commander: The Far Side of the World when it hit theaters nearly two decades ago. It’s a nautical drama set in Napoleonic Wars starring Russell Crowe as Jack Aubrey, the captain of the HMS Surprise. After a disastrous encounter with the French privateer ship, Acheron, Aubrey, and the crew of Surprise find themselves struggling to survive and regroup. Aubrey’s friendly tension with his ship’s surgeon, Dr. Stephen Maturin (Paul Bettany), also provides some dramatic muscle for this terrific film.

Angelina Jolie had a rare action turn in Salt, a movie that cast her as CIA agent Evelyn Salt. Despite her apparent success and her marriage with Mike Krause (August Diehl), Evelyn’s life is destroyed when a Russian defector, Oleg Vassily Orlov (Daniel Olbrychski), accuses her of being a double agent. To save herself, Evelyn is forced to go on the run while her colleague, Peabody (Chiwetel Ejiofor), chases her down and tries to determine the truth about her loyalties. And Evelyn’s secrets go even further than Peabody suspects.

Ben Affleck directed, co-wrote, and starred in The Town, a crime thriller that helped extend his career comeback. Affleck portrays Doug ‘Duggie’ MacRay, a man hopelessly lost in a life of crime with his buddies Jimmy ‘Jem’ Coughlin (Jeremy Renner), Albert ‘Gloansy’ MacGloan (Slaine), and Desmond ‘Dez’ Elden (Owen Burke). During a bank heist, the group kidnaps a bank manager named Claire Keesey (Rebecca Hall). After releasing Claire, Doug becomes infatuated with her. However, he has to hide the affair because she has information that could send him and his friends to prison. And that’s something that Jem would be willing to kill her for.

What is Intel XeSS, and how does it compare to Nvidia DLSS?