The Best and Most Useful iOS 14 Widgets 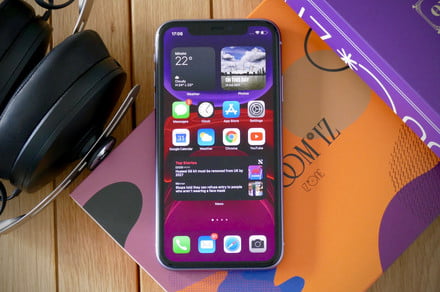 We all know that iOS 14’s best new feature is the ability to add widgets to the home screen. While you could use widgets in the Today View in previous versions of iOS, putting them anywhere you like on your iPhone represents a big step forwards in customization. Thanks to this ability, you can now get the weather forecast for the next few hours without even opening an app, or you can learn the latest stock movements with a single glance.

Not all widgets are created equal, however. In this article, we round up 10 of the best and most useful iOS 14 widgets. These range from the utilitarian and informative to the fun and helpful, so they’ll have you covered whatever your leanings are.

Merriam-Webster Word of the Day

Regardless of whether we’re native or highly fluent English speakers, most of us could benefit from learning a new word or two. Well, the Merriam-Webster Dictionary app lets you do just that with its Word of the Day widget. It’s as simple as it sounds, with the widget displaying a new fancy word each day. It does, however, give you the option of two different widget sizes: A smaller square, which simply shows the word of the day, or a larger rectangle, which also displays the word’s definition, pronunciation, and grammatical classification. Excelsior!

If you’re an Apple loyalist, you’ll be pleased to hear that the iPhone’s native Calendar app has a home screen widget that will display the date and any events you have coming up. However, if you’d like to try a third-party calendar app, Fantastical is one of your best options. Not only is it a powerful calendar and personal organizer, but its iOS 14 home screen widget offers a great way of keeping up with your appointments, events, and daily tasks. One advantage it has over the native Calendar widget is that its own widget offers more options as to what is displayed in it, ranging from a simple date and time to a full calendar with the weather, your events, and any important dates.

Okay, so not everyone on the planet is a soccer (i.e. football) fan, but if you’re crazy about Liverpool, Barcelona, Juventus, or Bayern Munich, the FotMob app offers a nice iOS 14 widget that lets you stay up to date with the latest scores. You can choose which teams and players to follow when setting up the app for the first time, while the widget options range from the latest football news to the most recent results for your favorite teams.

It may not be as well known as certain other budgeting apps, but Daily Budget Original is one of the few budget apps that currently offers a home screen widget (it’s also well-reviewed in the Apple App Store). On its own, it’s a fairly simple yet effective app that lets you enter your monthly/daily income and expenses, while tracking how much you’re saving each day and how well you’re moving toward your savings goals. Accordingly, its widget displays this information, showing your income for the day and your projected savings, which will vary according to the information you’ve entered into the app. One other good budgeting with a home screen widget is Copilot, although you’ll need to pay a monthly subscription of $9 per month to access most of its features.

Here’s one for the film and TV buffs among us. As you probably know, IMDb (the Internet Movie Database) is one of the best places on the web for info and news related to movies and television (and more). It also offers its own app, which has now been updated to include a home screen widget. Its widgets offer a choice between film news, popular movies, and popular trailers, depending on the size and type of widget you choose. It’s a great way of keeping track of the latest goings-on in Hollywood.

2020 hasn’t quite been the best year in the history of human civilization, so most of us could probably benefit from some extra motivation and emotional support. This is where Motivation – Daily Quotes comes in. It’s a motivational app that feeds you particular quotes on a regular basis, with the selection of quotes varying according to your preferences and goals. Its widgets for iOS 14 work exactly on this basis, displaying inspirational quotes from historical figures and celebrities, and updating them throughout the day. It may not do much more than that, but it really can take the edge off stress and anxiety.

Do you walk 10,000 steps per day? Here’s your chance to find out for sure, since the Pedometer++ app now offers a home screen widget that shows you the steps you’ve taken today. The app itself can be used to set goals for the total number of steps you take each day, while it can also measure the distance you’ve walked and the floors you’ve ascended. Its widgets summarize this info in a handily compact form, meaning that you don’t really ever have to open the app again, except if you want to change its settings or look at your hourly breakdown in more detail.

Apollo is an excellent app for Reddit users that acts as a streamlined portal to the social network, making its posts and features more accessible and engaging. It includes such features as a handy Jump Bar (which lets you switch quickly between subreddits), fully customizable gestures, and a very slick Media Viewer. The app’s home screen widgets offer a distilled window into various subreddits, from jokes and shower thoughts to inspirational photographs. It’s very useful if you don’t have time to actually browse through Reddit yourself.

If you’re planning a vacation or voyage in the not-too-distant future, TripIt is a fantastic way of preparing for it. The app lets you create and view itineraries for your travels, simply by forwarding emailed reservations and bookings to its email address. From there, it adds all the necessary info to the app. As for the app’s widget, it shows you the next stop on your itinerary, whether this be the airport or the hotel.

To finish off this list, we have to mention a well-recognized email app that has rolled out a widget. Spark combines all of your email accounts into one app, regardless of what platform it’s on. It offers a relatively broad range of widgets for iOS 14, including those that display your latest emails, as well as those that display your calendar and latest events. It’s beneficial if you’re on the go and don’t have time to dip into your inbox and check emails directly.

We want to note that Apple designed various native widgets for the iOS 14, built on top of several of its most handy apps, including Music, Clock, Photos, Notes, News, Stocks, and Weather, amongst others. While the third-party widgets on this list can help you use your phone more efficiently, many native widgets can also streamline your phone, so they’re worth checking out.

Also, developers are always updating their apps, so it’s always worth checking your favorite apps to see if they’ve introduced a widget for iOS 14. To do this, hold down on an empty space in the home screen, and then tap the + button in the top-left corner. Doing this pulls up the widget screen and shows you all of the widgets available to you. The list is customized based on the apps you have downloaded to your iPhone.