The Best 360-Degree Camera Apps for iOS and Android

Today’s smartphones have made amateur photographers of all of us. But as smartphone photography became ubiquitous, the intriguing 360-degree spherical panorama came into vogue. A 360-degree photo lets you observe a scene in any direction from a single point of view and today’s smartphone apps make it easy to accomplish — you don’t have to do anything except use a dedicated app and move your smartphone around you to capture and view a scene.

With standard panoramas, you shoot while revolving around your own axis, but without the up and down parts. When you shoot a 360-degree spherical image, you capture every point around you in all directions, side to side and up and down. Sometimes 360-degree images are referred to as 3D or VR, though with 3D, the camera also captures depth information, which can be used to create 3D models that let you move through environments. Since you can view 360-degree images and spherical panoramas through VR headsets, from Google Cardboard to the HTC Vive Pro, referring to them as VR is not too much of a stretch. These 360-degree images are also viewed as panoramas where you simply spin the phone all around you or slide your finger on the touch screen to view a quasi immersive scene.

Before the iPhone, the only way to capture a genuine spherical panorama was to use a special camera designed for the task and employ stitching software to bind multiple shots together — and you can still do that. But today’s photo apps make it possible not only to shoot 360-degree images, videos, and panos, but to instantly share them privately or via social media platforms like Facebook, Instagram, or YouTube. Here are some of the best 360-degree camera apps available for iOS and Android.

Read Also:   The Best iPhone 6S Plus Cases and Covers

When you’re in the middle of nowhere and you need to show the world what it looks like, the free Google Street View app, with its built-in 360-degree camera, is where it’s at. The app is a viewer that lets you see public 360-degree panos from photographers all over the world, but the best part is that you can create spherical images of your own to share on Google Maps. Create 360-degree photos using your phone’s camera (or a certified Street View Ready camera), then position them and add connections on the map with the Street View app. Just choose the Camera and the interface will guide you through the recommended series of shots to create your pano. Your images stay private until you upload them. A new video mode lets you record as you walk, cycle, or drive and preview the final results before publishing to Street View. You can also track your video mode collections on a map to determine the distance traveled.

DMD Panorama gives you the complete 360-degree turnaround capability for panoramas and selfies, allowing friends to see your 3D photo even without the app. It works well in low light, exports 360 panos as looping videos, and lets you experience VR with Google Cardboard. Panoramas can include advanced camera controls like flash modes and various exposure settings alongside added descriptions, tags, geolocation, and privacy settings. The app shoots only cylindrical panoramas, and only stitches images shot with the app — uploading only with permission. The Android version is free with in-app purchases, but the iOS version costs $5.

Read Also:   T-Mobile offers the fastest 5G in the US, but not always the best 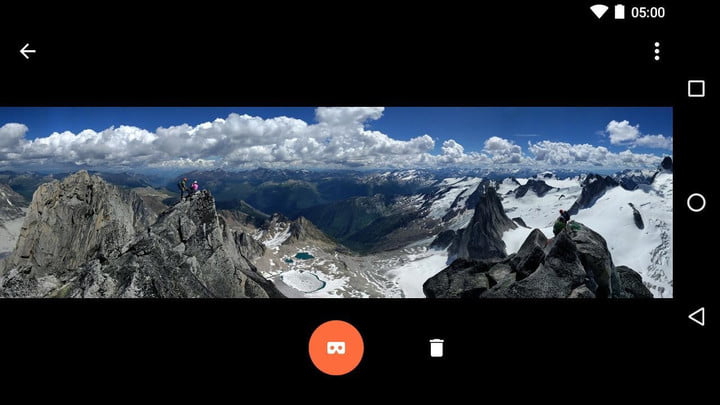 With Google’s free Cardboard Camera for Android, you can capture and share 3D VR photos designed for viewing in Google’s companion Cardboard App and compatible headsets. It’s extremely easy to use; just open the app, and at the bottom right, tap Take Picture, then tap Record. With your arms outstretched, hold the device in portrait mode and move slowly in a circle to the left or right. The camera stops recording automatically when you complete a full 360-degree turn. These photos offer more accurate distance and object perspective so that nearby objects actually look nearby and objects farther away maintain a realistic, proportional distance. To experience the app’s VR output, place your phone into a Google Cardboard viewer. The new release lets you share images using the phone’s default gallery app.

This automated panorama stitcher lets you easily stitch individual photos into high-quality panoramas via an intelligent on-device algorithm. The app recognizes and merges multiple overlapping photos into panoramas. Just select or capture two or more overlapping images and the app will stitch them into a sharable pano for social media. It features a 3D VR viewer, various rendering and projection options, exposure balance, preview mode, and more. The pro version for $3 removes the ads, offers 1GB output, compression, color balance, and other advanced features.

With either your iPhone or Android smartphone, Panorama 360 lets you capture the view around you. The app stitches shots quickly and lets you view in its own 360-degree viewer. The app also supports Google Street View photos and iPhone panos and includes automatic geotagging. After reviewing your shot, you can upload your panos to share with friends and family or embed them in your website or blog. You can also directly upload images to Facebook, Twitter, and Tumblr. The app connects you with other users for sharing their collections and you can view panos via a 3D viewer or as flat images. An in-app purchase of $3 gives you an HD option for high-resolution panoramas. 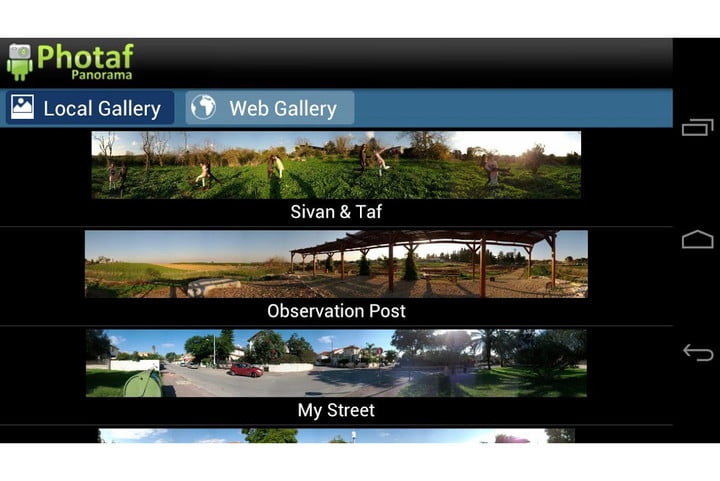 Photaf, an Android-only app, is often targeted to real estate professionals because it lets you easily create seamless 360 panoramic photos using your camera’s orientation sensor to detect the exact angle of each picture.  The app features 360-degree panorama creation, automatic image stitching, and Facebook sharing. Just launch the app and start moving your phone around to see the complete panoramic view by using the phone’s compass or the touch screen. The Pro version costs $4 and lets you upload images to the company’s website and view them from your computer. It also provides HD, live wallpaper creations, and is ad-free.