The Air Force admits the F-35 fighter jet costs too much. So it wants to spend even more. 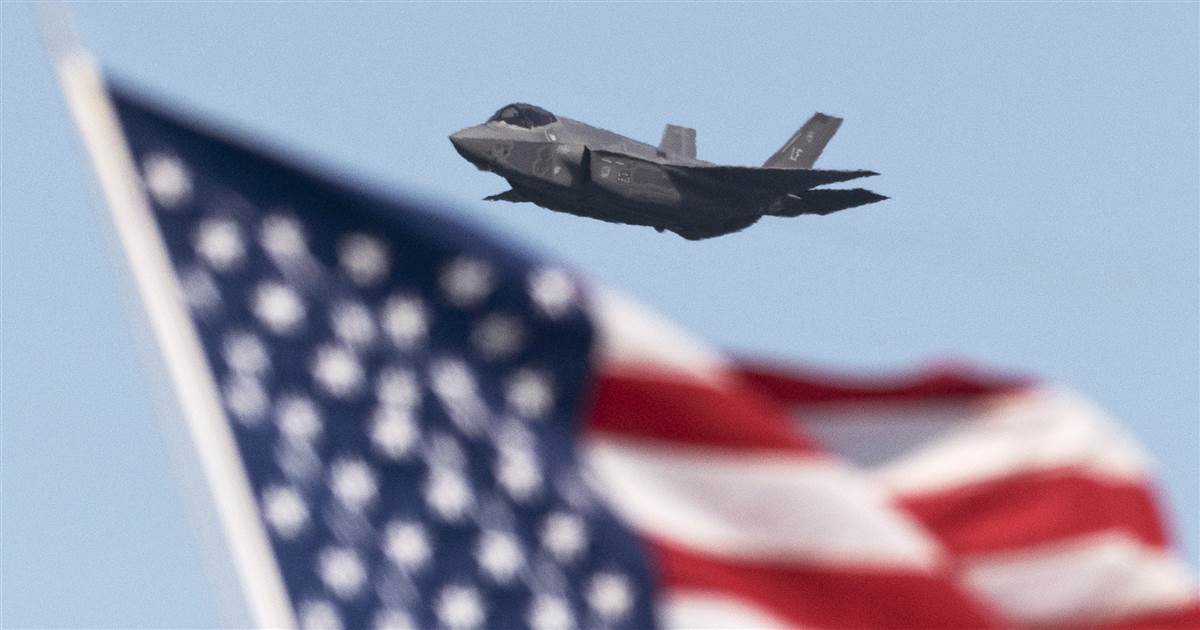 The Air Force is now considering a replacement for its F-16 fighter jet replacement.

With an estimated lifetime cost of $1.6 trillion, the F-35 Lightning II, conceived as a versatile, super stealthy next-generation fighter plane, is the most expensive weapon system ever built. When the program began way back in 1992, the F-35 was supposed to be an affordable one-size-fits-all solution for the Air Force, Marine Corps and Navy. It took until this February for the Air Force to publicly admit that the F-16 replacement failed the affordability test.

Lockheed Martin claims that it could reduce operating costs to $25,000 per hour by 2025 — but only if it’s awarded an exclusive maintenance contract.

On Friday, Rep. Adam Smith, the top Democrat on the House Armed Services Committee, verbalized the long-simmering frustration with the massive program’s costs and persistent technical problems when he said he wanted to “stop throwing money down that particular rathole…Is there a way to not keep spending that much money for such a low capability?”

But, the solution the Air Force is considering could make the problem worse: Spend more money on another new jet to replace the F-16. Developing and procuring a brand-new non-stealth fighter to save on operating costs only makes sense if it doesn’t end up costing as much as the F-35 did. And that would mean defying history.

Defense programs fail spectacularly all the time, and there is no sure way to prevent that. The services and manufacturers often promote ambitious programs with overly optimistic cost assessments, only for developmental difficulties to trigger spiraling delays and cost overruns. Sometimes programs, like the littoral combat ship, take so long that the strategic rationale behind them is no longer relevant by the time they’re ready.

But the Pentagon and members of Congress overseeing the defense budget do at least have one advantage in designing yet another plane: They can learn from their mistakes in the F-35’s development.

To be fair, it’s important to acknowledge that part of the F-35’s promise has been realized — the price of the variant of the F-35 used by the Air Force has fallen to below $80 million, cheaper than some advanced contemporary non-stealth fighter planes.

And while critics love to pile on the F-35 for being over budget and less agile than its predecessors, in fact not everything about the F-35 is a failure. Its stealth characteristics make it far better than an F-16 for penetrating airspace guarded by modern air defense missiles. The Lightning also has advanced sensors and communication systems it can network with friendly forces to enhance their effectiveness as well.

But there are also many missions, like routine patrols of U.S. airspace and bombing insurgents that pose no threat to a high-flying U.S. fighter jet — the kinds of combat missions flown by U.S. F-35s so far — that don’t require these premium capabilities. And the F-35 isn’t optimized for missions over long distances — important when confronting China’s military activities in the Pacific Ocean — and could be vulnerable if caught up in close-range air-to-air combat.

And even the relatively low $80 million-per-F-35 price tag is deceptive, because the F-35 has proven so expensive and challenging to maintain that every hour an F-35 is flown costs $36,000 on average, compared to $22,000 for an F-16. By an alternate metric, the F-35 is over three times more expensive per hourto fly.

The plane’s builder, Lockheed Martin, claims that it could reduce operating costs to $25,000 per hour by 2025 — but only if it’s awarded an exclusive maintenance contract. The Pentagon appears to be rightly skeptical.

The high operating costs are tied to a persistent shortage of spare parts and over 800 continuing defects that are still being corrected. At this very moment, F-35 fleets are receiving a projected $16 billion upgrade to software and other components that’s already two years behind schedule and $1.5 billion over budget.

All these developments apparently have the Air Force coming around to the idea that the bill for using the F-35 for routine tasks is just too high. The Navy has already reduced its F-35 buy and the Marine Corps is expected to as well (though, to be clear, even if the Air Force downsizes its order as seems probable, hundreds more are still likely to enter U.S. military service and the jet will also remain in demand for export abroad.)

As Air Force Chief of Staff Charles Q. Brown Jr. put it in announcing a new study looking at options for an F-16 replacement: “You don’t drive your Ferrari to work every day, you only drive it on Sundays. This [the F-35] is our ‘high end.’ We want to make sure we don’t use it all for the low-end fight.”

This is a legitimate issue. But the Air Force needs to seriously consider whether it has to develop a jet from scratch once again. It could instead order the heavily upgraded (and already developed!) non-stealth F-16 Block 70/72 model, which features new computers and a capable new radar. The Air Force is also currently procuring heavier, longer-range Boeing F-15EX non-stealth fighters, which should fall between the F-16 and F-35 in operating costs at $27,000 per flight hour.

But Brown indicated that he instead wants a new plane with a more easily upgradeable computer system, greater speed and some lower-level stealth characteristics in between that of the F-35 and F-16. Such improvements are only worthwhile if they can be achieved within a reasonable cost and timeframe by incorporating proven technologies.

One of the F-35 program’s chief flaws was that it attempted to develop too many brand-new technologies at the same time. Because the Lightning’s systems were constantly evolving, they never had a consistent baseline from which to integrate them all. This resulted in huge delays when one evolution disrupted the planning for others.

Going forward, the Air Force could save time and money by focusing on just one or two major innovations while elsewhere using technologies that have already been developed. The airframe of the plane could always be designed with spare capacity for future technologies.

The replacement plane should also not be a compromise designed to meet requirements from the Navy and Marines as well as the Air Force. The supposed cost-savings of doing so with the F-35 proved illusory, as the three models only ended up sharing 20 percent of their parts in common. The result was a Franken-plane that posed problems for all parties involved.

The Pentagon also needs to retain user rights over not just the airframes, but the support systems of the aircraft it’s ordering. Right now, Lockheed continues to claim proprietary ownership of the F-35’s computer systems and documentation. So when an Air Force programming team developed a replacement for the Lightning’s notoriously dysfunctional ground-based computer system, it was met by Lockheed with intellectual property disputes.

Finally, the Air Force can’t undertake a multi-decade development process like it did for the F-35. Outgoing Air Force procurement chief Will Roper has suggested that new computer-modelling technologies could be used to dramatically reduce development time and costs. There are risks with this approach, such as less extensive testing that could result in more accident-prone aircraft and shorter service lives. But it would be worth trying — so long as the new program isn’t allowed to become “too big to fail” like the F-35 was.

If this new program to replace the F-16 proves unable to produce a viable aircraft on budget and on time, it should be possible to kill it early on before it gains too much political momentum and sunk costs, freeing the Air Force to pursue a more viable solution—and freeing taxpayers from shouldering another runaway defense program.

After all, the Air Force has other irons in the fire, ranging from improved versions of older jet fighters to an advanced next-generation stealth jet and new AI-operated wingman drones. For a low-cost replacement to truly succeed, then, it must be allowed the possibility of failure.