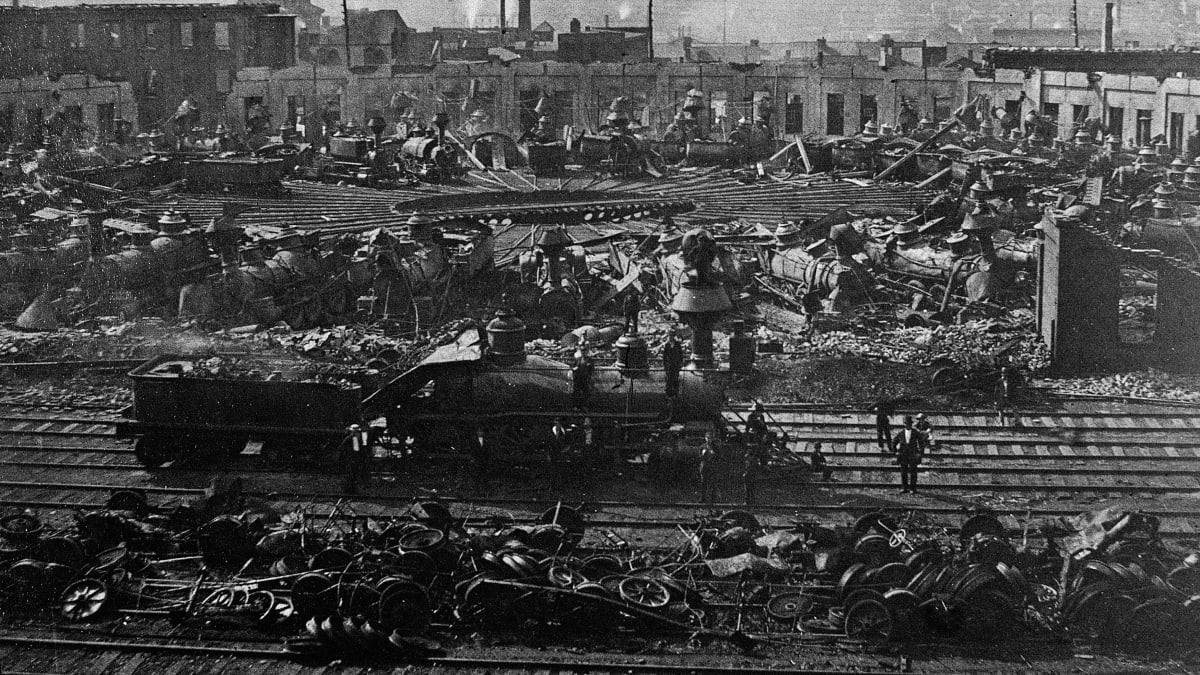 In the summer of 1877, the United States experienced its first multistate railroad strike. Beginning in West Virginia, the strike quickly spread to other parts of the country and even escalated into a general strike in some cities. The protest involved some 100,000 workers, making it the largest in the country’s history at the time, and disrupted major railway lines.

Railroad companies and elected officials ended the strike by sending militias to attack the workers, resulting in around 1,000 arrests and 100 deaths. Although workers in some towns won small gains by striking or threatening to join the strike, the 1877 uprising did not lead to widespread victories for railroad workers.

It did, however, demonstrate the key role railroad workers played in the United States and the power they wielded if they stopped working at the same time. The strike of 1877 was notable in that it did not involve any organization at the national level. Rather, its spread was a spontaneous reaction to pay cuts and poor working conditions during an economic depression.

A wave of spontaneous strikes

The 1877 strike took place in the midst of the Long Depression, an economic downturn beginning in 1873 in which wages fell and poverty and homelessness increased. It was in this desperate climate that on July 16, 1877, workers at the Baltimore and Ohio (B&O) railroad station in Martinsburg, West Virginia, went on strike to protest railroad wage cuts.

“There is good evidence to suggest that railroad owners, at least informally, colluded to cut workers’ wages,” says Cal Poly Pomona history professor John P. Lloyd, who wrote on the strike of 1877 in the The Encyclopedia of Strikes in American History. After the B&O Railroad cut wages, the Pennsylvania Railroad and others soon followed.

The Martinsburg strike began as a local labor action, but within days it spread to Pittsburgh, where the Pennsylvania Railroad was already wildly unpopular. Many Pittsburgh residents felt the company had outsized influence in the city and supported the railroad workers who went on strike. When the government sent in the Philadelphia militia to break the strike (the Pittsburgh militia had refused), the workers set fire to the railroad depot rotunda while the militia was inside.

From Pittsburgh, the railroad strike of 1877—which was really a wave of strikes—spread west to cities like Chicago and St. Louis. In these and other cities, the railway workers’ strike turned into a general strike as non-railway workers joined in protest over poor wages and working conditions.

The wave of strikes affected nearly every major railroad in the United States, and elected officials and railroad companies responded by deploying local and state troops and private militias. Additionally, President Rutherford B. Hayes deployed federal troops to attack the workers.

“He actually used the provision of the constitution [regarding] insurgencies,” says Troy Rondinone, professor of history at Southern Connecticut State University and author of The Great Industrial War: framing class conflict in the media, 1865-1950. “So he was basically saying it was an insurrection against the country.”

Although the strike lasted varying lengths in different locations, it was largely over by early August.

When the 1877 strike ended, most railroad companies failed to respond to workers’ demands. In Louisville, where white railroad workers decided not to strike, these workers ended up avoiding pay cuts by siding with the Louisville and Nashville Railroad (L&N) against a general strike by black workers.

L&N Railroad workers “were very threatened by this idea that black workers were organizing, and so many white workers in Louisville actually supported the company and even formed their own militia to protect railroad property. says Shannon M. Smith, a history professor at the College of St. Benedict and St. John’s University who wrote about the 1877 strike in Louisville. “So rather than side with the other workers, they side with the company.”

One of the major impacts of the strike was the increased presence in American cities of local militias that later became the National Guard. After 1877, these militias began to build imposing armories in working-class neighborhoods. Indeed, the strike had demonstrated the power of national union organizing at a time when there was no national railway union, only job-specific brotherhoods of railway workers. The scope and scale of the 1877 strike rattled corporate executives and elected officials.

Nearly two decades later, the American Railway Union—considered the first major railroad union—played a pivotal role in the Pullman Strike of 1894 and marked a turning point in national labor organizing. Yet racism remained a factor in union activism. Although some white and black workers organized together during the general strikes of 1877, exclusionary racism among the railroad brotherhoods continued with the American Railway Union and in many other labor unions until in the twentieth century.