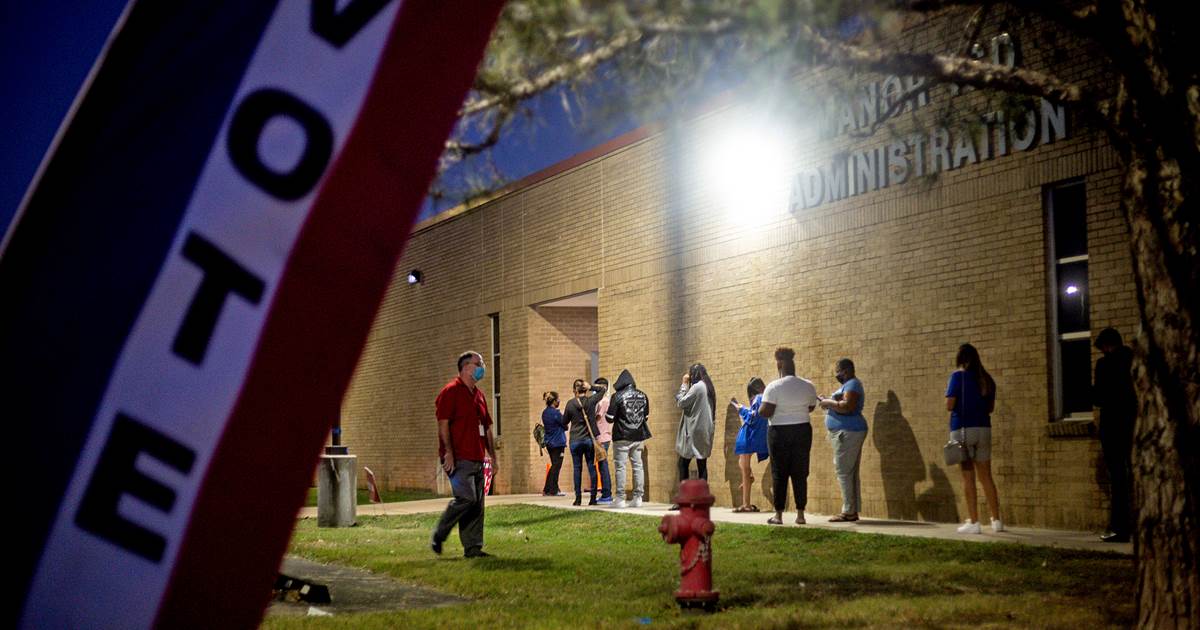 The legislation would impose criminal penalties for errors during the election process, such as making it a felony for an official to give a voter an absentee ballot application or solicit the submission of an application if the voter does not request it first.

The measure, House Bill 6, is one of dozens of restrictions being considered by the Texas lawmakers this session. While the bill says it aims “to reduce the likelihood” of voter fraud in elections, there is no evidence of widespread voter fraud in Texas or elsewhere. Gov. Greg Abbott, a Republican, made election integrity a priority for the legislature.

It is expected to head to the House floor after it passes through the Calendars Committee, which decides the legislative schedule.

“This is a bill that’s going to disenfranchise voters and make ballot access harder,” said Rep. John Bucy III, a Democrat on the House’s Elections committee.

One of the most concerning aspects of the bill, critics say, is how Texans who are assisting voters with a ballot would be required to fill out a form explaining how their help is needed. This is on top of an oath that they won’t say or signal how a voter should cast their ballot. An inadvertent violation of that oath — like pointing to a name on a ballot — could result in a criminal offense, advocates said.

“H.B. 6 definitely makes it scarier to participate in elections, it has a host of criminal provisions, new ones and ones that are enhanced including third degree felony — in Texas, a more common third degree felony is kidnapping,” said Thomas Buser-Clancy, a senior staff attorney with the American Civil Liberties Union of Texas.

Activists have pushed back against this and other restrictive election bills under consideration.

Around the same time the bill advanced out of committee, progressive activists from the Latino advocacy organization Jolt Action and youth-focused group NextGen America in Texas dropped tens of thousands of flower petals in the Texas Capitol Rotunda to symbolize young people of color who come of voting age each year in Texas.

Over 275,000 BIPOC youth turn 18 and are eligible to vote in Texas every year. 🌹 This morning we demonstrated the power & resilience of young voters by dropping over 250,000 rose petals from the rotunda at the capitol. Mess with people of color and we’ll be a thorn in your side! pic.twitter.com/YYtelL0BTg

Former Georgia gubernatorial nominee Stacey Abrams, a Democrat and founder of the voting rights group Fair Fight, said the Texas House measure “won’t just restrict voter access, it will criminalize voting with harsh penalties. Voters and business leaders must speak up while there is time to stop it from becoming law.”

“Free, fair, equitable access to voting is the foundation of American democracy,” he tweeted. “Those rights — especially for women, communities of color — have been hard-earned. Governments should ensure citizens have their voices heard. HB6 does the opposite, and we are opposed to it.”

“Texans are fed up with corporations that don’t share our values trying to dictate public policy,” Texas Lt. Gov. Dan Patrick said in a statement.

Texas has led the nation in the number of proposed election restrictions, but former President Donald Trump’s repeated falsehoods about the election being stolen from him has inspired an avalanche of election-related bills nationwide. By all accounts, the 2020 election was secure and the results were accurate. Trump’s attorney general, William Barr, said there was no evidence of widespread voter fraud, and Trump’s legal efforts to overturn the results failed in courtrooms around the country.

State Republicans across the country, many of whom supported Trump in his false claims about the election, say voter restrictions are important to restoring trust in the election process.

“The bill is needed because Americans no longer trust the system,” Patrick said in a press conference defending Texas’ legislative work on the Senate measure. “When you suggest we’re trying to suppress the vote, you are in essence, between the lines, calling us racist, and that will not stand!”

Jane C. Timm is a political reporter for NBC News.