Teenager Asks if She’s Wrong for Telling Her Dad That His Girlfriend Didn’t Buy Her a Starbucks Drink. Is She a Jerk?

I’ll tell you one thing: if someone is supposed to get me coffee and they don’t follow through, we’re gonna have some serious issues.

Read on to see what exactly went down in this story from Reddit’s “Am I the A**hole?” page.

I’ve only ever stayed at my dad’s on weekends so it’s been hard getting used to living with his gf and her kid full time. The kid is super whinny and pretty spoiled because gf dotes on her so I usually just stay in my room.

Today gf was taking her daughter on a “special outing” because she passed a math test, and my dad suggested I go with them for a “girls day out”. I wanted to say no but I knew that he wanted me to get to know his gf and gf’s daughter better so I agreed. He gave gf $300 to spend during the outing.

We spent the day going in and out of stores gf’s daughter liked in the mall complex. Gf ended up buying her a s**t ton of clothes, makeup, and other stuff I don’t remember. On our way back home gf stopped at the Starbucks because my daughter wanted a drink and some cake pops.

She ordered a drink for her and her daughter and 2 cake pops. I asked her if I could get something and she said she ran out of money and she’d “get me something next time”.

When they got their order I asked if I could have one of the cakepops and gf said that it was her daughter’s treat for hard work and it would be wrong for me to take one since “I didn’t do anything that deserved being rewarded”.

I’m not gonna lie, I was pretty upset. When we got back home my dad saw their drinks and asked where mine was. I told him that “I wasn’t allowed to get one cause I don’t deserve it”.

His gf got upset and said I was twisting her words and the daughter just said I was being greedy and was jealous of her. I know I’m not entitled to a drink or a cake pop but I also don’t think it’s wrong to be a little annoyed.

One person said she’s NTA and that she deserved whatever she wanted. 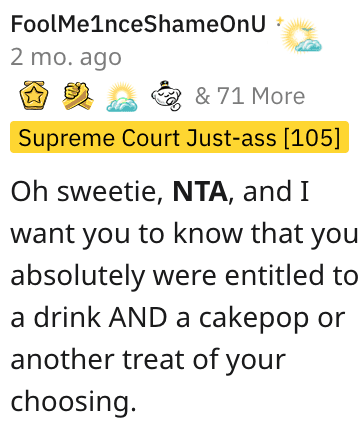 Another reader agreed she wasn’t wrong and said they should be ashamed for the way they treated her.

And this individual said that she deserved all this stuff for putting up with her dad’s girlfriend, who sounds like a nightmare. 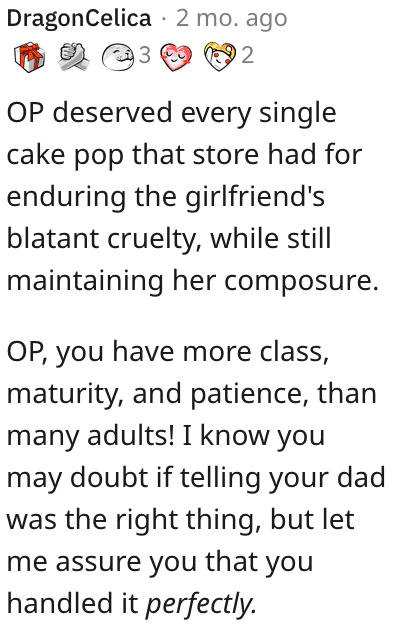