But kids have feelings, too!

Check out this teen girl’s story and see if you think she’s out of line for not wanting to go to her dad’s house anymore.

Dad started dating Jane a while ago, maybe a year. She has a daughter Mandy that’s 12 or 13 I think. Then they started spending A LOT of time by my dad’s. They have their own apartment but they’re still always by him.

The first time they stayed over when I was there somehow Mandy ended up in my bed. Her mom has this cot/bed thing she brought by my dads for her but somehow I woke up in the middle of the night and she was in my bed. I kicked her out. Then my dad and Jane said “that was mean and I have a full anyway so I should share”.

There’s other stuff, I have a chair in my dad’s living room I got for my a gift. It’s comfy and when I move out it’ll go with me. Well Mandy always wants to race for the chair, even when I win the “race” my dad makes me let her sit in it because they’re guests.

So I end up sitting on the floor because my dad has a recliner and Jane lays across the couch. So I stay in my room instead, my dad’s tried getting me to come out there by them, but why when I have to sit on the floor like a dog? He keeps saying “I’m being a difficult teenager ” that’s not it though.

One time my mom and I went and did some stuff before she dropped me off. She had bought me a blanket that had my favorite teams logo on it. I was excited to sleep with it (stupid I know) so she let me take it by my dads. My dad made me “share” it with Mandy, because it wasn’t fair that I got something and Mandy didn’t.

It’s not just the blanket it’s happened with it’s anything that I have I have to share, but if Mandy has something I’d like to use he tells me it’s hers and if she doesn’t want to let me she doesn’t have to.

One time mandy was reading one of my books, and Jane and my dad started fighting, Jane wanted to leave so Mandy wanted to take my book but I said no. So she wouldn’t leave. My dad yelled at me to “just let her have it”. They made up so I got it back, but if they didn’t I would have lost one of my favorite books.

My dad and I had plans to go ice fishing, just him and I something we’ve done since I was 7. Well he brought Jane and Mandy along. All they did was complain, “it’s to cold” “fish are gross” “this is boring “. So we left early. He said “sometimes you have to compromise”.

When I got home I was mad, my mom was annoyed and called him and they argued and he talked to me and repeated his compromising c**p.

I was supposed to go back by him a few days later but decided I didn’t want to, I never even spend time with just him anymore so what’s the point in going there.

I told my mom she said it was my choice. So we told him, he said “I’m just used to being a only child and I can’t be spoiled my whole life”. And “I can’t run away whenever there’s a problem “.

Well since then, his family is trying to get me to go back too.

AITA for not visiting my dad anymore?”

This reader said this girl’s father is failing her as a parent. 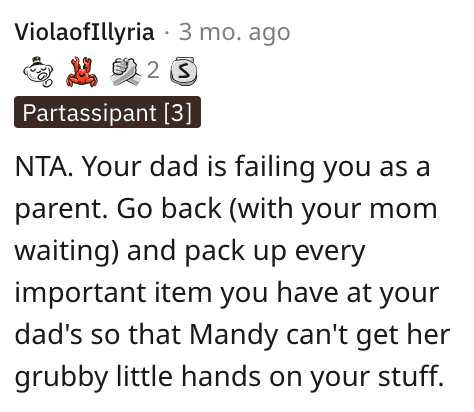 And another individual agreed and said her father’s behavior is pretty disgusting. 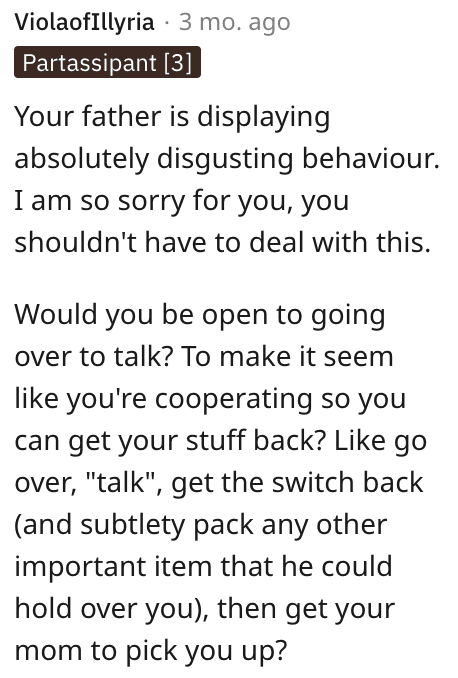 This Redditor said it simply: this girl’s dad SUCKS. 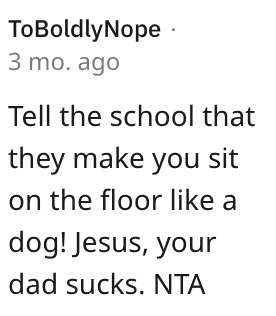 She Shaved Her Head Before Her Cousin’s Wedding. Was She Wrong?