Teen says he was questioned about his age, separated from parents at the border 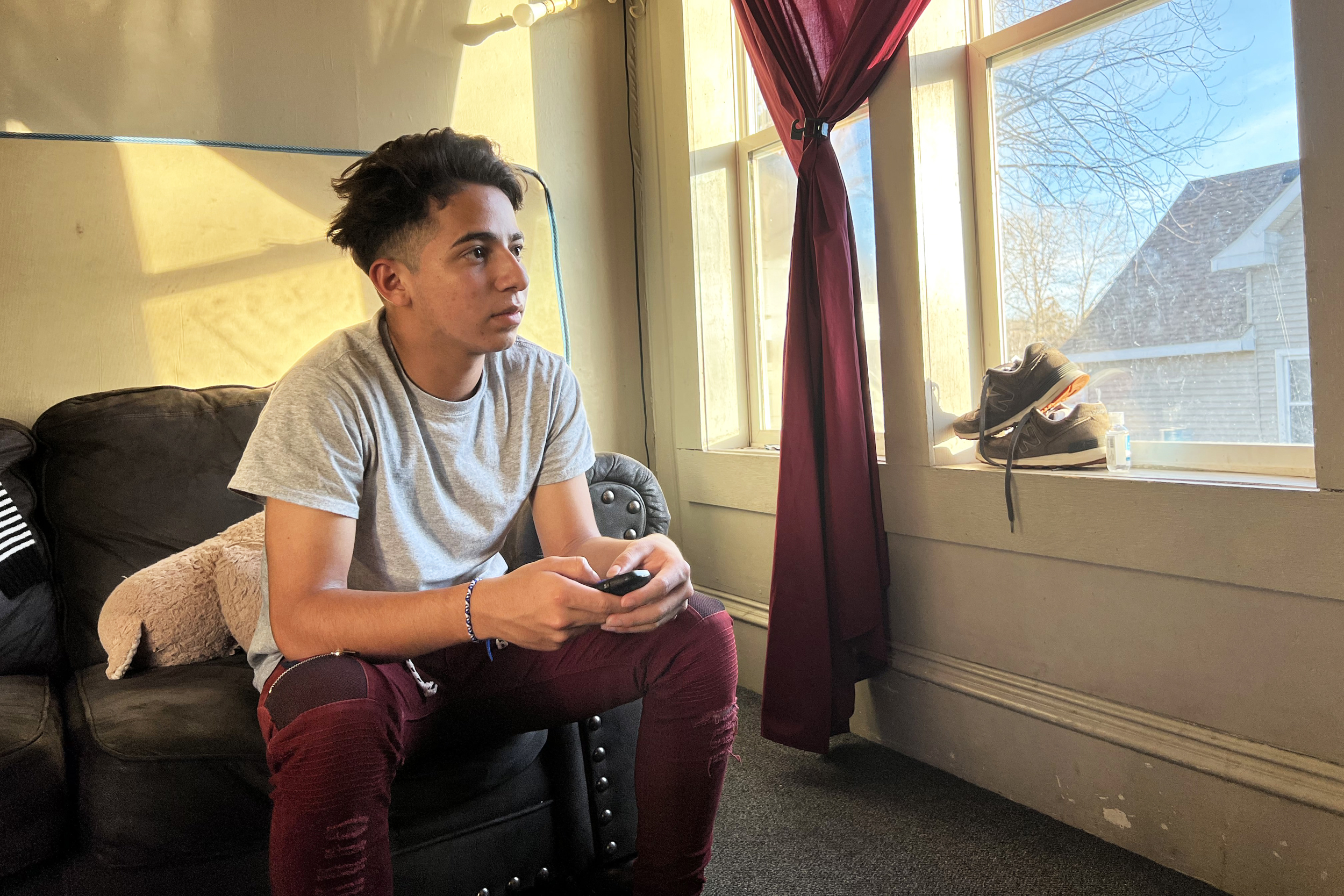 McALLEN, Texas — A teen from Nicaragua said he was “terrified” after being separated from his parents for several weeks after the family said border authorities questioned his birth certificate and whether he was under 18.

“I felt terrified of being alone, in another country, without a mother and without a father. When we came here I didn’t think I was going to go through this,” the 16-year-old told Noticias Telemundo Investiga.

The teen’s name was withheld since he’s afraid the incident may affect his request for asylum.

The teen’s family and attorney said he was separated from his parents at the border and processed as an adult, where he was locked up in two Immigration and Customs Enforcement (ICE) detention centers for several weeks. In one of them, Pine Prairie Processing Center, in Louisiana, the teen said he spent 18 days in a solitary cell, without seeing sunlight and without social interaction.

“I felt like I lost my mom, my dad, siblings, friends, everything. I felt like I was never going to leave the place. I looked at that closed door and entered into a depression, my body was shaking all over and it would not go away,” he said. “I couldn’t even cry anymore. I wanted to die at that moment.”

The teen and his family arrived at the Texas border in mid-September seeking asylum from police repression in Nicaragua.

By law, Border Patrol processes parents and their children together. If there are unaccompanied minors, they must be sent to a shelter system of the Department of Health and Human Services (HHS) and not to prisons contracted by ICE.

“They told me they were going to deport me”

The conflict began at the Border Patrol station in Eagle Pass, Texas, according to the family’s account. One night in mid-September they managed to cross the almost dry river with other Nicaraguans, celebrating their arrival in the United States and surrendering to border authorities at dawn to make a case for asylum.

But when the family gave authorities the teen’s birth certificate, they said the border agents doubted that they were a family. The son burst into tears, according to his own account.

The teenager said that he signed a rudimentary and improvised sheet of paper that the agents gave him, in which they only wrote his name and that he was 18 years old. He claims that he felt intimidated and forced to do so amid screams and threats from two border patrol officers.

Asked for comment by Noticias Telemundo Investiga, Border Patrol did not respond to the teen’s specific case, but said that it collects biometric and biographical information and official documents to determine the age and family relationship of migrants. The agency stated: “When assessing the validity of a family relationship, CBP also relies on articulable observations, such as interactions between the adult and child, to assess whether a family relationship exists.”

“We didn’t see him again”

The teen’s mother, Luz Zelaya, said that agents tore up the son’s birth certificate, a printed document that states that the minor was born in a municipality in eastern Nicaragua in 2005. It was issued by local authorities days before his departure, at the end of August, the family said.

Zelaya said an agent said the document “is of no use,” tore it into pieces and threw it in the trash. “‘You’re lying to me. I’m not stupid,’ he tells me,” said Zelaya, who’s 29 and had her child when she was a young teen. She and her son traveled with her husband of over a decade, who is not the teen’s biological father.

After the incident, “we didn’t see him again,” she said about her son.

The minor’s family said he was detained for a few days by the Border Patrol in Texas, along with about 80 adult men, in a room where “one had to stand, could not even sleep bent over,” the teen said.

They then chained his hands and feet and around the waist, the teenager said, to put him on a plane bound for an ICE detention center for single adults, Adams County Detention Center, in Mississippi.

A spokesman for Customs and Border Protection responded in an email that “migrants in custody who claim or appear to be unaccompanied minors are treated as such until proven otherwise. For example, later it can be determined that they are adults or part of a family unit.”

In the teen’s case, however, he wasn’t prosecuted as a minor but as an adult.

‘Spending 24 hours there was terrible’

After passing through the detention center in Mississippi, the minor was transferred to Pine Prairie Processing Center, in Louisiana, where he said that to his surprise, he was taken directly to a cell in solitary confinement.

He said the cell consisted of a bed, a toilet and a shower that were so close they were almost touching. He spent most hours with his face covered by the blanket so as not to see where he was, he said, and tried to sleep long hours to reduce the time he was conscious and awake.

“There was nothing to do. Spend 24 hours in there, locked up, with the doors locked, without going out. It was terrible. There was no hope of leaving that place,” the teen told Noticias Telemundo Investiga.

Upon arriving at that center, the teen said that he interacted with another alleged minor, 17, also Nicaraguan, who was in a solitary cell for about five days. Noticias Telemundo Investiga has not been able to contact this other young man to verify his age.

An ICE spokesperson told Noticias Telemundo Investiga: “While ICE has found cases of adults who claim to be minors, and minors who were initially processed as adults, instances like these are exceptional.”

The Department of Homeland Security’s inspector general concluded that ICE needs to improve its oversight of solitary confinement and segregation in detention facilities.

Solitary confinement or segregated cells have been the target of human rights organizations for years. The United Nations said in 2020 that its prolonged use in adults is “psychological torture.” By “prolonged” they meant more than two weeks.

The teen said he was in a segregated cell for 18 days and only managed to get out into an empty courtyard to see sunlight in the last four days. His parents, who were also detained by ICE, were released before their son and were able to proceed with the process of applying for asylum.

Once the parents were released, they contacted an attorney and undertook an arduous task to prove their son was a minor. They sent ICE letters from his teacher in Nicaragua, recent high school photos, and his birth certificate. But the boy was still in the Louisiana cell.

“He was unlawfully detained with adults when ICE had proof that he was a minor. It’s been a lack of transparency with ICE throughout this whole process,” said Meredith Soniat du Fossat, a lawyer for American Gateways, an organization that provides assistance to immigrant families.

The attorney said that in her communications with ICE, she was never given a formal explanation for why the teen was in isolation. Ángel said his guard told him through an interpreter that it was because he was a minor.

A spokesperson for ICE, which does not comment on specific cases, said to Noticias Telemundo Investiga in a statement: “An individual claiming to be a minor would be held in an appropriate custodial environment and removed from the general population while verification takes place.” The spokesperson did not address whether a solitary cell is a part of those protective measures.

It was the minor’s national identity document, which the family worked to obtain from Nicaragua, that changed the situation. The teen said the guard told him that they had already verified that yes, he was a minor.

After about a month and a half in an adult detention facility, the teen was transferred within hours into the custody of HHS, which cares for unaccompanied minors, and was sent to a shelter on the Texas border where he would spend about two weeks.

On Nov. 23, more than two months after being separated from his parents, the teenager got on a plane in McAllen, Texas, heading to his family’s new home. On the plane he took a souvenir selfie, his image looking older and more tired than the images he took of his family’s border crossing in September.

At the three airports he went through that day, he looked around strangely. He did not understand the announcements in English that his flight was delayed and the airline escort, who did not speak Spanish, successfully said, “Bathroom?” and he nodded. Carrying a black bag on his right shoulder, he made his way down several empty corridors to his final destination.

“Thank God, everything was resolved”

At that last airport, in Minnesota, his parents were waiting for him.

The three of them embraced, swinging from one side to the other, as if they wanted to verify that what was happening was real.

“Finally!” the parents said, almost in unison. The father closed his eyes for a few seconds and the mother shed a few tears. The father was carrying a folder with documents about his son in case authorities asked for them.

“Thank God, everything was resolved,” said the mother. “We demonstrated that it was all a misunderstanding.”

They got into the old car of a fellow immigrant the parents had recently met who had driven them to the airport. The three of them were crammed into the back, scorched by the car’s heat, which couldn’t be adjusted. They watched in the dark the outline of small rural towns, where migrant labor is a big part of the agricultural and food processing industry.

Little by little, the three of them fell asleep, resting their heads on one another’s shoulders. They looked like an exhausted family.

An earlier version of this story in Spanish was originally published in Noticias Telemundo.

‘It’s a glorified backpack of tubes and turbines’: Dave Eggers on jetpacks and the enigma of solo flight | Dave Eggers

‘The clap for the NHS meant nothing’: novelist turned doctor Roopa Farooki on her frontline experience of Covid | Books

Scents and sensibility: what’s behind the rise of extreme smells? | Fragrance

‘House of Trump is crumbling’: why ex-president’s legal net is tightening | Donald Trump