Here we go with another story of sibling rivalry from Reddit’s “Am I the A**hole?” page…and it’s a doozy!

Read on and see if you think this teenager acted like a jerk when they decided to spend their money on something other than their sister’s party.

We’ll see you in the comments!

“My(17F) sister(15F) has the habit of takings things from my bedroom and keep them or lose them.

My father has talked to her, ground her, make her pay them back but she just doesn’t listen, my mom always takes her side and makes excuses for her. M dad had enough so he bought me a small safe (against my mom’s wishes) and I keep some jewelry, make-up, my diary and gifts from my boyfriend (19M) Caleb.

Cal comes from a upper class family and he’s always buying me stuff, most of it gets stolen by my sister but the most precious gift I have for him is an iPad pro he gave me for my 17th birthday on Feb 14. I love to draw, is my hobby, my form of expression and how I relax.

I used to do it in my laptop, but since Cal gave me the iPad now I can do it in my free time during classes, in the train, the garden, I have more options now. Cal also made a custom case that he paint with a lot of things for me. When I’m out of home I leave it in my safe because is one of the only things I didn’t want to lose. And to be honest I don’t want my sister putting her hands on it.

I spent two days at my brother’s(21M) apartment planning my lil sister’s birthday party, when I came back I went to take the iPad to sketch some ideas but I only found the case. I thought I had leave it somewhere else but I was sure I didn’t, I also never took the case because is my favorite thing, I looked around my whole room, my dad’s office and the garden, since I’m usually there all the time. I also called Cal and asked if I left it in his house but he said no. When my family came back I was awfully crying in the kitchen.

My dad asked what happened and I told her that I couldn’t find my iPad. My mom said very lazily ”your sister lost it in the train yesterday”. I asked what and she said ”Your sister took it to school and lost it. Accidents happen, let it go”. I was actually livid, I said that my sister opened my safe (dunno how) and STOLE my tablet.

My mom told me to shut up and to never call my sister a theft again, my dad got involved and after much fighting he said that my sister had to pay me back, my sister just said that she didn’t had money and attempted to go to her room so I told her that I’ll take the money for her party and just keep it for my iPad, she came right at me and told me that I couldn’t do it, my mom sided with her and demanded the money but I said ”No, she owes me. I get to keep it” and ran to my room.

My father said that I could do it and buy another one, my brother transferred the money a few hours ago and is sitting in Cal’s account (because I don’t have one yet), my sister has been crying because she just lost her sweet sixteen party and says a tablet is worth much less than that.”

This reader made a very good point…

And this person said the sister is at the age where she needs to be taught a lesson.

Another individual said this person is NTA but the mom and the sister are. 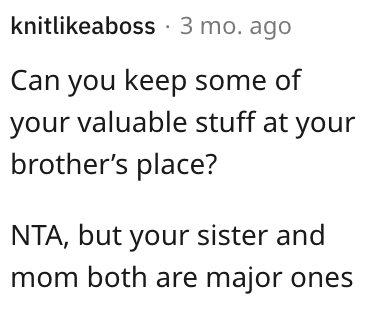