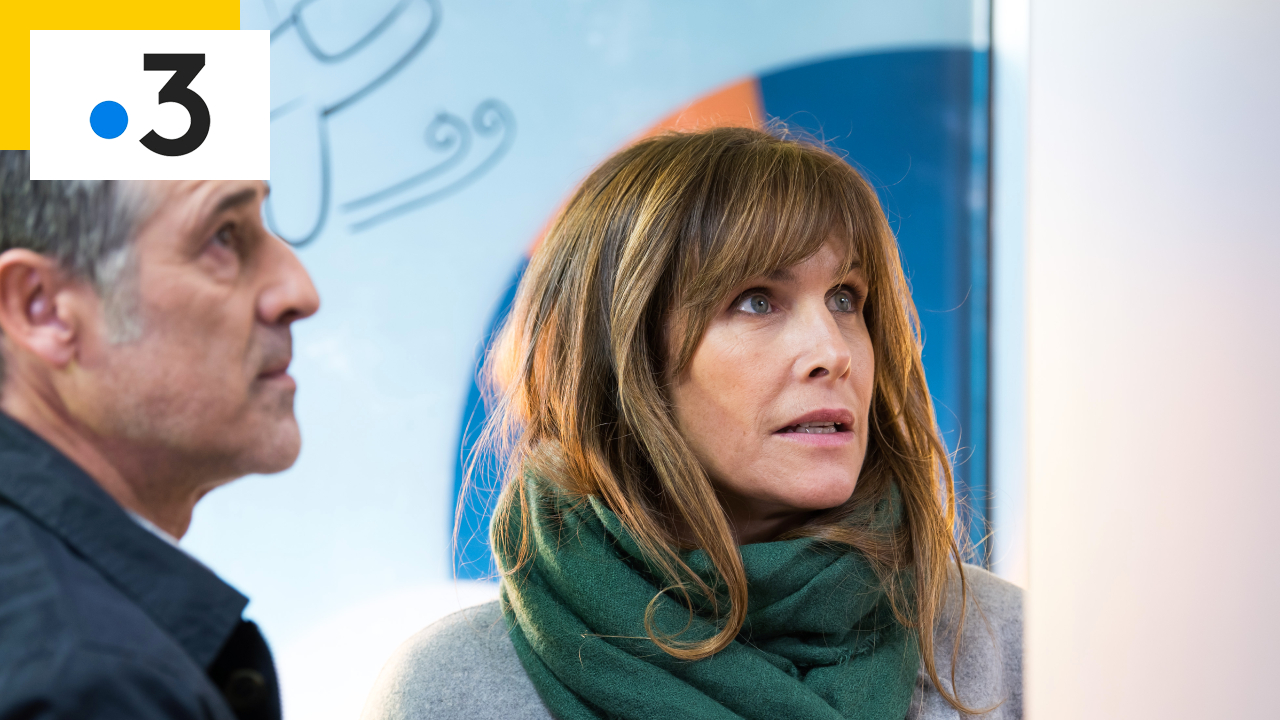 We find Léa and Paul a few weeks after the conclusion of season 5 of Tandem, in which Léa answers “yes” to Paul’s marriage proposal after being struck with amnesia. They have now resumed their daily lives, but Léa remains bitter after Paul’s lack of response… Where is she at the start of the season?

Astrid Veillon : I believe that there are several feelings in her at that moment: this lack of response from Paul, which she does not understand, the guilt of having let go, of having finally confessed her feelings, and in same time the guilt of having done it while Paul is in a relationship with someone else.

Léa is a fundamentally honest person, and this situation makes her uncomfortable and prevents her from going to confront Paul. She’s in complete uncertainty, and doesn’t understand everything that’s going on, and then, little by little, we’re going see Inès’ carousel behind all that. I think Léa is torn between regret, guilt and incomprehension.

Thomas (Titouan Laporte), their son, wants to pass the competition for the gendarmerie school. Her father, her son, her ex… Léa now works as a family!

Léa needs her tribe. His landmarks are them. It is not for nothing that she returned to work in Montpellier. She has her father, her ex-husband, her son, she is very close to her lieutenants… She needs those relationships with people. Inevitably, it will be the perfect opportunity for Inès to take advantage of it.

Léa is someone fundamentally honest, free and who assumes her decisions. She is almost to the point of prioritizing the happiness of others rather than her own. She does not intervene with Paul because she finds excuses for him: he does not have the courage to speak to her, she tells herself that she must leave Inès and him alone… is what Inès is plotting that makes her angry, not her relationship with Paul.

Paul (Stephane Blancafort)meanwhile, continues to see Inès (Baya Rehaz), but he still doesn’t seem to be decided on his feelings. Will he give their relationship a chance? Especially since Inès wants to request a transfer so that they can make a fresh start.

For Inès, it is difficult to accept the situation. Paul and Léa are the only ones not to see that they are still in love with each other. Inevitably, for all the people around, and especially for Inès who falls madly in love with Paul, she knows that the only way to make this couple exist is to move away. With Léa in the middle, it will always be complicated.

I rather think that she does not support that his father is not honest with his mother. That’s what bothers her. She wants him to assume because she’s in the middle of it all, her mother on one side and him on the other. She finds herself witnessing something with values ​​that don’t correspond to her, and that’s why her father’s attitude bothers her deeply.

Which investigations have amused or surprised you the most in these new episodes?

In this season, there are two double episodes, and in particular one which takes place in the gendarmerie which has a thriller aspect quite different from what we are used to seeing in Tandem; because we think that Paul is very involved in the story. It was very interesting to do, especially since we have few means so giving credibility to these stories was complicated; the director, Lionel Chatton, has really done an exemplary job.

Two episodes really marked me: the one with a very strong stake for Léa where her daughter Alice (Sarah Cheyenne Santoni) is directly involved in the investigation, and that or for once, we are not investigating a crime. I’ve been asking for something else to be investigated for a long time: it’s not just dead people, we can also investigate other things! And there, we are on the disappearance of a child, and I found it interesting to be able to deal with something other than a murder, with a real urgency to find the kid who creates a very particular climate.

In an interview with Télé Star last year, you said you were afraid that the series would end up going around in circles in the relationship between Léa and Paul. After shooting season 6, how do you feel?

I didn’t choose to be an actress for job security. I’ve always been a believer in doing what I want and doing it the best I can with all my heart. When you start to get tired, inevitably there is no longer the same desire. And I think it’s disrespectful for our teams and the public.

Now, to know when the moment to stop will be good… I think I know, but it will be done in due time. There we are going to continue with season 7, which we are shooting in June. But I wouldn’t wait to get bored because if I did, I know I wouldn’t be doing a good job anymore. I am also 50 years old, and I aspire to new roles.

I often talk about the magic of Tandem: lPeople love the Paul-Léa duo. And I see it because when I’m promoting my book, I go directly to meet the public of Tandem, and you can feel the public’s affection for this couple. They want to see them together, they don’t want anyone to touch it. Sometimes I feel like we’re their family! (laughs)

Afterwards, there are very beautiful images, we are in a relatively extraordinary setting, and we also live in an era where marriage is rather short-term, and to say to ourselves that if we separate it could go as well as between Paul and Léa, it certainly represents a form of fantasy in the collective unconscious.

They loved each other, they had two children and they manage to work together, to respect each other and to still love each other.

Usually, we are in a relationship of seduction in most series, waiting to know if the characters are going to get together or not. But there, the story is already played. And who better than the person with whom we shared our life for fifteen years, with whom we had two children, to know and understand you? There’s something magical about it, and I think that’s the strength of Tandem, this fantasy of a successful separation.

If the series were to end one day, how would you like to conclude the story of Léa and Paul?

You have to give the public what they want to see. That’s what I told the authors, Paul and Léa absolutely have to get back together! Anyway, that’s how I see it. So there won’t be any surprises, but at least the public will be satisfied. Afterwards, we could make them both die so that they are together until death, we could have an end where we see them getting married and then one of the two would be killed… There could be lots of different endings!

Personally, I would love to see them together again, and for them to tear each other apart again in the final scene, and here we go again! But you have to respect the public until the end, and I think we have to give them what they’ve been waiting for since the start of the series in 2005.

Few people believed in us at the start. o is a true two-deck concept, with budget savings, en addition to that, we didn’t get much support from the press. We rarely get good reviews, they are always very harsh. But we took up the challenge and I think that in each of the positions, we are very proud of what we have done.

Finally, what are your next projects?

I am writing a mini-series with two authors, with a character that I want to play, and I discover how poorly screenwriters are viewed. they are very poorly protected, have very little recognition and their ideas are often taken from them, it’s very hard! So, I’m not going to say anything until we are sure of our project and we have submitted it, and I can defend it tooth and nail because it deserves it.

And then I write the sequel to The bathroom, the piece that I created in 2003 and which had been a big success. My character, Loulou, celebrated her 30th birthday there, and there she will celebrate her 50th birthday. It’s the right time to do it: after the success of La salle de bain, everyone told me to do a sequel, but I had nothing more to say about the discomfort of thirty-somethings, I had done the round and I didn’t see the point of making a sequel just for the sake of making a sequel. Today it makes sense.

JI started writing three months ago, telling myself that next year we will be in 2023, and that it will be exactly twenty years between the two. For me, it was obvious, and I have a lot to say about the transition to fifty! Things with a background and a real reflection on today’s women, the couple after 20 years of marriage, on the liberation of women, on menopause, and on this feeling of liberation. At fifty, everyone tells me that my life is behind me. Great ! We’re finally going to stop bothering me. (laughs)