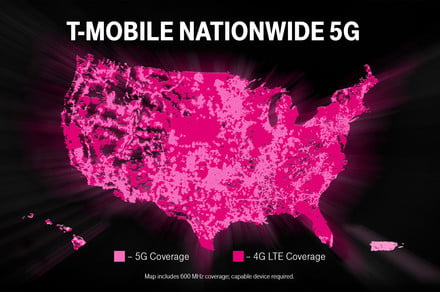 But wait, what is 5G, anyway? The fifth generation of wireless networks, or 5G, has been nearly a decade in the making, and it’s finally becoming a reality. Promising dramatically faster speeds, instantaneous communication, and the ability to network everything, 5G has incredible potential. With 600MHz 5G already nationwide, most T-Mobile customers already have access to some form of 5G — albeit speeds may vary widely depending on where you are.

T-Mobile says it plans to work on its mid- and high-band deployments in earnest in 2021. Here’s everything you need to know about T-Mobile’s 5G network.

T-Mobile doesn’t charge extra to access 5G on its plans — 5G coverage is simply part of what it offers, as long as you have a compatible phone and coverage in your area. That applies to all of its postpaid plans, no matter the price.

T-Mobile Essentials is the company’s cheapest postpaid plan. It starts at $60 per line for one line, though if you add more lines, you can get it for as little as $23 per line. Through Essentials, you’ll get unlimited talk, text, and data — however your speeds may be throttled at times. You’ll also get unlimited 3G hot spot data.

T-Mobile Magenta is the first step up from Essentials. With one line, you’ll pay $70, however, with more lines, you can get that price down to $28 per line. Magenta offers all the same features as Essentials, but it adds a Basic Netflix subscription for those who have two or more lines. You’ll also get 5GB of 5G or 4G LTE hot spot data, after which you’ll be throttled down to 3G speeds. And, you’ll get 100GB of so-called Premium Data, which is unthrottled data. Other features include international data and testing, as well as an hour of Wi-Fi on Gogo Inflight internet.

Last but not least is T-Mobile’s Magenta Max. Magenta Max starts at $85 for one line, however prices can drop down to $36 per line if you add more lines. Magenta Max removes the idea of “Premium Data” altogether, and T-Mobile promises that you won’t get throttled based on how much data you use. Magenta Max also allows you to stream unlimited video in 4K. And, you’ll get the Basic Netflix subscription with one line, and a Standard subscription with two lines or more. Last but not least, you’ll get 40GB of high-speed hot spot data.

T-Mobile has built a significant portion of its 5G network using its 600MHz spectrum, and in fact, T-Mobile was the first to launch a nationwide 5G network using this spectrum. The company has long maintained that at a nationwide scale, high-band (mmWave) 5G isn’t feasible. As part of its merger with Sprint, T-Mobile does have plans to “refarm” (the industry’s word for repurposing) Sprint’s vast midband 2.5GHz holdings for 5G use, and while that has started, it will be a gradual process. The same applies to the company’s high-band multi-GHz mmWave rollout, simply because of the scale and the need for thousands of mini towers across a city.

As a result, T-Mobile customers will find themselves on the low-band Sub-6 5G network more often than not. It’s currently available across the country, including in many rural locations. People in urban areas will increasingly be able to connect to the company’s midband spectrum. According to Ray, peak speeds of 600Mbps are already being delivered to customers in cities like Philadelphia.

Small pockets of cities (think individual blocks) will deliver up to 1Gbps 5G download speeds. Digital Trends has tested Verizon’s mmWave 5G network in Chicago, and the experience should be similar on T-Mobile’s mmWave network.

So what can you expect? In areas covered by T-Mobile’s 600MHz 5G network, you should see download speeds regularly around 200 to 300Mbps, which for many rural areas is a massive improvement over LTE. The difference might be less noticeable in suburban areas where 4G networks were already more robust.

T-Mobile offers a range of phones that connect to its 5G network. In fact, most of the mid-range and high-end phones being released right now offer access to 5G. If you’re on T-Mobile and planning on buying a phone that costs more than $500 or so, it may be worth making sure that it has 5G access if you plan on keeping it for more than a year or two.

Here’s a quick rundown of some of the best 5G-capable phones on T-Mobile.

You can read more about the best 5G phones with our full guide.

Like some other carriers, T-Mobile also offers a home internet plan, which comes at $50 per month, and is billed as being completely no frills. In other words, T-Mobile says you’ll pay one fixed price, without having to pay extra for the equipment to get connected. You also won’t have any data caps.

The service is compatible with both T-Mobile’s 4G and 5G networks, so as the company improves on its 5G network, you might notice your home network improve. And, the equipment that T-Mobile sends you is compatible with Wi-Fi 6, which is the latest and greatest Wi-Fi standard. But it’s notable that T-Mobile isn’t actively marketing or promoting its home internet service — it seems to be targeting a small market right now.

Many industry analysts thought that T-Mobile’s merger with Sprint would primarily be a net benefit for long-suffering Sprint customers. Sprint had a less-than-stellar network to put it mildly, and T-Mobile got to work shortly after the merger to address this problem.

That is welcome news, for sure. But with the merger done, expect T-Mobile to roll out mid- and high-band 5G aggressively. The company commands a massive amount of spectrum, and Ray and others have long maintained that the moment the merger was complete, it would work quickly to merge the networks.

According to multiple statements, the whole process is expected to take about two years and will triple 5G capacity.

“By 2024, the new T-Mobile network will have approximately double the total capacity and triple the total 5G capacity of T-Mobile and Sprint combined, with 5G speeds four to six times what they could achieve on their own,” T-Mobile said in a filing with the Securities and Exchange Commission.

T-Mobile is vowing not to raise prices as a result of the merger, with former T-Mobile CEO John Legere saying that the company would not raise rates for three years. The merger could also result in lower prices.