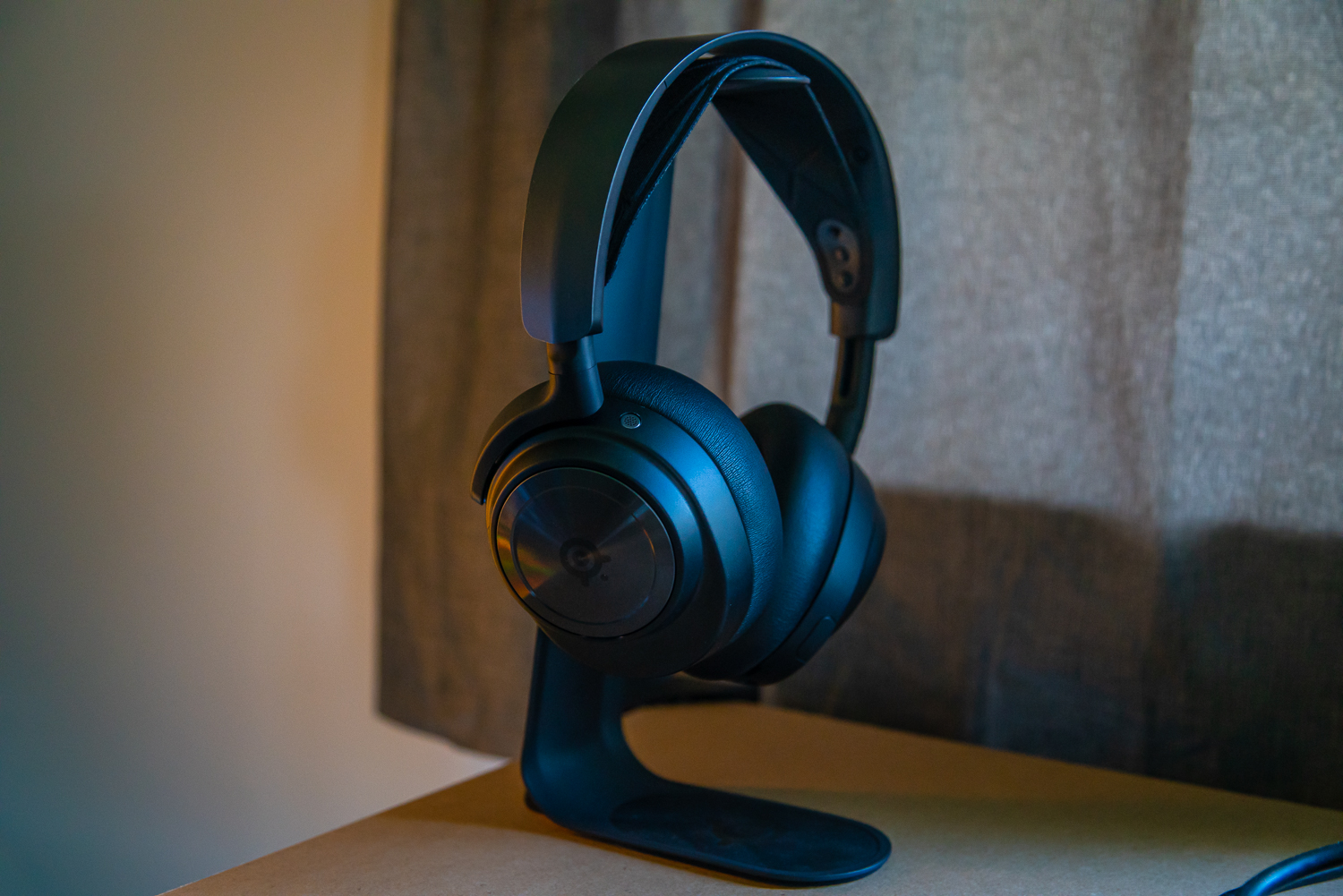 “ANC, top-shelf audio quality, and expansive software are just the start of what the SteelSeries Arctis Nova Pro Wireless has to offer.”

SteelSeries makes the best gaming headset you can buy, so I was shocked when the company told me about a pair that would revolutionize even the top dog: the Arctis Nova Pro Wireless headset. The Arctis Pro Wireless didn’t need an update, but SteelSeries did one anyway. And I’m happy it did.

Design is the biggest thing that separates the Nova Pro from the regular Arctis Pro. Corsair, Razer, and multiple other headset vendors have tried to make a headset that you can use in front of your monitor and while you’re around town. But the Arctis Nova Pro is the first pair to get that balance right.

For starters, you can retract the microphone all the way back into the earcup, transforming them into a normal headset, not a gaming headset masquerading. SteelSeries doesn’t include RGB on the headset, either, instead going with a brushed aluminum finish on the earcups that looks fantastic. Replace the SteelSeries logo with a Bose or Sony logo, and you could convince me the Arctis Nova Pros came from one of those brands.

The Arctis Nova Pro is built like a premium headset, too. The plastic construction doesn’t even hint at flimsiness, and the entire shell is supported by a chunky aluminum headband. That makes the Arctis Nova Pro a bit heavier than other gaming headsets, but thankfully that doesn’t get in the way of comfort.

I have one minor issue with the design: the placement of the USB-C port. SteelSeries clearly intends for you to use the hot-swappable battery instead of charging with a wire, but that ignores when you’re using the headset apart from your PC. The USB-C is under a magnetic plate on the left earcup, forcing the cable to stick straight out for wired charging. This is definitely an Apple Magic Mouse-type charging situation.

In most cases, though, you’ll just be swapping the battery out. SteelSeries includes two, one of which charges in the GameDAC constantly. Battery life isn’t very long, much lower than the HyperX Cloud Alpha Wireless, but you’ll rarely have a dead headset with two batteries at your disposal.

The headset is only half of the package: you also get the redesigned GameDAC. I like the larger base, and getting around the GameDAC is just as easy with a large volume wheel and a single back button. The big change is that the GameDAC comes with two USB outputs now, allowing you to swap between a console and PC or two consoles with a single press.

Even better, the two inputs can still run to the 3.5mm output on the GameDAC. For the wireless version, that means I was able to switch between the headset and my AudioEngine A2+ speakers automatically, as well as bounce between my PS5 and PC without touching a single cable. I’m shocked we haven’t seen a design like this before because it’s damn useful.

I could use the Arctis Nova Pro as an everyday headset, and a lot of that comes down to the comfort. The leatherette earcups are extremely soft and plump, and the clamping force isn’t nearly as strong as the Arctis Wireless Pro. SteelSeries really honed in on making its flagship headset as comfortable as possible, and it shows.

As usual, the suspended headband does a lot of the heavy lifting. SteelSeries took a different approach this time around with adjustable points for the headband. When combined with independent height adjustment for each of the earcups, the Arctis Nova Pros is the most flexible headset SteelSeries has to offer.

I’d take some time to adjust them, though. I eventually arrived on a comfortable fit, but the drivers press against the fabric inside the earcups, which irritated the top of my ears when I first started using the headset.

I’ve used half a dozen SteelSeries headsets, and they always sound incredible in games. The Arctis Nova Pro isn’t any different. From Destiny 2 to Elden Ring to Lego Star Wars: The Skywalker Saga, the headset was dynamic and lively across the frequency spectrum. Part of it is the GameDAC, but SteelSeries headsets are tuned perfectly themselves — everything sounds natural.

The virtual surround sound works well in games, but as I’ll get to in a moment, it feels more at home in movies. The big plus for gaming is the active noise cancellation and dual inputs. ANC works shockingly well. It’s not on the level of Sony or Bose, but it’s close.

For dual connections, 2.4GHz and Bluetooth is a treat. Like the previous Arctis Wireless Pro, you can have both connections active at the same time, which is particularly useful for a console if you want to access Discord or Spotify without an AirPod sticking out of one ear.

I was shocked at how well movies and music held up on the Arctis Nova Pro. SteelSeries clearly had them in mind when tuning the headset. For music, I listened through Smino’s blkswn, Spiritbox’s Eternal Blue, and Tigran Hamasyan’s The Call Within to cast as wide of a net as possible, and they all sounded fantastic.

The Arctis Nova Pro has a presence in the mids, which is hard to find in gaming headsets. Take the Corsair Virtuoso Wireless XT, which similarly target a gaming/lifestyle balance like this SteelSeries headset. The tone response has several cuts in the midrange to increase clarity in games, which makes the midrange warmth necessary for music to feel like it’s lost.

Not the Arctis Nova Pro. I wouldn’t have any issues taking them in place of my Sony WH-1000XM4s on a trip. Music is one part, but the Arctis Novas handle movies well, too. The surround sound and parametric EQ really get a chance to shine in movies. For the first time ever with a gaming headset, I’m comfortable saying the Arctis Nova Pros provide a theater-like experience with bombastic sub-bass, excellent positioning, and wide dynamic range.

My only quibble is the microphone. The quality is fine, but it’s prone to pick up noise. That’s especially apparent with a noise gate turned on, where the mic seems to pick up peripheral sound at random. Thankfully, the noise suppression in apps like Discord handles the noise a bit better.

I’ve never been a huge fan of SteelSeries GG — read my SteelSeries Prime Wireless Mini review for more on that — but Sonar breaths new life into this application. It unlocks a new level of customization in the world of gaming headsets, mainly on the back of its 10-band parametric EQ.

EQ isn’t anything new, but parametric EQs are a new frontier. You can drag the bands to any frequency you want and adjust the Q (slope of the EQ curve) to hone in on the area you want to adjust. Sonar has several filters for each band (high pass, low shelf, etc.) for further sculpting options. You just don’t get this level of customization with most headsets, let alone gaming headsets.

The EQ presets are excellent, too. SteelSeries has several profiles for popular games that adjust the curve to target different elements — footsteps, gunshots, and the like. Sonar even has visual guides for popular games like Rainbow Six Siege and Fortnite that show you the frequency areas where critical sound effects live (like the revive sound in Call of Duty: Warzone).

It’s a level of freedom most gaming headsets don’t come with, and consequently, most gamers are accustomed to. Sonar gives you near endless options to shape the sound, but that results in some nasty interactions with the surround sound. The good news is that you can save your own presets in Sonar so you can find something you like and stick with it.

Outside of the EQ, Sonar includes a mixer that gives you control over levels and routing. You can route game and chat audio to different devices, and you can adjust the balance between them or the volumes independently. Even better, you have access to the same options for chat audio as you do with your own microphone (useful for adding a noise gate to that friend who loves making too much background noise).

I wish that SteelSeries took Sonar into account with the GameDAC, though. As it stands now, you can’t access the mixer you see in Sonar. You can adjust the EQ and volume levels, but the original GameDAC allowed you to adjust the balance on the home screen, and I would’ve liked to see that level of integration with the hardware here.

Although it has a few minor issues, it’s hard to ignore the immense package the Arctis Nova Pro Wireless is. ANC, top-notch sound quality, and all-day comfort are just the start of what the headset has to offer, easily making it the best gaming headset you can buy in 2022.

Yes. The SteelSeries Arctis Nova Pro Wireless is a new standard for gaming headsets, and it’s the go-to option in the premium gaming headset space.