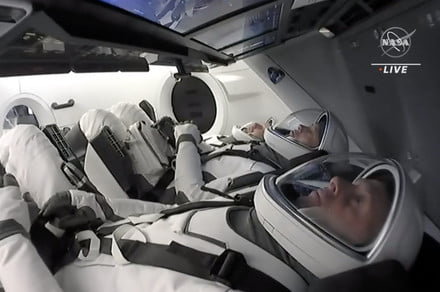 A SpaceX Falcon 9 rocket carrying the Crew-2 astronauts inside the Crew Dragon spacecraft blasted off from Launch Complex 39A at NASA’s Kennedy Space Center in Florida at 5:49 a.m. ET on Friday, April 23. You can watch the lift-off in the video below.

Liftoff of Falcon 9 and Dragon! pic.twitter.com/g6Oi8qwU2Y

The crew — NASA astronauts Shane Kimbrough and Megan McArthur, plus Japan Aerospace Exploration Agency astronaut Akihiko Hoshide, and European Space Agency astronaut Thomas Pesquet — are scheduled to dock with the ISS at 5:10 a.m. on Saturday, April 24. The entire event, including the astronauts’ entry into the space station, will be streamed live on NASA TV, which we’ve embedded at the top of this page.

The Crew-2 mission marks only the second operational flight of SpaceX’s Crew Dragon capsule, and the third astronaut flight overall.

The capsule’s first-ever crewed flight took place in May 2020 with NASA astronauts Doug Hurley and Bob Behnken in the Demo-2 mission. The successful test flight paved the way for the first operational mission (Crew-1), which got underway in November 2020 with NASA’s Mike Hopkins, Victor Glover, and Shannon Walker, together with JAXA’s Soichi Noguchi. That crew will be returning to Earth in another Crew Dragon capsule next week, while the Crew-2 astronauts will spend the next six months aboard the orbiting outpost as part of the station’s Expedition 65.

Today’s launch was due to take place 24 hours earlier on Thursday, but adverse weather prompted SpaceX and NASA to hold off until better conditions prevailed.

Want to find out more about the Crew-2 astronauts currently hurtling toward the space station? Then check out this NASA video featuring each crew member answering a bunch of rapid-fire questions.

Voyager 1 Spacecraft Picks up the Hum of Interstellar Gas