Should We Always Apologize After Harsh Words Are Exchanged?

Most of us pride ourselves on keeping our cool a majority of the time. We want to keep a level head, and to not upset the people in our lives without seriously considering what it is we want to communicate first.

That said, we all lose it occasionally. That’s just a part of being human.

And as OP found out for a second time, her feelings about marriage and parenthood are real triggers for her hot head.

OP is getting married soon and she and her fiancee are approaching the day with level heads due to his childhood trauma.

I 26f am getting married in a couple months.

My fiancé and I have been preparing for our wedding a little untraditionally and it’s caused problems between my cousin 25f and I.

My fiancé grew up with divorced parents and always he was completely against marriage until he met me. He never wanted to put any kids through what he went through. It was a very nasty divorce that involved his dad embezzling millions of dollars and left his mom homeless with no money. Because of this we agreed we would get a prenup and we have also been doing premarital counseling.

The prenup is very fair to both parties, it’s simple but protects each us from any debt that the other obtains and includes clauses that protect me in the event of divorce.

She was sharing her plans with her family – including a cousin with whom she had a falling out several years prior.

The cousin made some questionable decisions about getting married and having children young. Her family was against it and at the time, OP did not hide her own negative feelings about the event.

They haven’t been close since, and the cousin took this opportunity to reveal her own feelings about her cousin’s choices regarding marriage.

I was having lunch with my mom, my aunt, and my cousin the other day and I told them all of this. For background, my cousin and I were very close growing up until she had a planned pregnancy young and got married the day she turned 18.

When she told me she had planned the pregnancy I told her she was selfish and irresponsible and she was setting her kid up for failure because she wanted to be a wife and a mom before she was financially or emotionally ready. We got in a huge fight and our relationship was never the same after.

She is now divorced with 3 kids at 25 and had to move back in with her parents.

After I told her them all the details about the prenup and the counseling she said “that doesn’t sound very romantic to me” and said that if my fiancé wants a prenup he probably thinks that I’m marrying him for his money.

OP was upset about the feedback and the two ended up rehashing the past and opening up old wounds.

She’s wondering if she should have just let sleeping dogs lie.

This struck a nerve with me, my fiancé started a successful business right out of high school and was making money in the higher 6 figures while he was still in college. I told her that if my not be the most romantic but neither is getting a divorce and the fact that he made sure our prenup protects me as well makes me even more in love with him because if we do get a divorce I won’t be stuck with his kids and no money.

This started a long screaming match that ended when my cousin asked why it made me happy to see her struggle. I said it didn’t make me happy but I did think it was her own fault. That was the final straw and she stormed out of the house and drove off. We haven’t spoken since.

I know that I said some harsh things but I never would have said them if she hadn’t made comments about me and my upcoming marriage first.

OP also added this clarification later, in case any of it is interesting or relevant for you.

The stuff I said to my cousin when she first got pregnant was harsh and I know that. Our whole family was upset with her and she came to me thinking I would tell her what she wanted to hear.

I printed out statistics of what happens to teen moms and their kids and told her she was selfish for putting what she wanted over what’s best for her future kids. She was 18 and still in high school and her ex husband was always a trouble maker.

I didn’t think she had considered any of the harsh realities of motherhood.

It seemed like everyone but her could see what a terrible decision it was and I thought if she really listened to me she would be open to either adoption or abortion.

Reddit is going to let her know whether or not her harsh words went too far, so let’s see what they have to say!

The top comment says that sometimes people need to hear a harsh truth from someone who loves them. 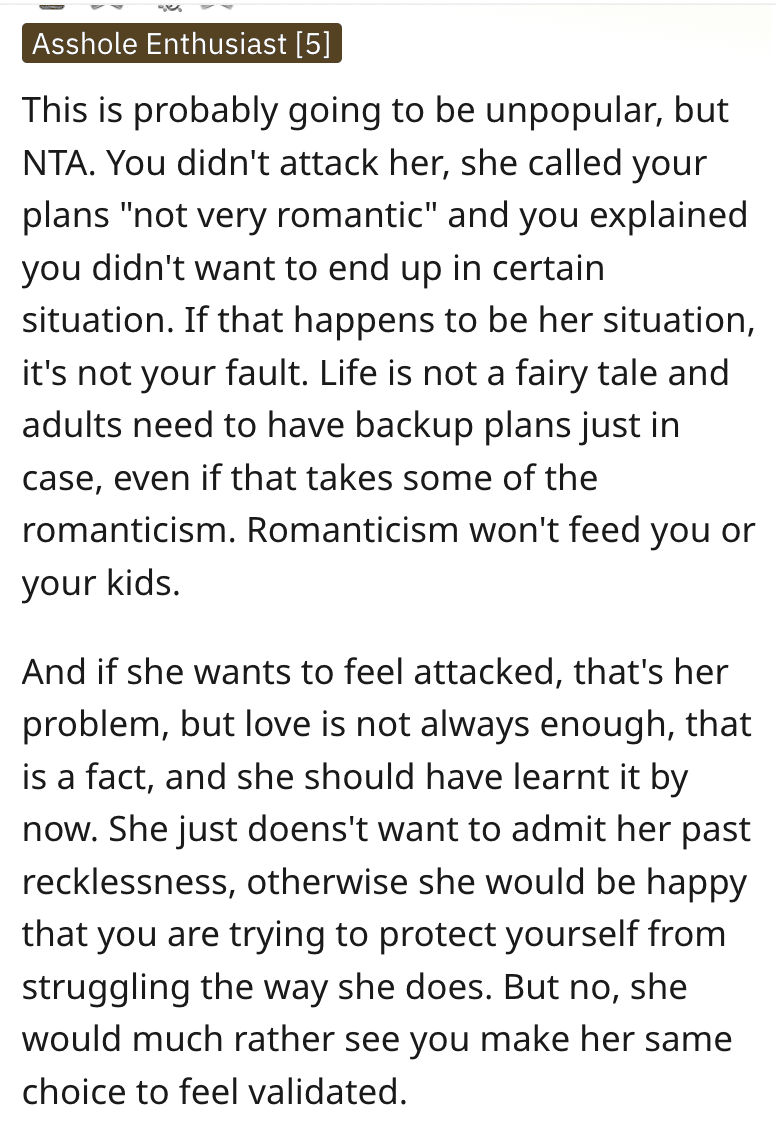 Romance is all in the eye of the beholder. 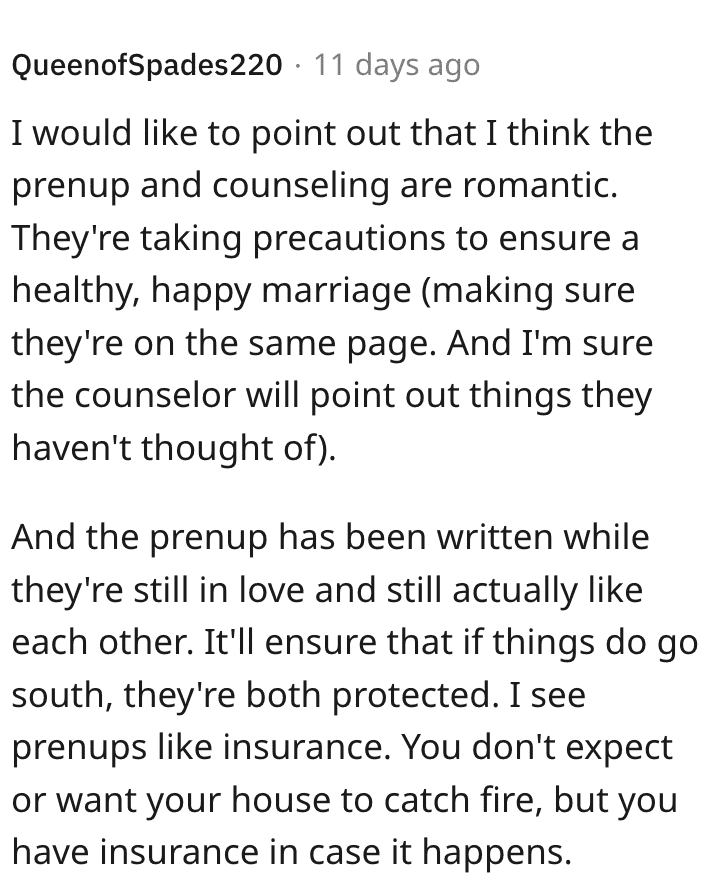 But not everything about adult relationships has to be romantic anyway. 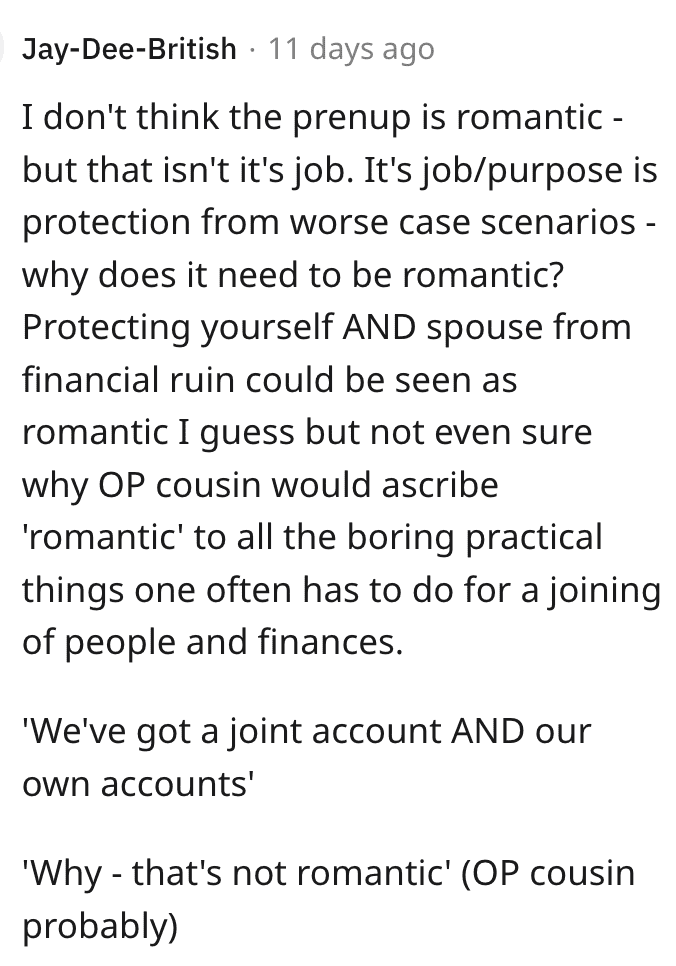 Some people just enjoy being practical. 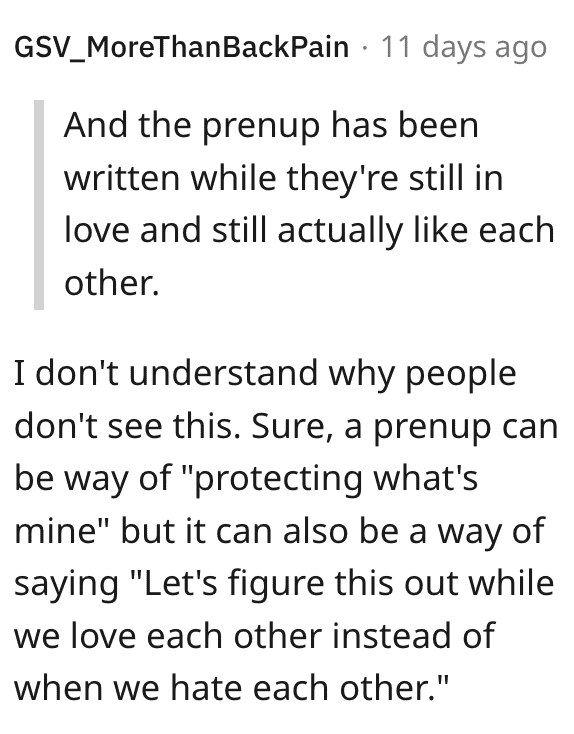 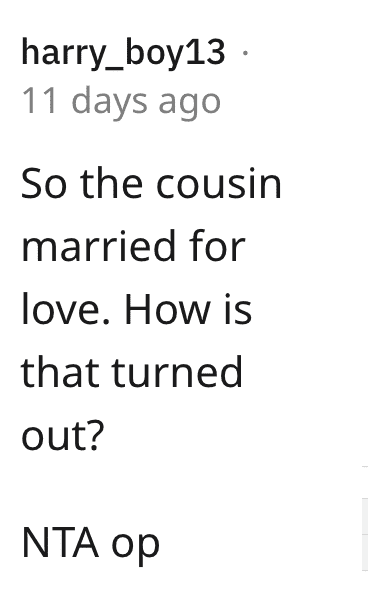 I’m not advocating for being rude and judgmental about other people’s choices, but I can see why OP lost her cool.

How do you feel about prenups and counseling? Tell us yea or nay in the comments!