Should This Woman Give In To Her Parents’ Request That She Embrace Her Sister’s Relationship With Her Ex?

Having a life-threatening, debilitating illness like cancer changes people’s lives. Not only that, it always impacts the lives of their loved ones, as well.

This woman has had a stepsister since she was a toddler, and when the stepsister got cancer in her teens the entire family – including OP – turned their lives upside-down to help her get through it.

My (25F) father married my step-sister’s (23F) mother when I was 4 and she was 3. We’ve lived together most of our lives and are a family. She and I were extremely close.

She developed cancer when she was 14 and was sick for about 2 years. She’s since made a full recovery. During that time, my parents became understandably over-protective. They also asked a lot of me. I quit my extracurriculars so I could get a job (the money went towards her medical bills) and so I could drive her to appointments. I didn’t go to dances and any fun activities I did needed to include her.

I did almost all of this willingly, the exception being having to quit my high school volleyball team – I did throw a bit of a tantrum about that, but was swiftly punished. And I think having one emotional breakdown was pretty chill given the circumstances.

Anyhow, I go to college and meet my ex, we’ll call him Ben, when I’m a junior. We fall in love, blah blah blah. He and I move in together when we graduate, so we’ve been living together for about 3 years.

We were serious until July when I walked into my bedroom and saw him f**king my sister.

Instead of apologizing, the stepsister came back with the information that not only were the two of them sleeping together, they’re in love and in a serious relationship of their own.

I broke it off, tears were shed, he moved out, etc. My sister apologized at first but then backed off. I thought she was giving me space but last week she called and asked if we could meet up.

She told me that she and Ben were in love and were just telling me as a courtesy before they started posting photos online.

Distraught, I left her in the restaurant by herself and did not pay my portion of the bill. She later venmo’ed me asking for the money.

OP was understandably not ready to accept this reality. Her parents, however, are calling her selfish for not wanting her stepsister to be happy, no matter who it’s with.

She told my parents who then called me to their house, telling me how disappointed in me they are for not supporting my sister’s relationship with Ben.

They brought up the fact that because she had cancer as a teenager, she never learned proper social etiquette, and has a hard time meeting people. I don’t buy this, in part because I’ve seen her socialize just fine and since we spent a good chunk of the time she was sick together, that would also mean that I should have bad social skills as well, by that logic.

They then told me that if I don’t accept my sister and Ben’s relationship, they may have to go no contact with me. I reminded them that I’m also their daughter and they should understand my point of view, but they are adamant that this is about me being jealous of her.

Later, OP learned that her sister is pregnant and their parents are excited to be grandparents, and they feel OP is “ruining” the experience.

Turns out my sister is not only in a relationship with Ben but FOUR MONTHS PREGNANT. Which means she and Ben were f**king for longer than I had even guessed.

Apparently my parents are so adamant that I forgive her because I’m already ruining their experience of their first grandchild.

That’s right, I’m less important than my stepmom posting ultrasounds to Facebook. This is where we’re at.

OP isn’t jealous, it’s just a matter of not wanting to be nice to someone who betrayed you badly.

It’s also about a stepsister who is repaying her with this crap when she was nothing but kind during the hardest time in her life.

For the record: I’m not jealous of her. I’m not upset that Ben picked her over me. I’m sad about the end of the relationship and do feel betrayed, but lord knows that I don’t want to be with a cheater.

What I’m upset about is the fact that my sister chose Ben over me. That she slept with Ben knowing he and I were in a long-term, committed relationship, and continues to be with him knowing how much it hurts me.

Now no one in my immediate family is talking to me and I’m getting messages from aunts and uncles and cousins telling me that I’m an a$$hole and a selfish b*%ch.

Reddit’s about to jump on this one, and I have a feeling they’re going to have a lot of thoughts.

The top comment says that not only is OP not wrong here, but she needs to take a step back and re-evaluate how her family has treated her over the years. 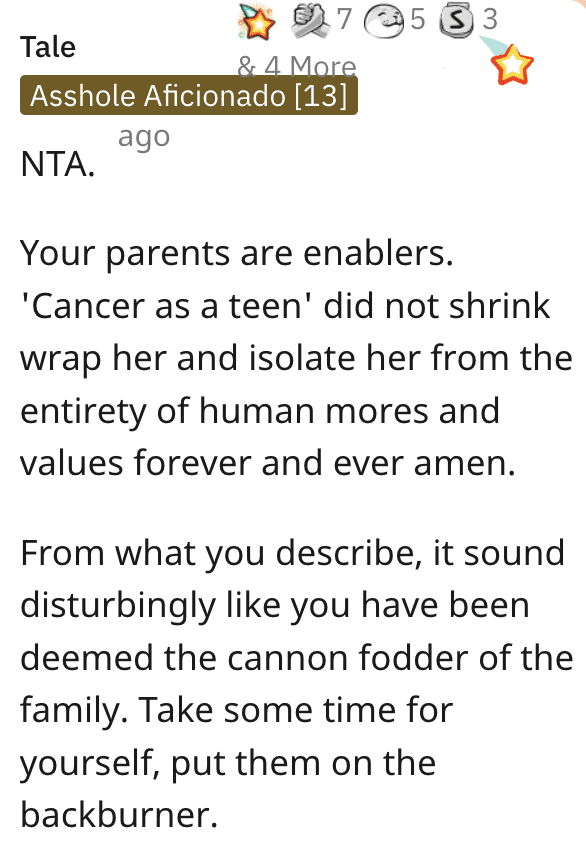 Boundaries are not only healthy, but necessary. 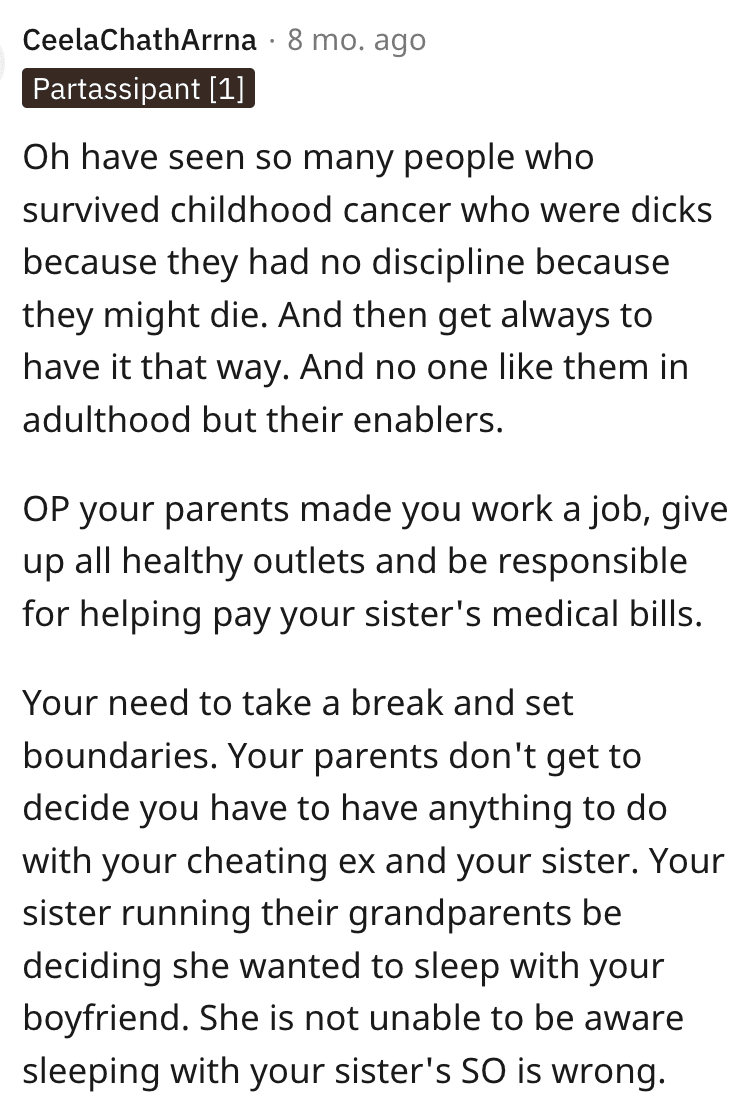 No one seems to be considering OP’s feelings, and they haven’t for quite some time. 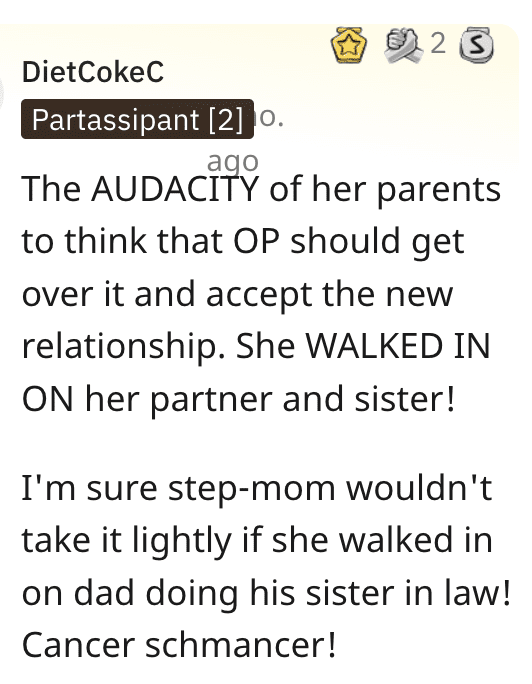 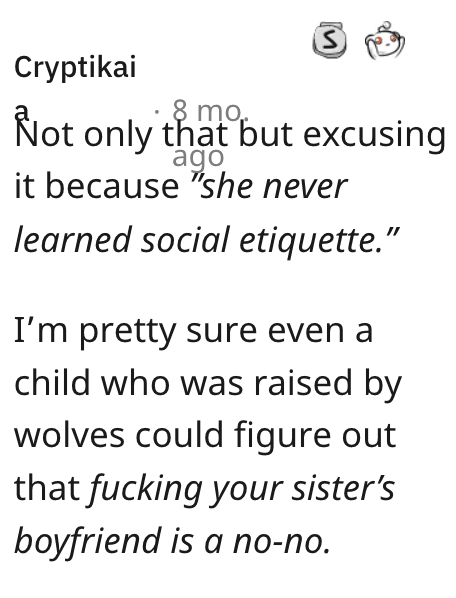 It’s sad that their parents think this is an either/or scenario. 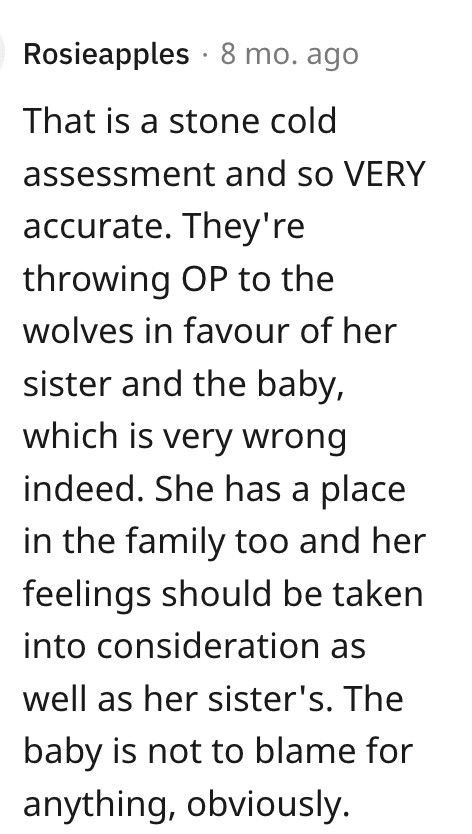 Y’all I just feel so badly for OP. She’s really going through it and no one is on her side – I hope she has a good group of friends.

How would you have handled this situation? Let us know in the comments!