If there’s one thing that hanging out on Reddit has taught me it’s that there are way too many women out there taking care of their husbands while also working and caring for actual children as well.

It seems as if OP in this case falls into that category, as her husband has “sleep issues,” that lead to him sleeping in every workday while she watches his work email for him to make sure he doesn’t miss anything important.

While she also works from home and looks after their toddler.

My husband routinely has issues with his sleep schedule. We both work from home.

On mornings when he needs an extra hour or two, he asks me to grab his laptop, log on, and monitor his email/Skype until he wakes up. Mind you, I do this while doing my own work (I manage to wake up and get online even if I only get 5 hours of sleep) and caring for our toddler.

Recently she got up and went about her normal routine, waking her husband at 9 when he asked to be woken.

He didn’t get to his computer until 10:30, though, when he learned that he was supposed to be in for a meeting at 9.

One morning, I grabbed his computer for him but he asked to be woken by 9am. I was logging on after a week of vacation and had a couple of high priority items to tend to. I forgot to check his email.

He woke at 9am but never came to get his computer until 10:30. It turns out, he had a 9am meeting that he completely missed.

OP was accused of “making” him miss his meeting and for not being a “team player” when it comes to making money that the family needs.

He started yelling at me and cussing me out for not checking his email. I told him it’s not my responsibility to do his job, and he said it’s OUR job because our livelihood depends on both our jobs. He said I am not a team player.

Does Reddit think this was her fault/responsibility? I’m going to guess not, but let’s hear it straight from them…

The top comment points out that it makes no sense for him to blame her for his mistake. Totally uncool. 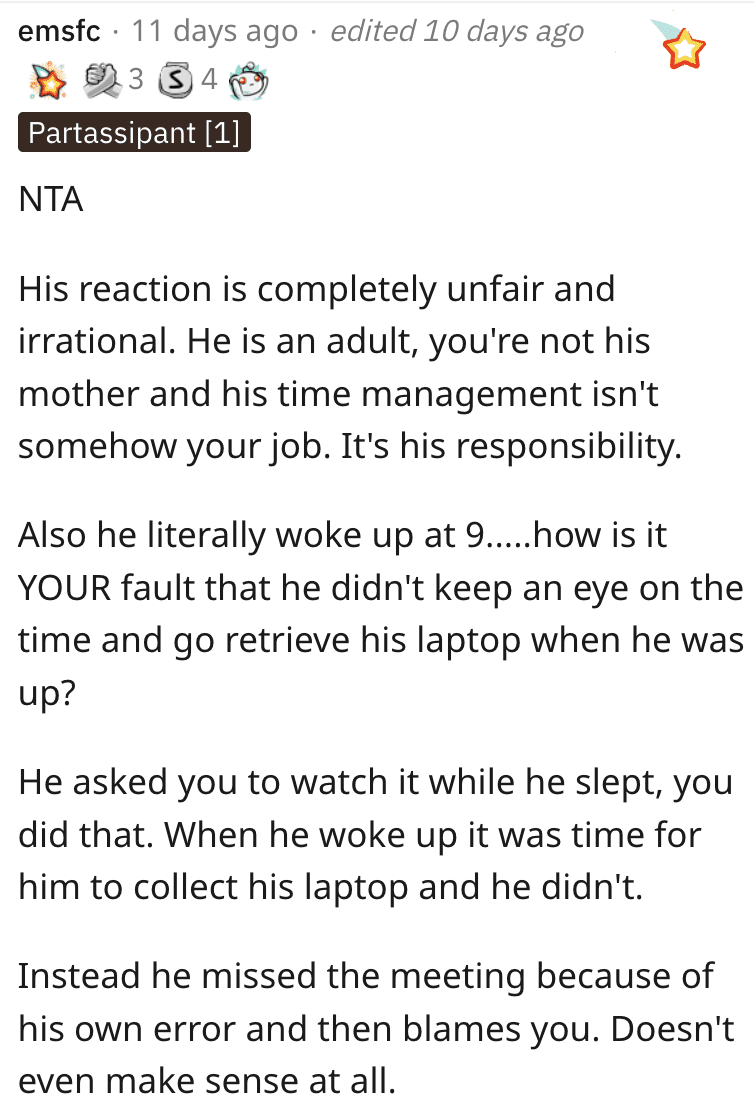 It’s definitely time OP stop coddling him and let him handle the fallout from his own “issues.” 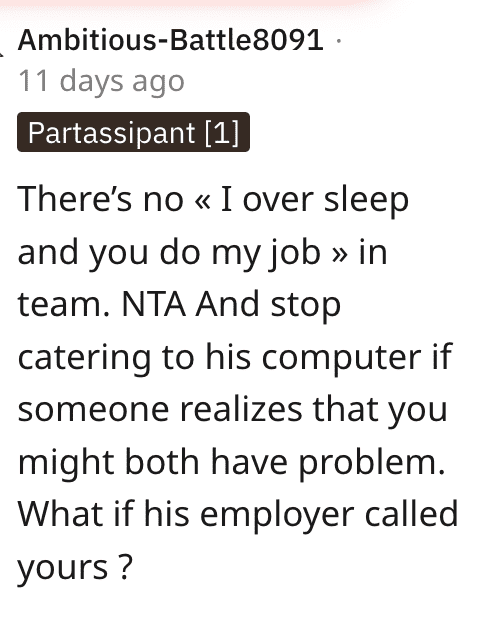 If anyone seems to not be playing as a team, it’s him. 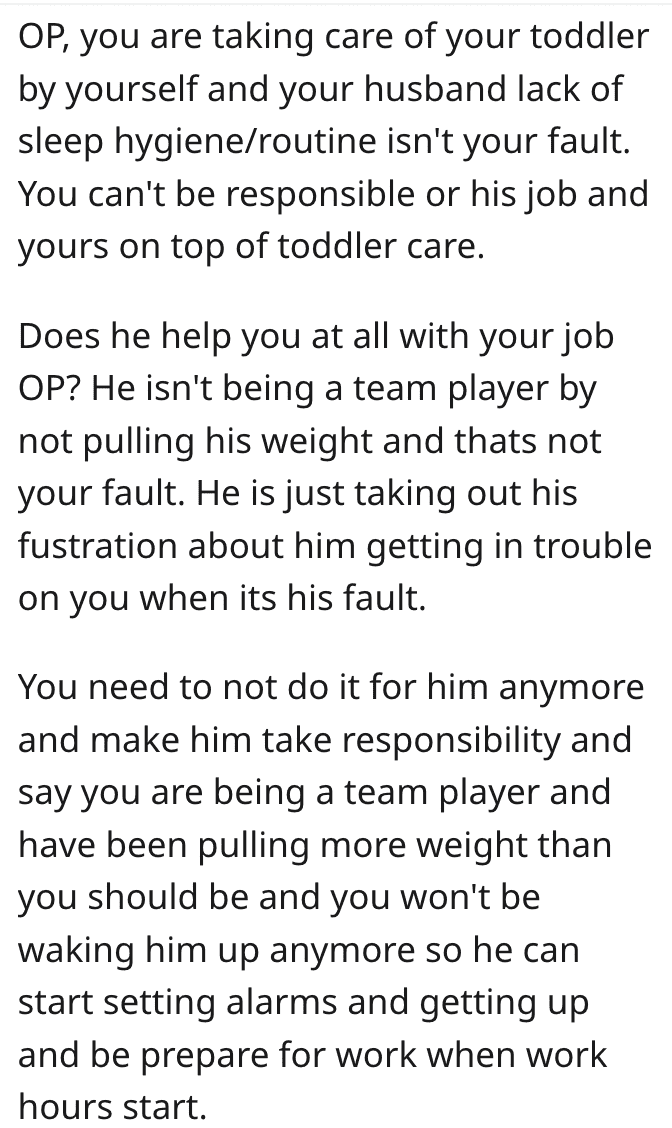 It’s high time he start living as a functional adult like the rest of us (like it or not). 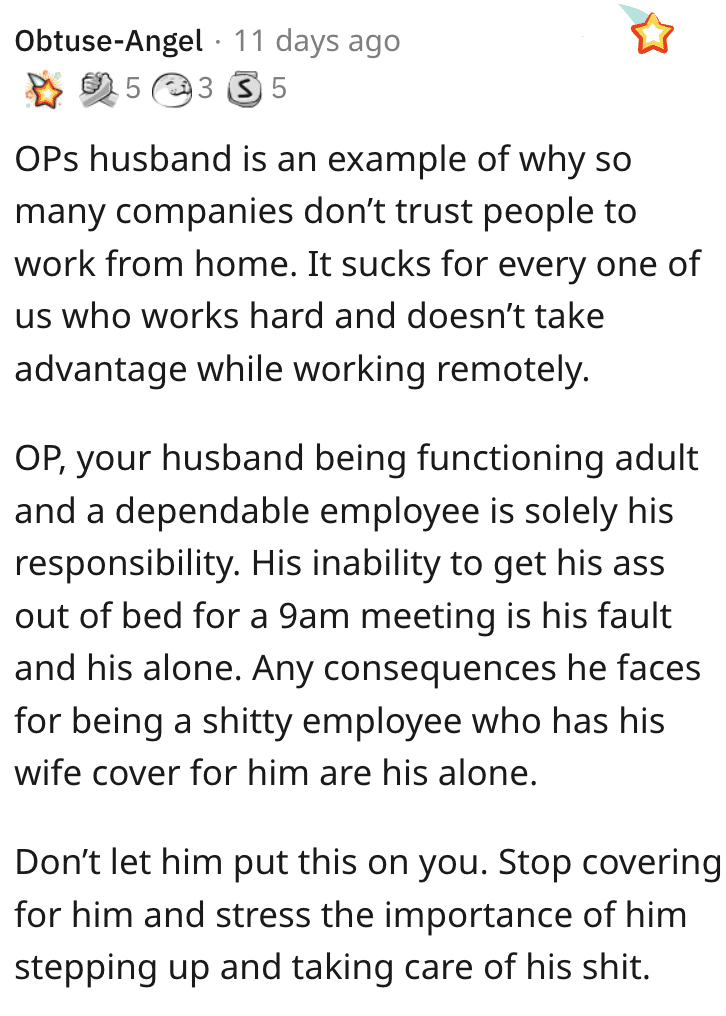 This person is a bit harsher in their assessment (but still not wrong). 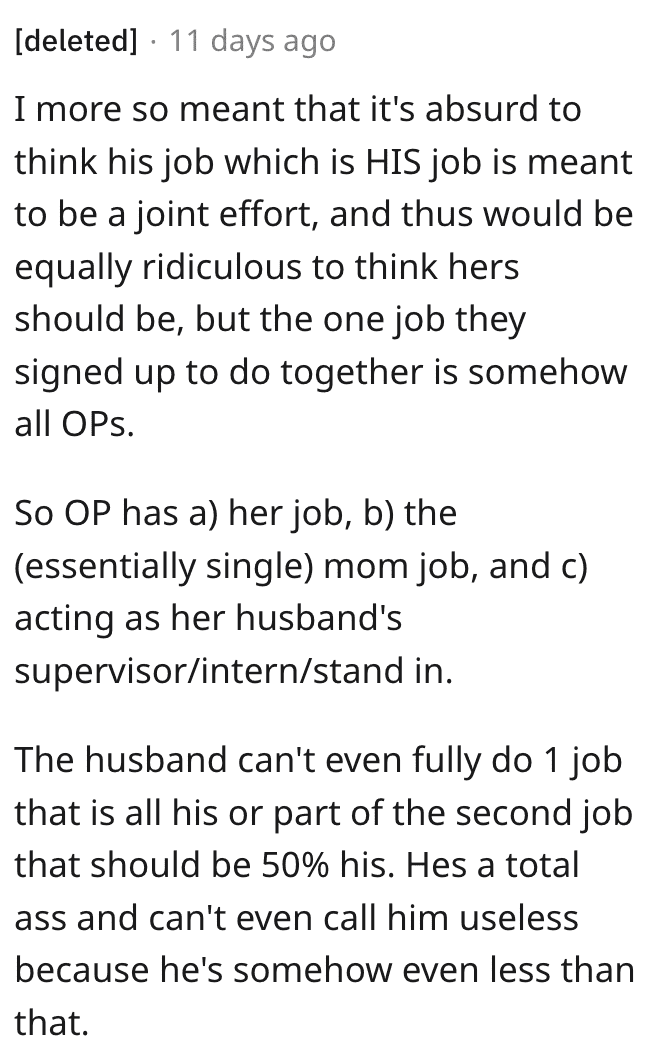 This entire post makes me so angry. Stop enabling these people!

What would you say to your spouse if this went down in your house? Sound off in the comments!