Should This Woman Feel Badly For Making Her Boyfriend Uncomfortable On Purpose?

There’s no doubt that relationships are hard, but if you read enough posts on Reddit’s Am I The A$$hole thread, you’ll also realize how many women don’t actually realize when they’re in relationships with terrible men.

There’s a learning curve when it comes to dating, apparently, and way too many of us spent way too much time with people who just aren’t worthy before we figure it out.

Luckily, there’s Reddit, and after hearing the feedback on her post, this woman is ready to take their advice.

Her boyfriend insists on hanging out when she has her friends over for girls’ nights, making everyone uncomfortable in the process.

So, she and her friends hatched a plan to turn the tables, hopefully convincing him once and for all that he wanted to leave them to their own devices.

My boyfriend m/27 started asking to join me in my girls night in. Everytime I tried to say no he be like “I have to join or you’ll have to cancel”. It made me & the girls miserable having to sit there with him in the middle.

This past friday he insisted to join us again, I had enough I came up with an idea to get him to hate hanging out with us, made a plan and told the girls what we were going to do and they were down for ot.

Her tactics were basically to talk about “girl stuff” that her boyfriend finds gross and distasteful (mostly period related) and after turning red and sweating for awhile, he made an excuse and a quick escape.

The girls came and my boyfriend immediately sat with us and started ruining our conversations by steering them towards him/his work/his achievement. So here’s what I did, I started bringing up gross/ embarrassing subjects and the girls were eating them up by talking about them in details.

We talked about this stuff in boring details, like…I could feel his discomfert without even looking at him. But God when I turned to see why he got quiet suddenly. he was getting red in the face, and had sweat all over his forehead, I bet he found himself unable to relate to thise subject thus couldn’t take part in the conversation.

He got up from the couch ready to head out, I looked at him and asked where he was going and he was like “I just ah…I just remembered that I have an important meeting with a guy in about 10 minutes and….ah…I have to go now” he rushed out telling us to have fun. The girls and I started laughing hysterically.

Now he’s angry with her for running him off, claiming she did it on purpose, and is barely speaking to her to boot.

he came home and berated me saying I made him feel uncomfortable/sick with the horrible subjects I kept bringing. I said “what u talking about? This is the typical stuff girls talk about all the time” but he insisted I made him upset and caused him to leave. He declined to speak to me and been quiet since then.

You know Reddit’s got great advice coming, so let’s dive in! 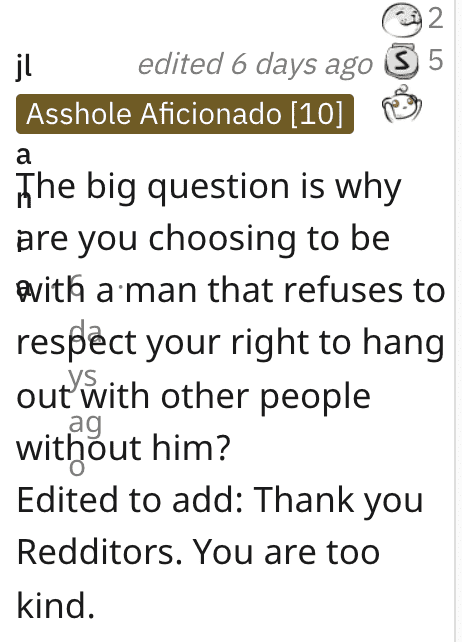 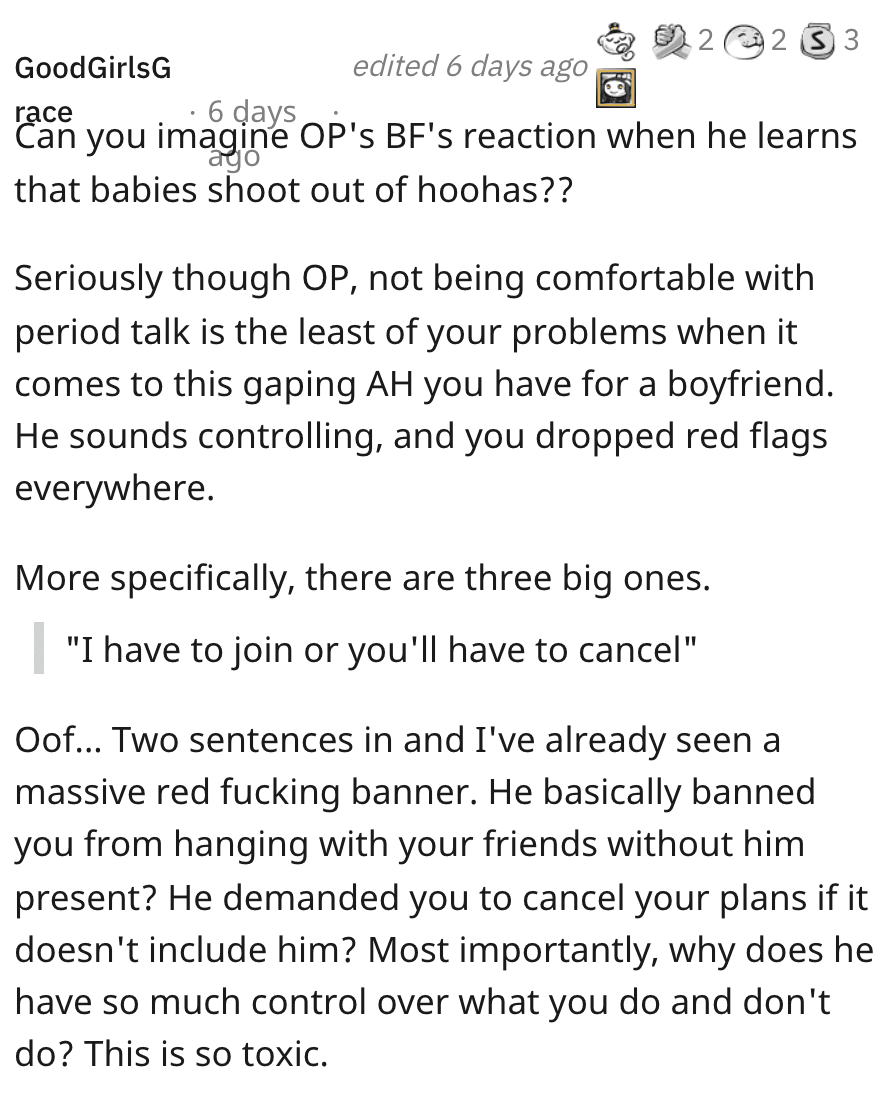 We are all sure she can find someone better. 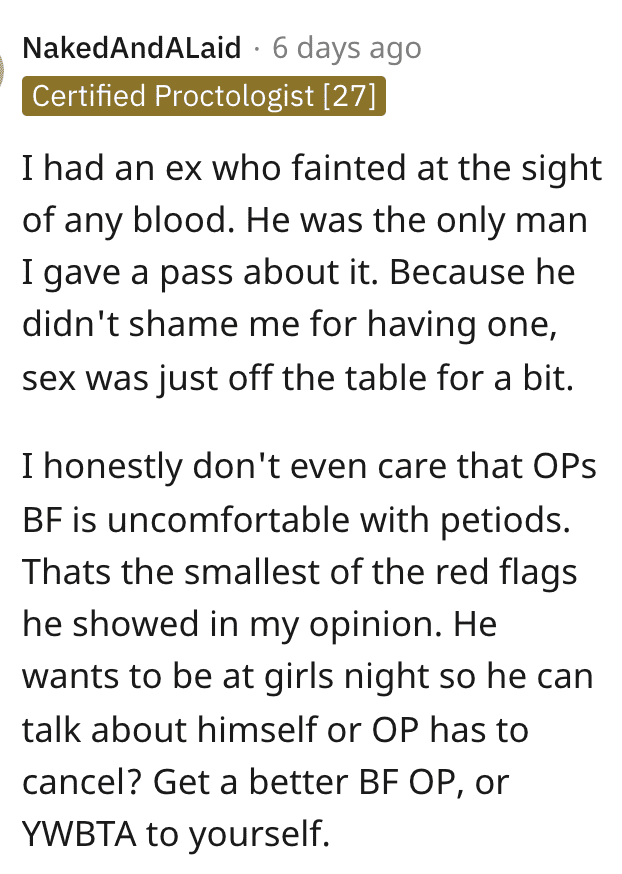 Sometimes you don’t realize saying ‘no’ is an option. 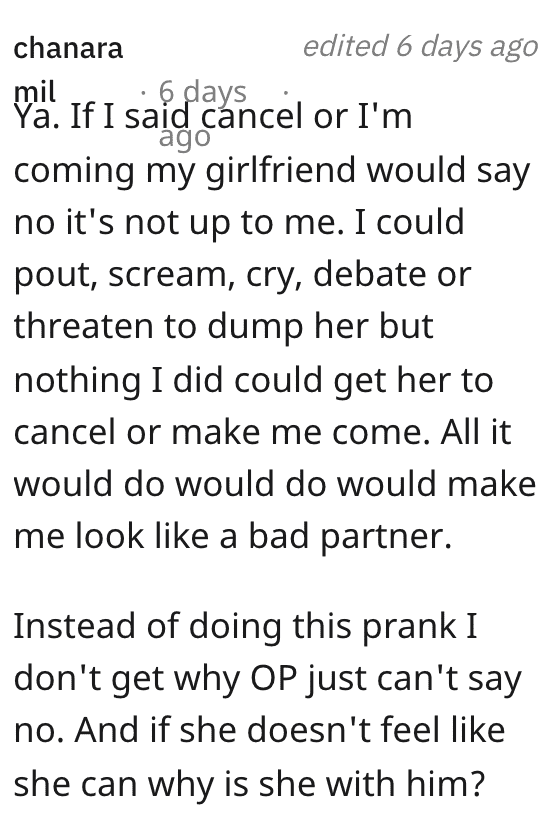 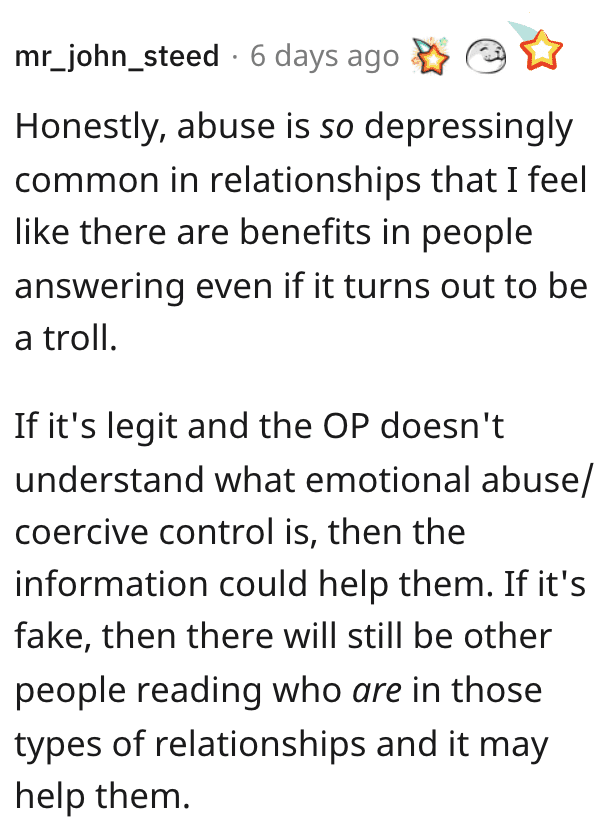 This is her update, so hopefully she walks away, taking nothing but the lessons learned along with her.

UPDATW Y’all wow, just got home and left this post at 70ish comments, and here I am looking at hundreds of comments but only read a bunch, you guys…thank you so much for your feed back and enlightening advice.

Just to add context: this is his apartment, he tells me who is and isn’t allowed to come and I thought this was fine since it’s his place (though I help with the bills, but he makes so much more as the head of security in his company so that’s that) I just can’t believe how dense and blind I been to his negative ways.

He’s still giving me the silent treatment and I’ve decided it’s just a lot to take, and so I’m temporarily moving in with one of the girls and will now be definately reconsidering few things.

Just wanted to keep you guys updated since many of you got engaged in this post, thank you so much for those DMing me their concerns, appreciate your time and concerns. Many hugs go out to you guys, I really appreciate y’all! 🙂

It stinks that so many women have to experience a bad relationship before they can realize what they deserve instead.

Did you have a “starter relationship” that opened your eyes? Tell us about it in the comments!