Should This Mother Have Given In To Her Son’s Request To Stop Seeing His Father?

Marriage is tough, and when kids are involved, divorce can be even harder. It doesn’t even have to be an official divorce, either; if you and the other parent of your child separate, tough times for all are probably ahead, no matter how maturely you’re able to handle things.

When children are little, their parents and the courts decided who sees who when, and for how long – but as kids get older, how much more say should they have in where they spend their time?

That’s the scenario that began this Am I The A$shole post, in which a couple who has been divorced for a decade found themselves with a fully-autonomous 15yo son with his own ideas about his time.

I (47f) have a son (15m) with my ex-husband (45m), with whom I have been divorced for a decade. In that time we’ve had shared custody; I have my son for the week and he stays over his father’s on the weekends. Over a year ago my ex has started seeing another woman, a widow (30something F) with a son (~8m?) and recently moved them in.

My son has been complaining to me about sharing his father’s house and time with his dad’s new girlfriend and her son; he explicitly said to me that it hurts that his father can no longer prioritize time for the two of them now that there’s four of them, as every activity, meal and event must now include them (especially during the pandemic).

The father has a girlfriend and she also has a son, and as they work on learning how to live together, communications – and happiness – break down.

This weekend broke the camel’s back; my son called me choking back tears and asked for me to pick him up from his father’s house on Saturday. Literally the first thing he said to me was “Am I old enough to change your custody agreement?” He explained that his father removed the playstation he had got him for his birthday from his room and hooked it up in the living room, saying he had to share it with his father’s girlfriend’s son, as they were now “a family.”

My son did the classic “You’re not my real mom!” speech and called me to pick him up- in doing so he said some very foul things about his father’s ex and even her son, which I refuse to punish him for.

Her “admittedly antisocial” son wants nothing to do with a second husband.

I have always raised my son to speak his mind and have self-actualization and confidence. He is, admittedly, a rather antisocial young man, but the few people he considers friends he has very deep attachments to. I have always told him that he did not need to make friends with everyone and that there were very few people he was “obligated” to have in his life.

He has made it clear he has absolutely zero interest in acting as a “big brother” or a “step son” and while his father is entitled to his love life, he wants nothing to do with it and is refusing to be in the house at the same time as his father’s girlfriend or her son.

Mom stood up for the son, Dad accused her of letting him do whatever he wants even though he’s too young to know what that is (you know the drill).

I called my ex today after speaking to my son and let him know of these changes, and also that I would look into changing our custody agreement to better fit my son’s wishes, which would pretty much give me full custody.

Well, of course my ex exploded at me; that I was raising my son to be “self-centered”, that it was “unreasonable” to refuse to be in the room with “a woman who will one day be his stepmom” and that I was “poisoning my son against [him]” and that he was “too young” to decide who he lived with.

At least a few of her friends have her rethinking her position, criticizing her parenting skills in the process, so now she’s wondering if she handled things wrong.

I relayed these struggles to a few of my friends and I was surprised by how sympathetic they have been to my ex husband; they think my son is being standoffish and rude, especially to my ex husband’s girlfriend’s son. One even told me that “this is what happens when you don’t teach your son to share”

So, AITA for seeking to change our custody agreement in accordance with the wishes of our 15 year old son, to no longer require him to see his father, because he has no desire to be part of a blended family?

In case you’re curious, here’s what the kid said…and she’s not making it so he can’t see his father, only that he gets to decide when and if he wants to do that.

ETA: I’m sure what my son said was paraphrasing, but what he said to his father’s girlfriend was “My father’s dick shouldn’t dictate my life” and to her son “I couldn’t fucking care less about you.” It’s not like he called them names, though he was rude.

ETA2: I must emphasize that changing the custody does not mean he cannot see his father. I am not taking out a restraining order against his father. My son and I decided on full custody for myself, but he can go see his father whenever he wants, if he wants. Under our current agreement, my son must see his father every weekend, even if he is not comfortable there.

My judgy face is on, so let’s see what the commenters have to say, huh? 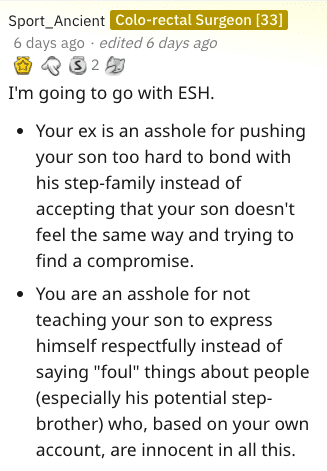 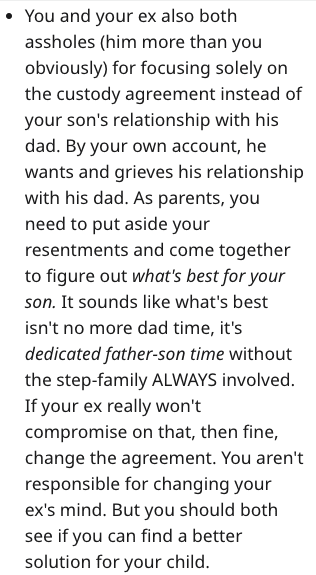 There was a lot of agreement that neither parent is really focusing on what matters most here. 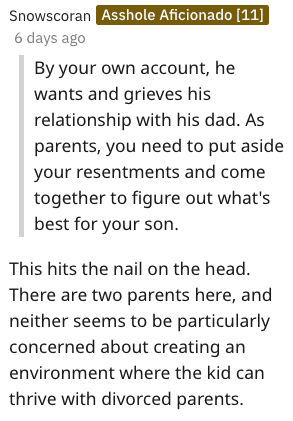 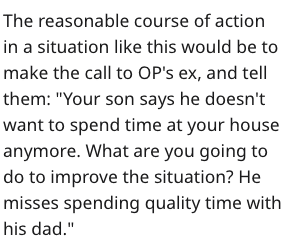 It sounds like a symptom of a bigger problem, if you ask me, but… 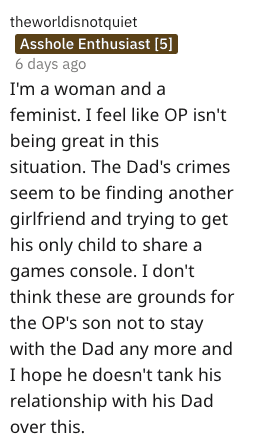 Many feel like she’s allowing her son to jump the gun because she doesn’t want to deal with helping mitigate the changes. 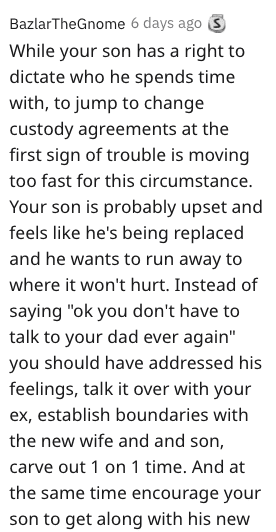 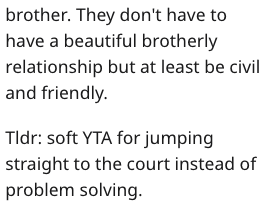 And her friends (and I) aren’t the only ones raising an eyebrow at her parenting skills. 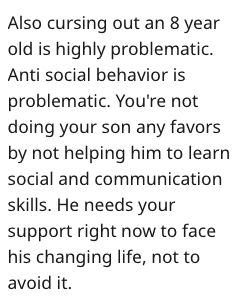 Everyone definitely sucks here, and personally, I think if these parents don’t get a handle on things they’re going to have bigger and worse trouble with that kid in the future.

Do you agree? Not agree? Sound off in the comments!

Read Also:   Parents, You're Going To Need This Vacuum Cleaner Attachments That Sorts LEGO By Size