Should This Guy Pay Half The Expenses For The Puppies His Dog Sired?

This is one of those posts that you think you might be able to judge based on the headline…but after reading the whole thing, you just might end up feeling differently.

OP owns a hobby farm with goats, sheep, and a couple of dogs to keep the predators at bay. His male dog is unaltered (we presume he studs it out) and his female dog is spayed.

The dogs are contained properly and do not escape their enclosure, but for obvious reasons he doesn’t allow other dogs on the property unless he’s there supervising.

I know this sounds insane but its been causing grief for weeks.

I moved back home a few years ago to take over my parents’ hobby farm. My parents asked I continue to keep sheep and goat herds. Predator animals are common so we’ve always had livestock guard dogs there. I have 2, they are very well trained and socialized, but I don’t allow dogs I don’t know on the farm unless I’m there the entire time.

The set up is like an ‘H’ – One side is the sheep pastures/barn, the other side is goats. In the middle is a gigantic fenced in area for the dogs where their toys, feeders, water troughs, wading pools and dog sheds are. They can go from one pasture to the other. The gate to the dog area faces the back of the house. It was a regular garden gate but I fixed it so predators couldn’t climb over the top of it. The only space is about a 8inch gap between the top of the gate and the gate post to move the latch easily. Too small for my dogs to squeeze through and nothing has gone through there before.

One of my dogs is a male and not neutered for reasons relating to the community and us all knowing where our helpers come from and are going to since these doggos perform a specific function in a farming community. Other dog is an older female and spayed.

Recently he was going out of town for work and a friend was coming to stay with his girlfriend in his absence. She brought her dog even though he’d asked her not to, and both she and his girlfriend didn’t seem thrilled about his “controlling” behavior regarding the dogs.

My job requires me to travel once in awhile. I had a week trip about 4 months ago. My gf invited her friend Taylor to come stay with her while I was gone. Before Taylor arrived she asked us if there was a room she could put her dog’s crate in.

I told her not to bring her dog since I’d be gone. She arrives, she has her dog. In heat. My gf told her she could bring her. I offered to pay for her dog to go to the local kennel since I’d be gone, my gf and Taylor said I was controlling. I told them I just didn’t want to leave room for issues.

Day before I have to leave, Taylor let her dog out unsupervised and I caught her dog trying to squeeze through the gap of the gate.

Got her dog, brought it back in, told her she either keeps her dog on a leash and supervised at all times when outside, or she goes home now.

OP had to leave to go out of town before things were resolved.

Lo and behold, a couple of months later the friend’s dog had puppies that look exactly like OP’s male dog and the friend wants him to pay half the vet bills.

My gf and I fought about it again, and I had to leave for my work trip before it was resolved.

I asked my cousin while I was gone, he said he and his wife saw the dog on the leash. Taylor left the day I got home. Weeks later her dog had puppies.

Gf admitted they only put Taylor’s dog on the leash when my cousin was over, and let her run the rest of the time. Her dog kept getting into the dog yard with my boy and they stopped her if they saw her.

Taylor wants me to pay half of the vet bills and puppy expenses until they’re homed. She’s railing about me to my gf about not having my dog neutered. I refuse to pay.

My dogs are contained and they stayed where they are supposed to be, and I told Taylor to not bring her dog to begin with.

She and my gf can cover the expenses since they went behind my back. Am I in the wrong here?

He doesn’t think he was in the wrong, since they expressly went against his rules/warnings, but he’s wondering what Reddit’s thoughts are on the matter.

You know they have plenty!

The top comment says the friend is either very dumb or did this on purpose. Either way, it’s not OP’s responsibility. 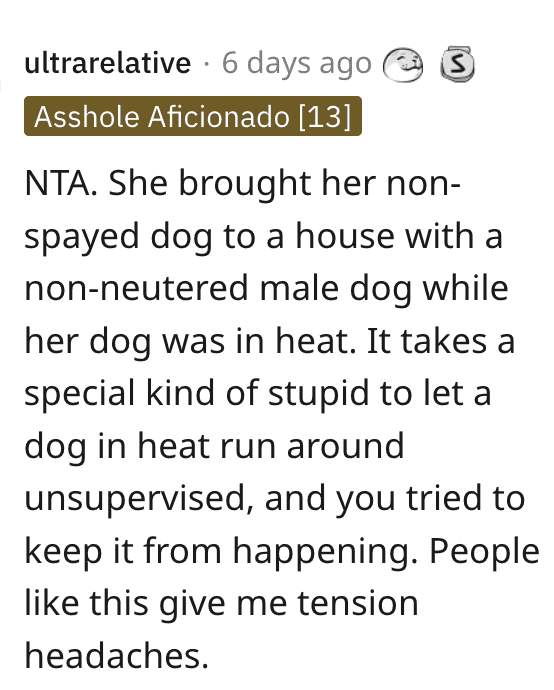 And almost everyone agreed that the girlfriend is also most definitely in the wrong, here. 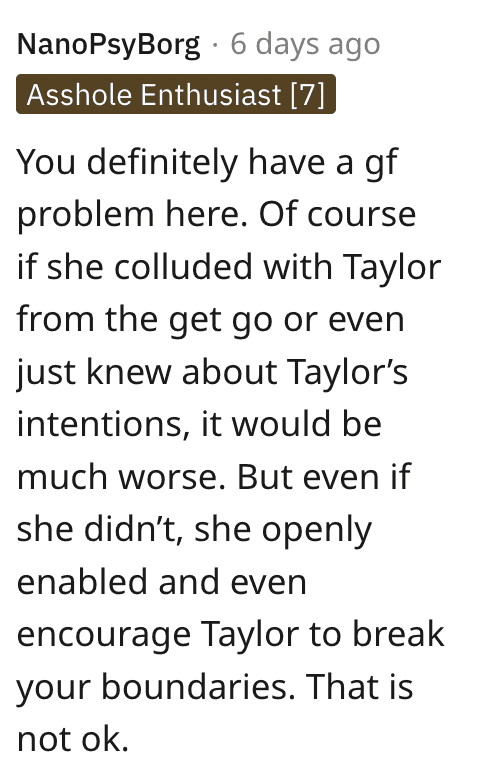 It’s time they had a serious chat. 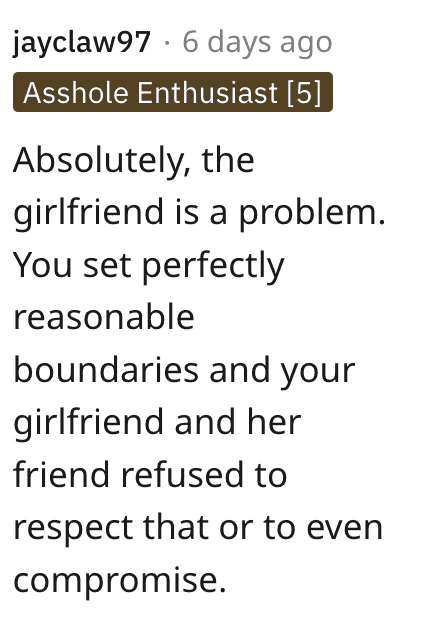 To be honest, we’re all going to need some answers, here. 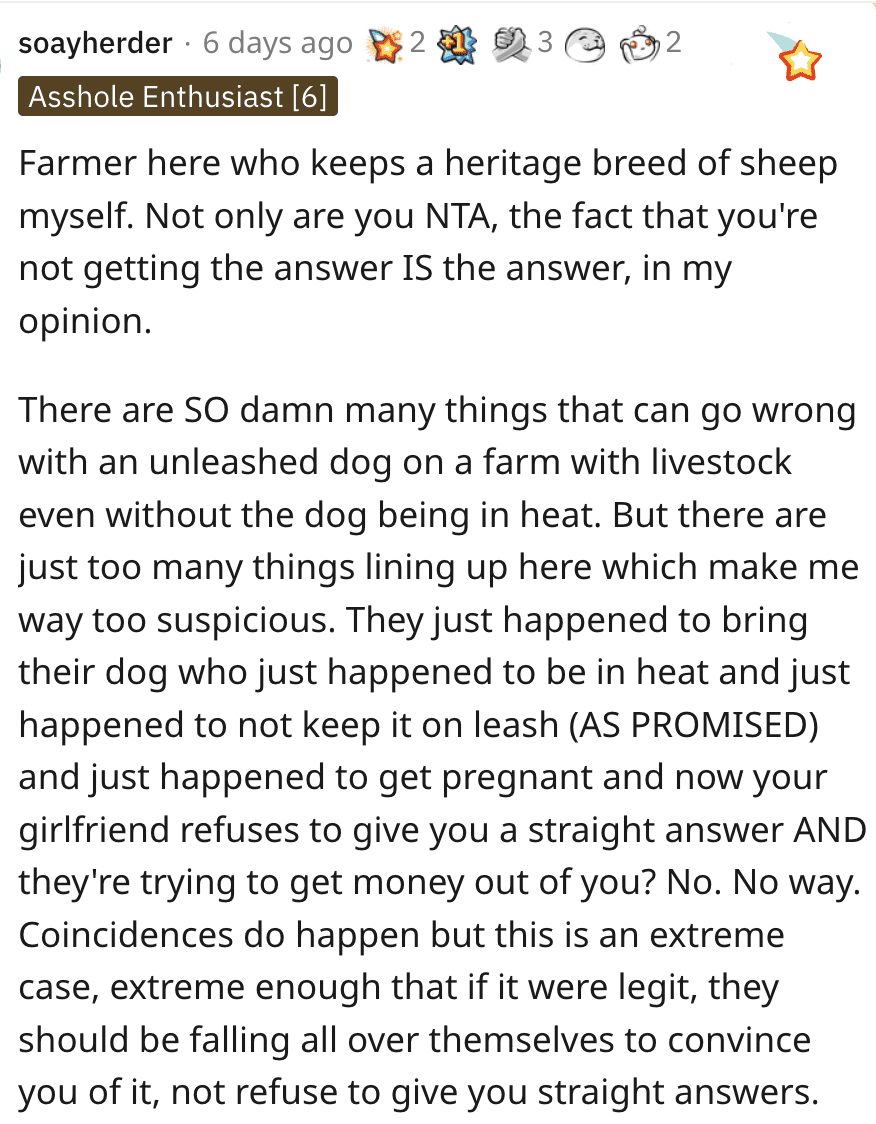 This person takes things one step further and thinks OP should be the one demanding money, since he usually gets paid for his dog’s stud time. 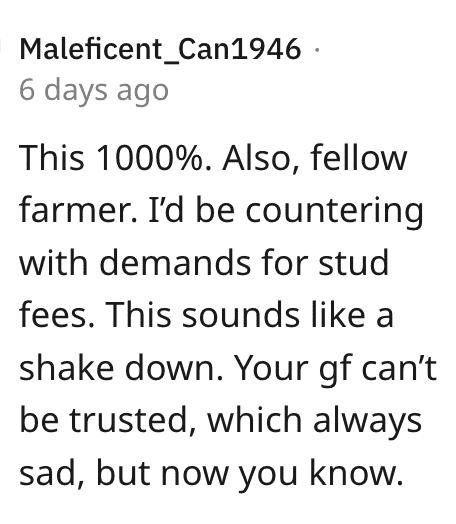 This girlfriend is super sus and I bet she won’t be the gf for much longer.

How would you handle this? Would you have forked over the cash? Tell us why or why not in the comments!