For some reason, weddings can bring out the worst in people. I don’t know if it’s the money, the sense of losing/gaining family, or something else altogether, but there are so many posts asking about how to handle someone behaving badly around the event.

In this woman’s case, her mother has an issue with her marrying her fiance because he is terminally ill.

I’m 21 years old, my fiance is 22, and has terminal cancer. We’d been together for almost 3 years by the time he was told his cancer was terminal, and we decided we wanted to spend our remaining time together as husband and wife.

When I told my mum, she strongly discouraged me from getting married to him.

Her reasons are very cruel, in the opinion of the bride, and have nothing to do with either of their happiness around the marriage.

She said there’s no point in getting married to someone who’s just going to die soon after.

She was saying things like “do you really want to be a 21 year old widow?” and “what will those wedding photos even look like? Do you want wedding photos where you’re standing next to a groom who looks all sick?”

OP told her that, unless she made a genuine apology, she would not be invited to the wedding.

Though her mother has “apologized,” none of them feel sincere enough for the couple to change their mind.

I was really disgusted by how cruel she was being about my fiance and his illness. I decided she wouldn’t be invited to my wedding unless she genuinely apologised.

When she finally did apologise it wasn’t genuine, it was like “well I’m sorry, I just wanted to share my concerns” and “it’s just my opinion, I’m allowed to have an opinion, aren’t I?”

Mom and the rest of OP’s family think OP is being unreasonable and hurtful, but OP is standing her ground.

She says it’s horrible to not invite my own mum to my wedding just for sharing an opinion. She keeps trying to defend what she said and getting mad I don’t consider it enough of an apology to let her come to the wedding.

My dad and sister are also pretty mad at me, and they think I should just let it go just enough to let her come to the wedding, and have a conversation about it later.

PS: OP does not live in the States so she doesn’t have to be worried about having to pay back his debt after his death.

Edit: I don’t live in the US. Being stuck with his medical bills isn’t a problem here.

My sincere condolences to all of you in the US who have to worry about something like that while dealing with an illness or with the illness of a loved one.

Does Reddit agree with the bride? Or should mothers of the bride have some weight of their own? Let’s keep reading to find out.

Beware: the top comment will make you feel as if someone is cutting onions. 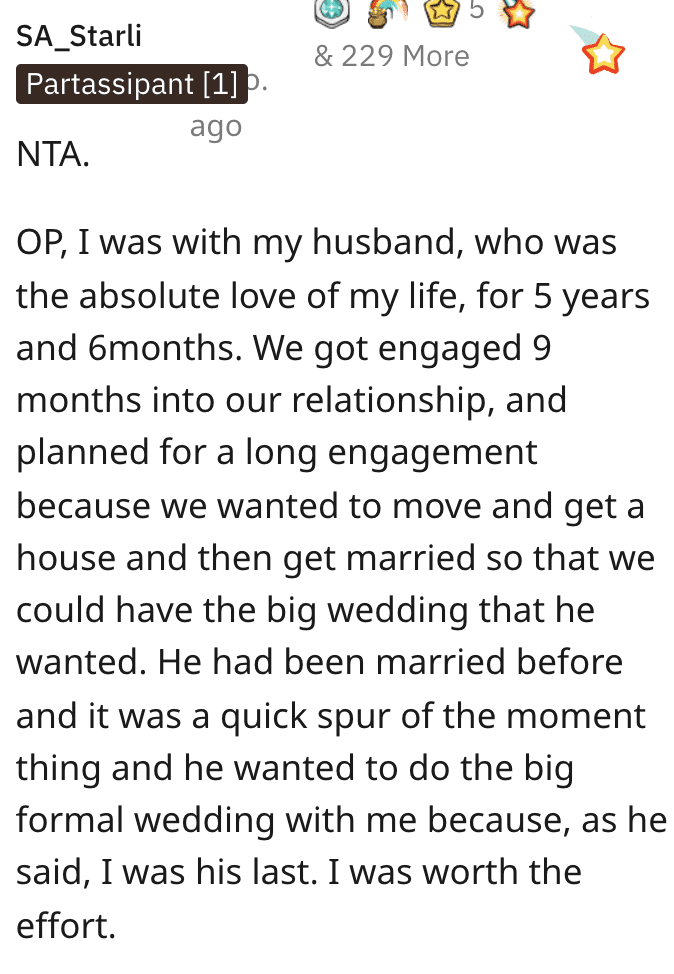 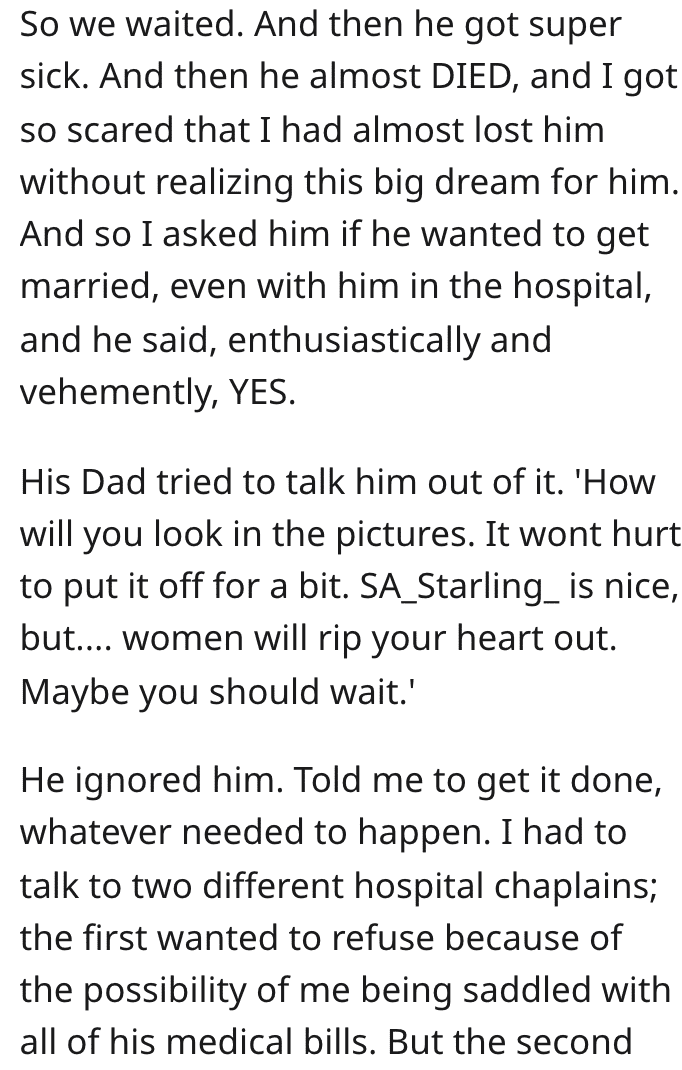 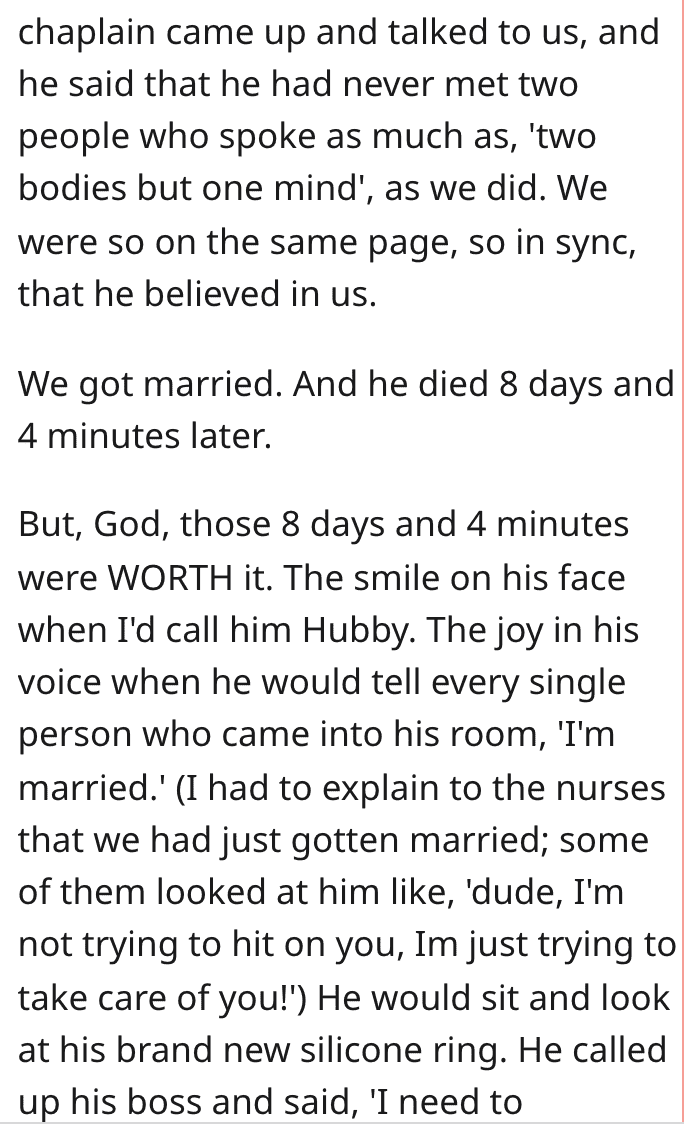 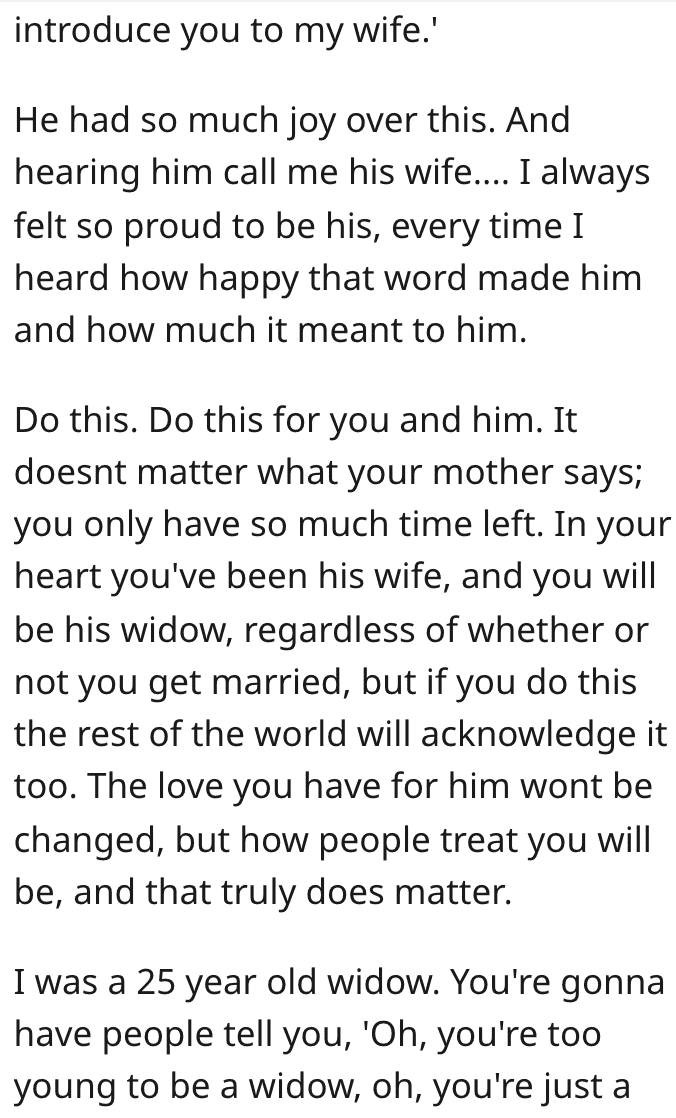 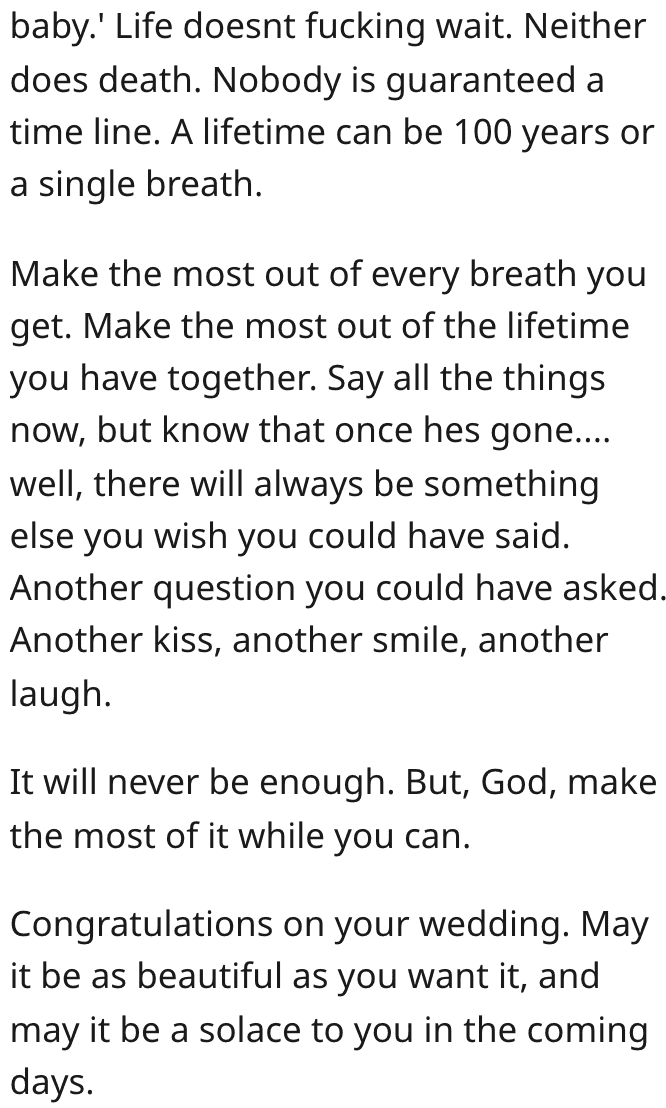 This person points out that it doesn’t sound as if the mother’s concerns are coming from a place of love at all. 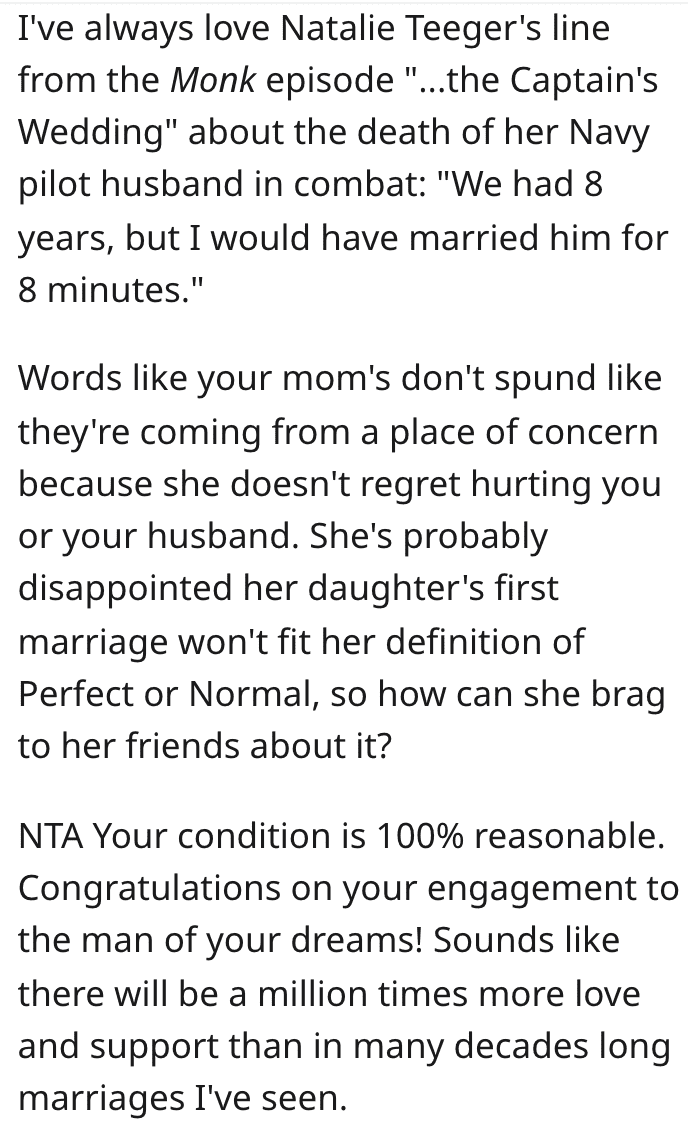 This definitely struck me, too. 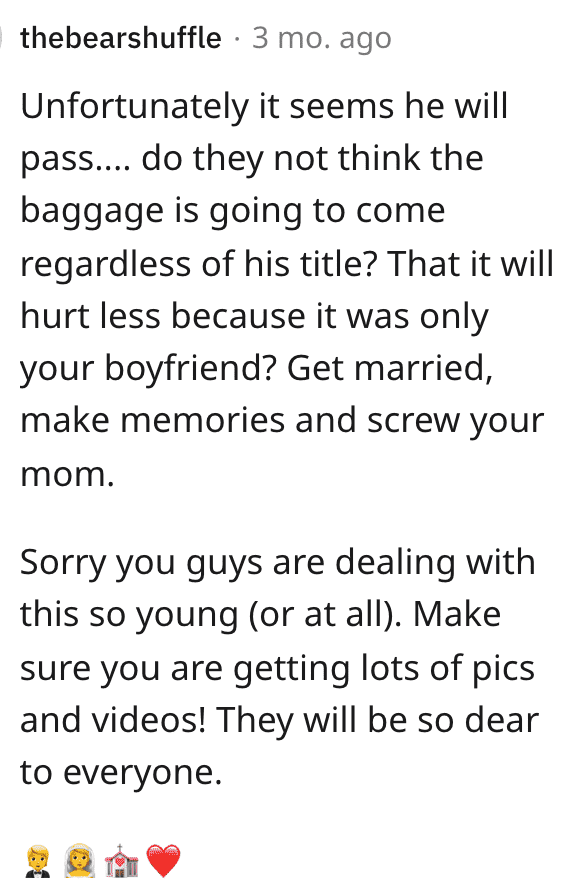 The memories will always be worth the pain. 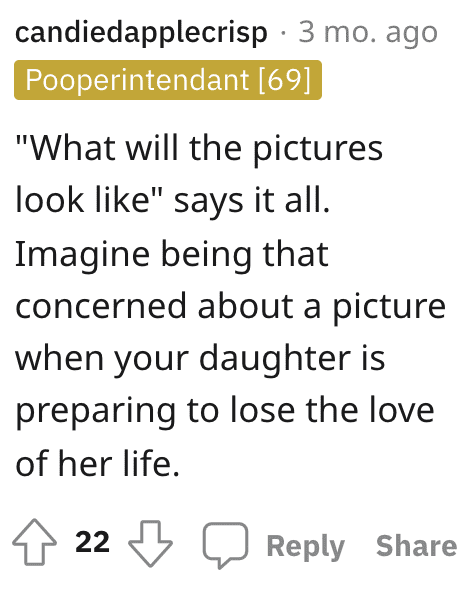 After all, there are no guarantees in life. 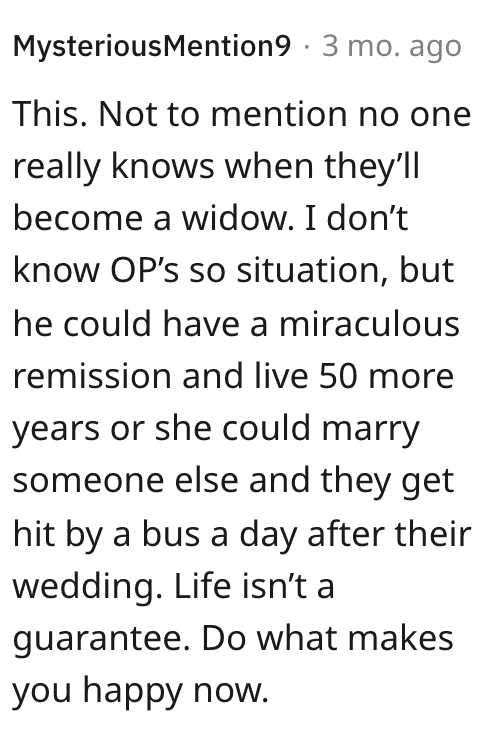 I feel so bad for this woman and I hate that her mother is making everything worse and not better.

Would you get married anyway? Would you not? Let’s chat about it in the comments!

The Irish Crown Jewels Have Been Missing for Over a Century