Should Kids Be Taught To Include Everyone

Parents these days are putting a lot more intentional thought into how they raise their children these days. While that’s definitely a good thing, there are times when policies and feelings seem to conflict with what our kids are being taught by others.

For this woman, it was a school policy for inclusion that gave her pause, because she’s been working to give her daughter agency and the tools to say ‘no’ when someone else makes her uncomfortable.

Specifically, a boy has been bothering her and her friends on the playground. She’s informed the teacher and her mother when these incidents occur.

My daughter is 12, I’m trying to teach her ways of creating and respecting her boundaries that are age appropriate. Teaching her that it’s ok to say “No” to things she feels uncomfortable with.

There is a boy in her class who keeps bothering her and her female friends at recess. I’ve encouraged her to go to me or her teacher when this happens.

In class, the same boy wanted to join a group that OP’s daughter and some friends had established.

They told him no, because their group was full. He pushed back, and her daughter told him that they didn’t want him to be in their group and he should find a different one.

He told her that was against the rules.

My daughter told me a few days ago that in class, the teacher had asked the kids to form groups of about four or five. She had formed a group of five with some other girls, then the boy who had been giving her trouble at recess came over and said he was joining their group.

Another girl said that they already have five, and he should work with a group who only have two or three people.

He said no because the teacher had said “about” four or five. My daughter then said that they didn’t want to work with him, and he should find another group.

A few of the other girls agreed with her. He said that “you can’t exclude me like that, it’s against class rules” and she said she didn’t care.

Later, OP got an email from the teacher wanted to discuss her daughter “excluding a classmate.

I heard about this from my daughter first, and the way she talked about it, she had been firm but not unkind.

But then I got an email from her teacher saying she wanted to call. She said there had been an incident at school where my daughter had excluded another child, and that wasn’t allowed in her class, and she wanted me to have a talk with her about it.

Her telling of events was the same as my daughter’s. I felt proud of my daughter for her honesty.

OP replied with a firm and well-worded email about why she didn’t feel comfortable telling her daughter she had to include someone who made her uncomfortable, which resulted in the teacher setting a meeting with OP and the principal, as well.

I sent her an email saying..

I’m sorry, but that is not a lesson I feel comfortable teaching my daughter.

She’s at the age where she is already having to deal with unwanted attention, and I’m making a point to teach her that she does not have to be around anyone who makes her uncomfortable. And that a young lady is able to choose to spend time with people who make her feel respected.

I understand you already are aware (Boy) has been behaving in ways that she feels uncomfortable with at recess, from our prior conversations.

I think it is a very dangerous lesson to teach a girl she has to include and be kind to everyone, instead of teaching her to be aware of when someone is not respecting her “No” and stepping out of the situation.

I hope I don’t have to explain in too much detail why I find this important… But to put it briefly, I was brought up with the “Include everyone” mindset. No exceptions. It taught me to ignore my own comfort level, and as I became a young adult I became the victim of men who used my inability to say “No” to their advantage. It’s a dangerous lesson, and no longer appropriate at that age.

She emailed me back asking for a meeting in person with the principal. I’m preparing for that but wondering if my email was too harsh

AITA for my response to my daughter’s teacher?

Was OP too firm? Rude? She wants Reddit to give it to her straight!

The top comment points out that the boy should be held accountable, too. 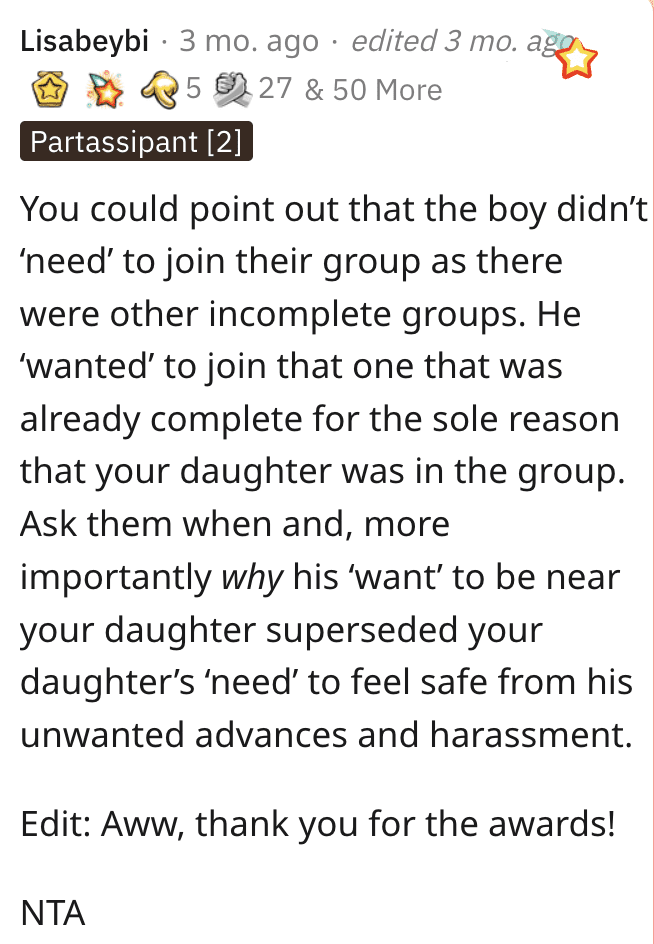 And this teachers says, if anything, OP wasn’t harsh enough. 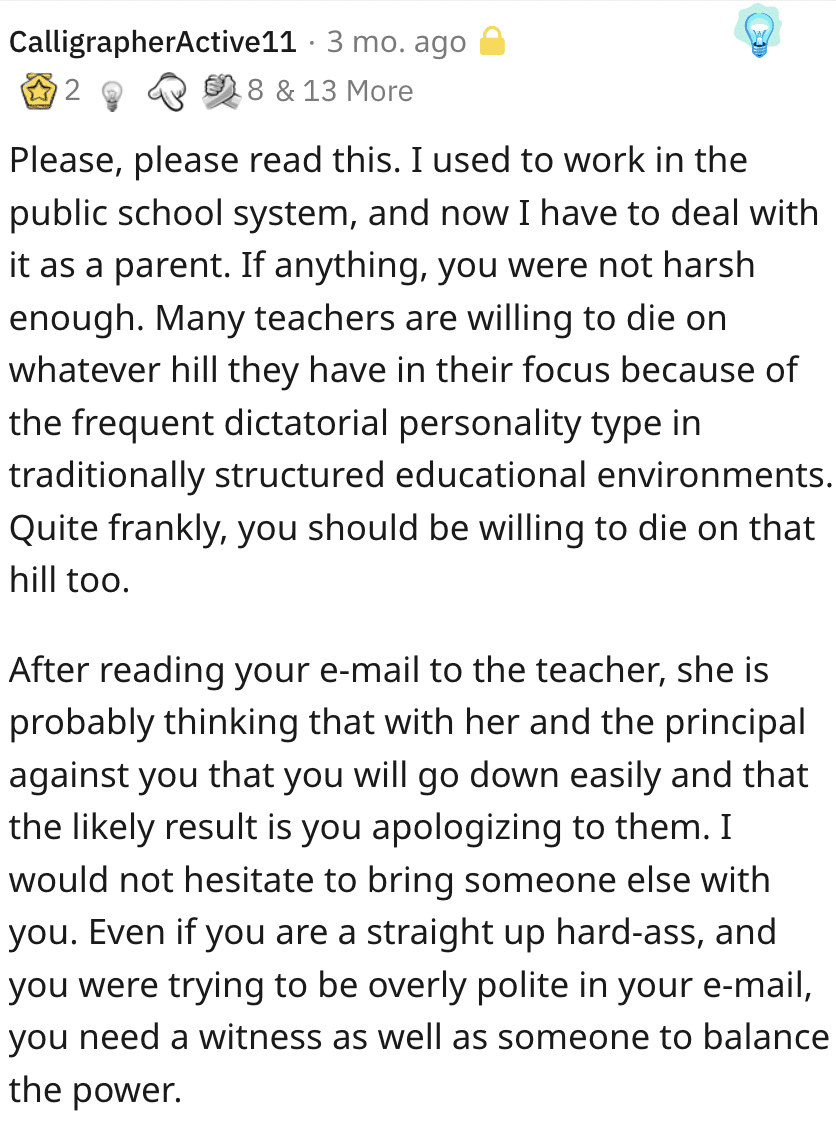 They definitely think this is a hill to die on. 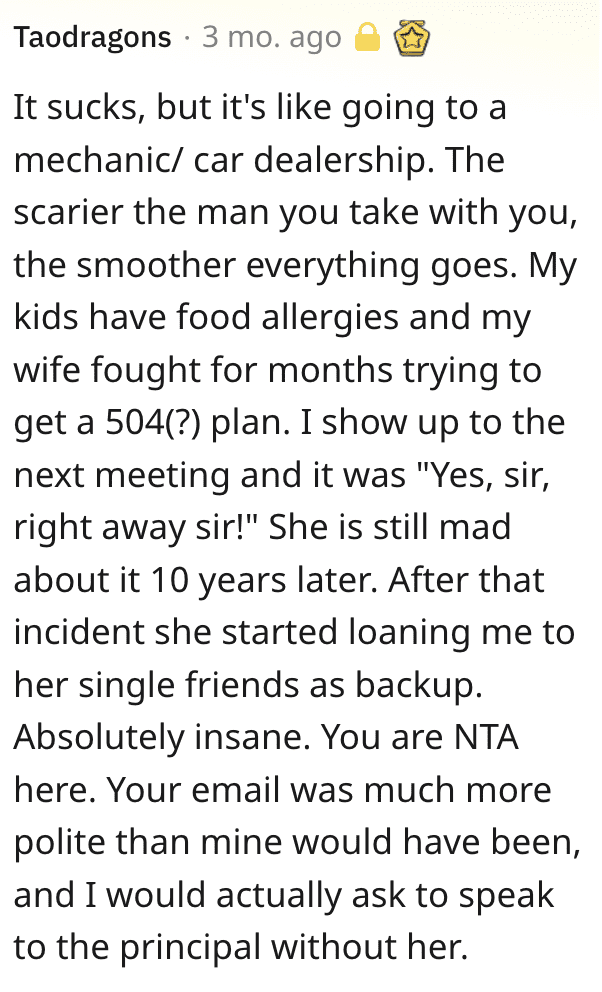 This is the bottom line. 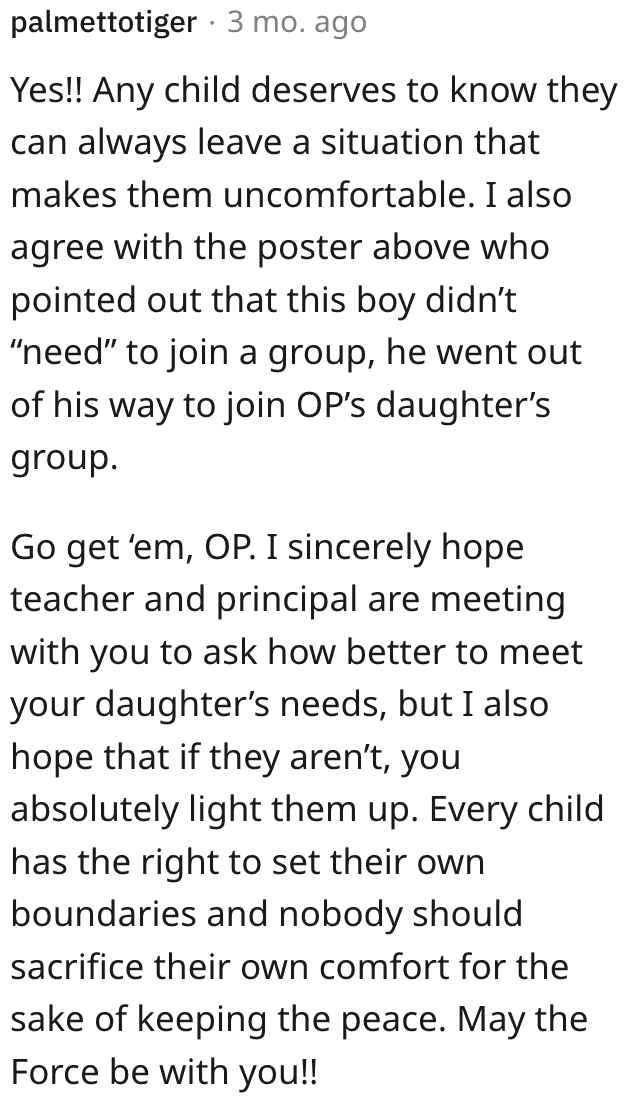 Consent is the word of the day. 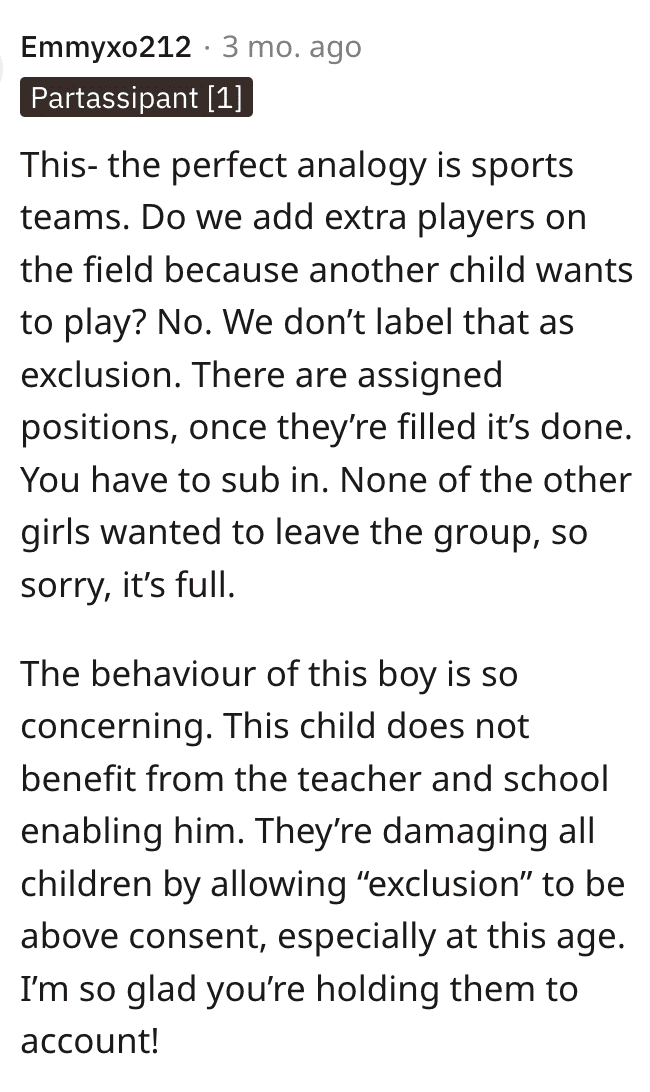 In case you’re wondering, here’s an update – and there’s a happy ending to this story.

I reached out to the parents of the other four girls in the class who were involved, and we all coordinated to go speak to the school administration together. They had similar views, thinking it was inappropriate for the school to expect the girls work with someone who they’re not comfortable with, and frustrated the teacher didn’t do more to deal with the issues during recess that made the girls uncomfortable to start with.

I ended up asking the school if we could reschedule the meeting to a time all the involved families could make, and we ended up meeting this afternoon along with my husband, another couple, two mothers, and a father. Along with the teacher and principal.

We all presented a united front asking for the following…

The school does training for the teachers on trauma-informed teaching methods and the dangers of expecting young women to go against their best judgement of their own boundaries to be “nice”. Instead of “Include everyone” the kids should be allowed to respectfully set boundaries and taught to respect each other’s boundaries.

The school addresses harassment in class or at recess and doesn’t enable it to continue.

We went to talk, and I think it went a lot better having all the parents join instead of if I’d gone alone. The teacher and principal apologized and the principal agreed to look for resources on how to better navigate the balance between being inclusive and not forcing kids into including someone who is crossing a line with them.

Thanks a lot for all the amazing advice in the comments, I cannot believe how much this blew up and I’m so grateful to everyone who replied with advice and support. And honestly was getting pretty emotional hearing how the lessons I’m trying to teach my little one resonated with other women, whether they’re moms too, or have been through some of the same struggles I have.

Not all people who pus back against school administration and policies turns out this well, but I’m happy that this one did.

There’s a fine line between inclusion and taking away a child’s voice, and I don’t think anyone wants the latter to happen, right?