Should A New Employee Be Allowed To Change Workplace Culture?

Workplace culture is an interesting thing. The longer you’re there, the more used to it you get, and you forget that it might seem odd to outsiders.

This person works in healthcare, and everyone in their department enjoys going by nicknames that are silly and fun.

I work in a hospital with around 6-7 other guys in my department, along with the chief of our department.

A part of our workplace culture, which I frankly find cool, is to have nicknames at work. Our nicknames are pretty much interchangeable with our actual names. Say, my name’s John, but sometimes they’ll say “Hey involve “nickname” in this case too” or say “Hey John how was your weekend” and I’ll respond “Boring, “Nickname” what about yours?”

The nicknames aren’t anything offensive at all btw. Here’s the rundown, we’ve got Speedy, who got her nickname because we saw her sprint once and she is insanely fast. Archer, a former archery champion. Seer, because she is super into Divination. Snowborn, because he’s never cold. The chief, who’s nickname is The King.

The story of The King is actually pretty cool tbh, he was the youngest ever chief of any department and one of the older folk called him the Boy King. He’s definitely not a boy now, so he’s just The King.

OP likes his, as well, and thinks that it keeps an often somber atmosphere a little more upbeat.

My nickname is The Gravewalker. Reason being I work the graveyard (middle of the night) shift most of the time. I love it, the hospital is nice and quiet and the only patients that come in are real cases that genuinely need help. I also have some scars which contributed to the “badass” nickname according to the Chief.

Personally, I think the nicknames are great, as do the rest of us, because it’s brought us all a little bit closer and, frankly, my nickname’s cool. Call me immature but we work dead serious jobs and need a little bit of humour and fun sometimes.

Recently, a new employee was hired. She doesn’t like the nickname thing at all and refuses to use or respond to them.

She even came at OP telling him that his was vulgar and offensive and that he should have refused it.

A new girl joined us and she was very against nicknames. She found out when someone said “Hey, involve The Gravewalker in this case, he’s experienced with this.” And she found me scary to approach cus of that name.

She now refuses to call anyone by the nickname and if I reference someone by the nickname, she used to just flat out ignore me. The Chief had a chat with her about respecting the workplace culture, and how she needs to integrate better.

OP states they have not given her a nickname and they have gone out of their way to not use them when communicating with her, but otherwise thinks she was out of line.

So instead she came after me, yelling at me about how my nickname is vulgar, unprofessional and I should have denied it when they gave it to me. She told me to talk to everyone, but make it seem like it came from me so she doesn’t get into trouble.

If it’s relevant, we haven’t given her a nickname yet and now we try to reference each other’s names when talking to her. I also told her to go fuck herself when she came yelling and she looked like she was about to faint.

The top comment decrees that the new employee can ask that things be done differently, but coming in and demanding it is a whole different story. 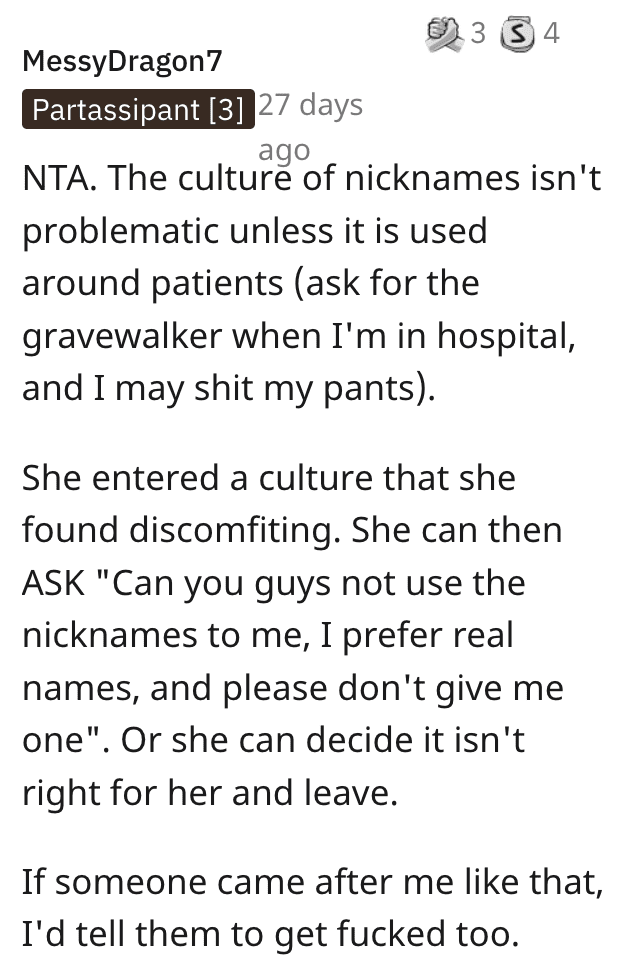 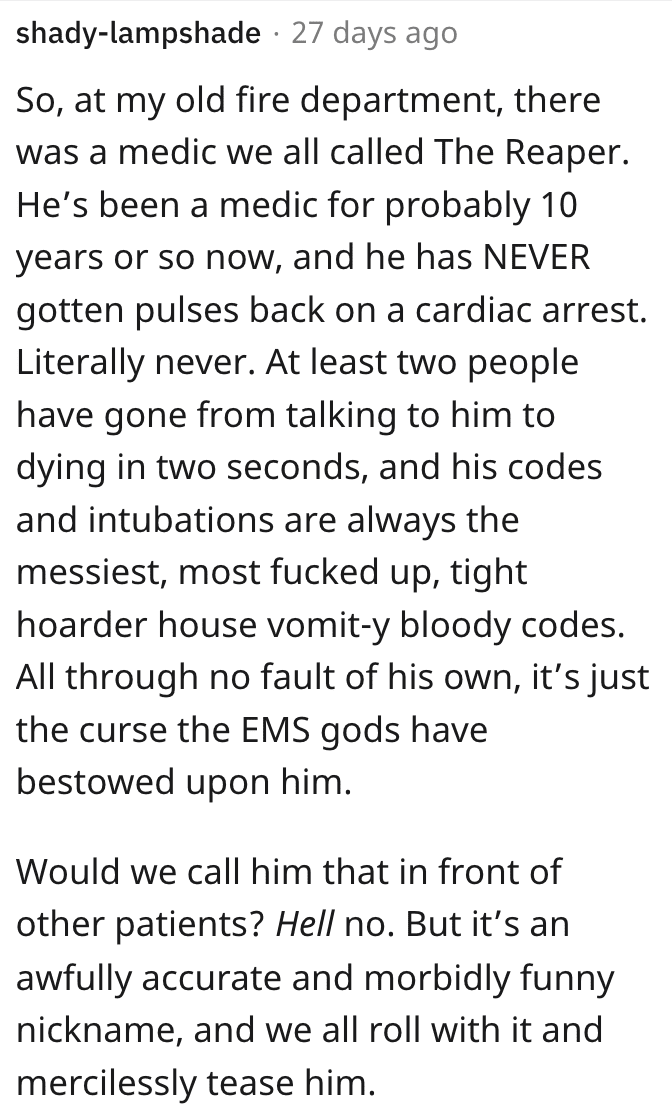 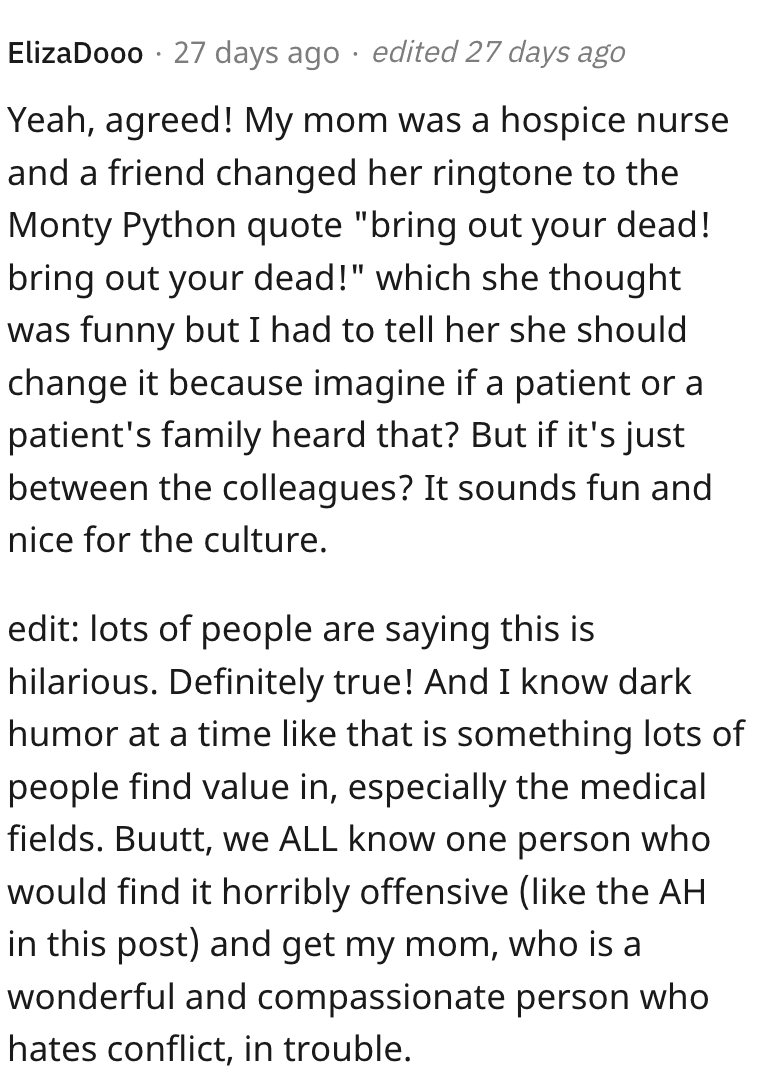 The good news is, she probably isn’t going to be there long. 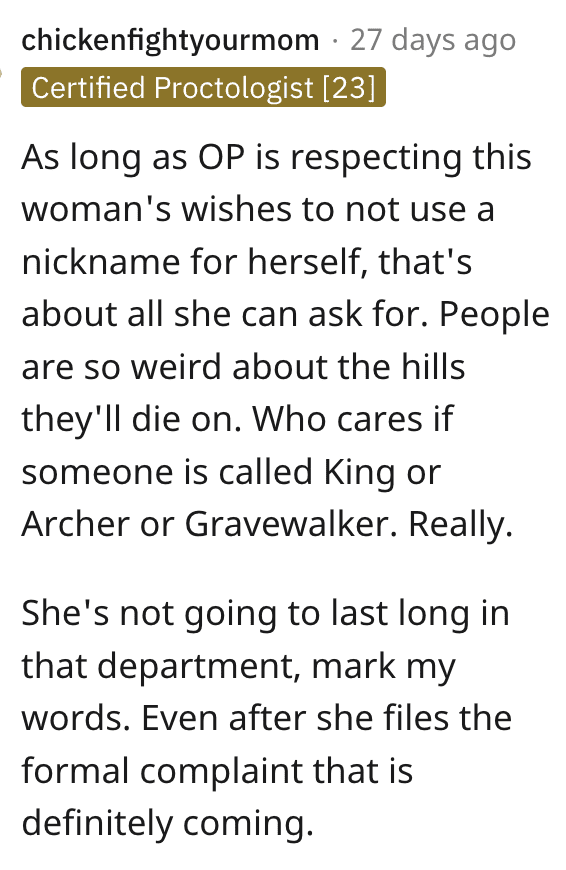 Also, people who work in healthcare should realize that death isn’t vulgar or offensive. 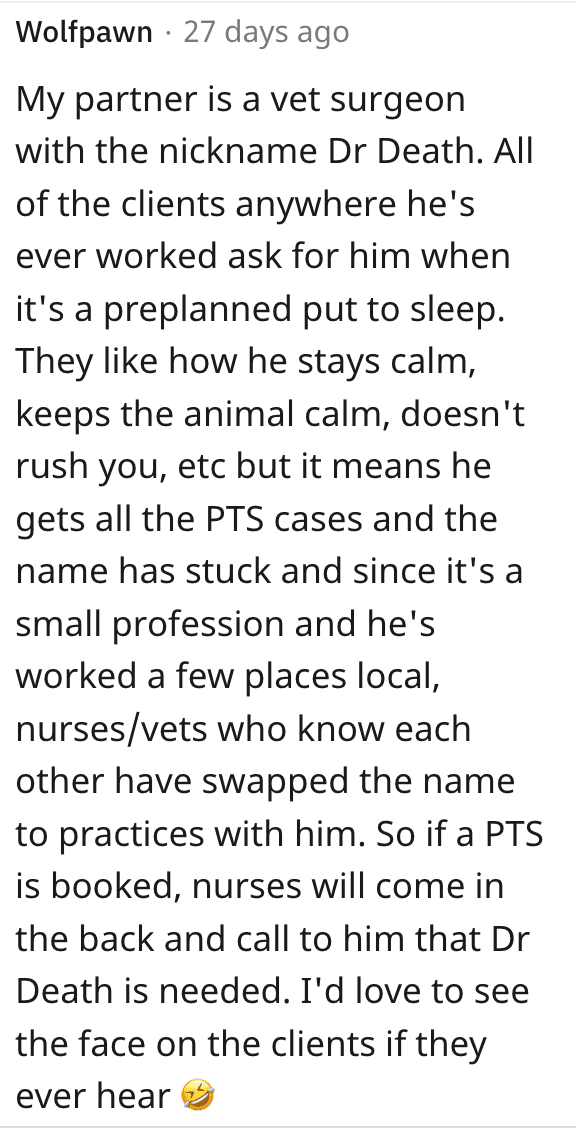 I agree that this seems harmless and as long as they’re respecting her wishes not to play along, she should respect their game.

What about you? Would you have the gall to demand a department change their ways? Tell us why or why not in the comments!