She’s Going to Report a Co-Worker Who Announced Her Pregnancy at Work. Is She Wrong?

Maybe I’m missing something, but aren’t women supposed to announce THEIR OWN pregnancies?

I think I’m right about this one!

And I can see why this woman is pretty p**sed off about what he co-worker did to her…but did she go too far?

Read on to get the whole story…

“I F33 have been working in this company for 4 years. I have great relationship with my co workers and one of them is “Austin”. Austin is incredibly sociable and easy to adapt with new coworkers. We talk about all kinds of stuff while of course keeping it professional.

I’m married and recently found out I was pregnant but only my husband knew about it. Haven’t even told anyone in our families or friend circle. The other day at work me and the co workers were on lunch break and Austin was with us. We talked then he suddenly got up from his chair and asked for everyone’s attention for a minute.

I didn’t know what that was about til he loudly announced that I was pregnant. I was stunned, like mouth open eyes not moving just staring at him as he and the other rushed to congratulate me and flood me with well wishes and parenting jokes and advice. I was in utter shock I asked how he knew and he said “remember when you gave me a ride the other day?

I saw your pregnancy test result on the dashboard” my first action was lashing out at him in front of everyone asking why the hell he just shared a private medical information at my workplace. He said he was just sharing “our joy” with everyone else since only him and I knew.

Other co workers asked that I calm down but I meanly told him he was out of line and that I will be reporting him to my superior for this then stormed off while Austin just stood there.

My female co workers came to tell me how rude I was towards Austin’s “nice gesture” and insisted I hurt him and that I overreacted especially for saying I will be reporting him since he was just sharing happy news with everyone and I was just being too sensitive but I felt my privacy was violated plus I wanted to tell everyone on my own terms. Still my co workers tried to talk me out of it. Not just that but apologize to him for lashing out like that.

AITA for my reaction?”

Take a look at what Reddit users had to say.

One person said she’s NTA and that was very inappropriate. 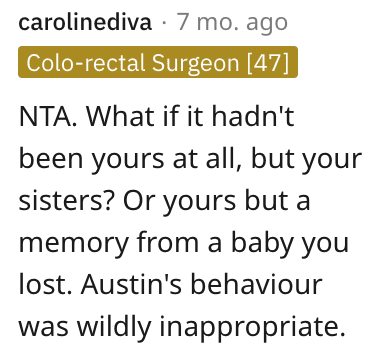 Another reader agreed and said you should never do anything like this without permission. 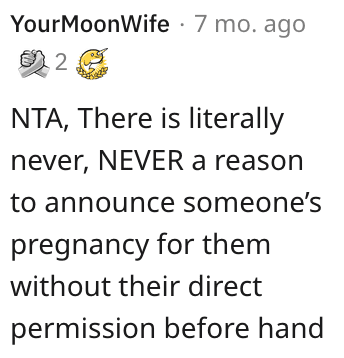 Another individual said she’s NTA and she needs to report him to HR. 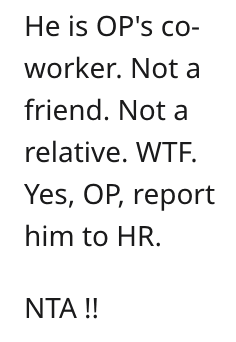