She Yelled at Her Boyfriend When He Made Her Leave Her Best Friend’s Wedding. Did She Overreact?

Guys, a word of advice for you: it’s probably not a great idea to make your girlfriend leave a wedding.

Who would have thought?

But here we are…

Check out this story and see what you think about what happened.

“My boyfriend, 27, and I, 26 have been together for 2 years. He’s a good heart and is normally rational but his one issue is that he expects to accompany me in every occasion no matter how big or small. He even went with me to my ex boyfriend’s funeral after days of begging.

Now my best friend got married few days ago, it was very small and only close family and friends were invited, My boyfriend couldn’t come because of the + one rule. He pitched a hissy fit saying my best friend has no respect for my relationship and was shocked when he learned that I was still going to attend.

He told me that if he can’t go then I’m expected to not go as well but that is my best friend and I had to respect her rules. He gave me an ultimatum either we go together or I stay home with him. I ended up going cause again I respected my friend’s rules. He was angry with me and kept calling the entire 2hr drive then stopped. Later I got a text from his friend telling me he (my boyfriend) got into an accident and was taken to the hospital. I freaked out he gave me the address and I had to leave the wedding and told my friends why.

I was a crying the entire drive home and kept calling his friend but got no response. I arrived to the hospital and asked about my boyfriend and they checked and told me he wasn’t there, My anxiety reached 160% as I kept calling his friends one by one. I just went home and there he was…along with his friend. He saw me and said that he was sorry but this was the only he can get me home after I left him alone.

After the initial shock I just blew up yelling at him about lying and making me leave my friend’s wedding and having me literally go to the hospital and freaking out cause of him. I kicked his friend out and we got into an argument. He kept talking about how much I love him thus I left which is my own doing not his and he was just trying to see if I really chose my friend’s wedding over him.

He then argued that my friend caused this and I shouldn’t agree with her to exclude him, I said what he did was horrible and called him horrible and then went to my room. It was awful cause my friends kept calling to check in on him cause they thought he was really at the hospital. He said I overreacted and that I yelled at the wrong person.

This person said that this woman is NTA and that she needs to get the hell away from this guy. 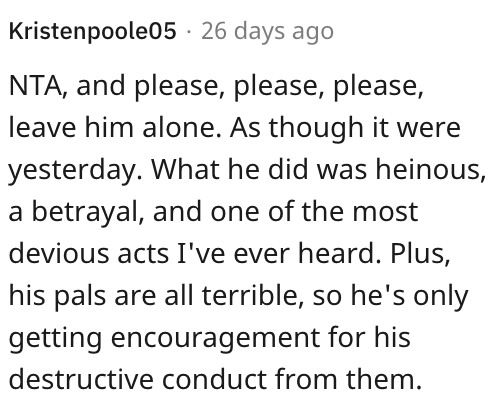 Another reader said that this guy loves to control her, no doubt about it. 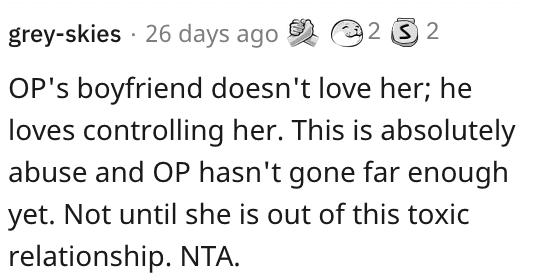 And another individual agreed that she’s NTA and that she needs to dump him as soon as possible. 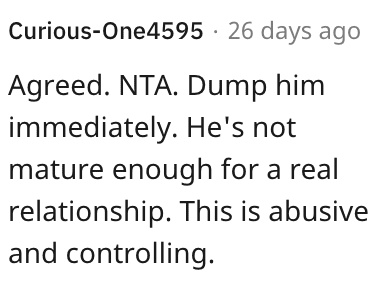