She Wore a Wedding Dress to Her Brother’s Wedding. Was She Wrong?

Just judging from this headline alone, this really does not sound like a good idea…

But, as we always say about stories from Reddit’s “Am I the A**hole?” page, you gotta read the whole thing before you make a judgment call!

Take a look at this story and see what you think.

“My brother and his wife planned a winter wonderland wedding, everyone was supposed to be dressed in either silver, white or light blue to fit the theme.

All the outfits were supposed to be dramatic, even my brother’s wife said she didn’t mind if they didn’t even stand out, we were all supposed to look like rockstars there was even to be a prize for the best-dressed guest at the end, a fun game, I wanted to play along.

I saw a lot of his other friends were buying expensive gowns and they were looking gorgeous, I haven’t been working so much as of late so there was no way for me to keep up with it. I had dinner with them a few months before the wedding and my brother suggested that I wear my own wedding gown (white and silver) since I never ended up getting married, she agreed as well because other people were going to be in white anyway.

The wedding came and I wore my wedding gown, I got complimented on it all night (I pulled no focus from the bride, it was quite clearly their night) and I won the best-dressed award. The Wife was super nice the entire night but then I didn’t hear from my brother for about a week.

When I went over to find out what had happened, apparently his wife was extremely upset at me wearing the wedding gown and that I ruined her big day and the only person who should be in a wedding dress at a wedding is the bride.

I agree but I had former confirmation from both of them so I didn’t think it would be an issue. She called me a lot of names and my brother even said the way she’s been talking about me he’s starting to regret marrying her, he’s very protective of his siblings.

I can kind of see where she’s coming from and I feel like my dress has driven this wedge between them already, the guilt is basically eating me alive. She says I’m an AH and I should have known better despite her ‘obvious reluctant confirmation’ and my brother says I’m completely fine and did nothing wrong. I’m torn.

This person said that this woman is NTA and pointed out that it was the couple’s idea. 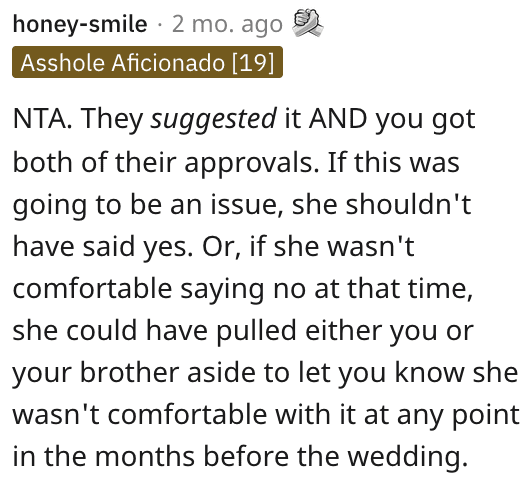 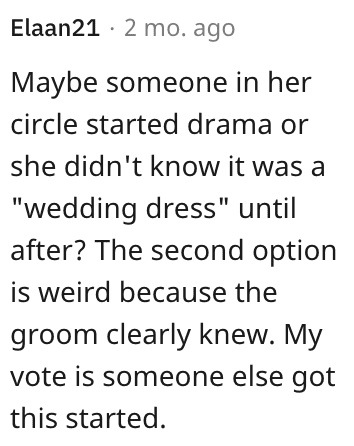 And this individual said this whole situation is just weird. 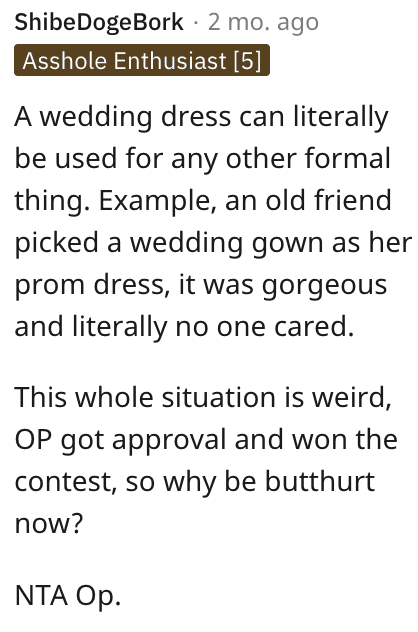