She Walked Out of the Airport When She Saw Her Mother-In-Law There. Did She Overreact?

Uh oh, it’s another story about in-laws that is decidedly NOT pleasant.

And, if you’ve been paying attention, you’ve probably realized that there are a whole lot of these kinds of stories on Reddit’s “Am I the A**hole?” page.

Read on to see what went down in this one…

“I F30 don’t have the best relationship with my husband’s mom. Since day one she tried to make remarks and compare me to her ??

She then tried to get on my good side and started overly praising everything I do and sometimes even copying me like that one time when she LITERALLY dyed her hair purple just like mine and when everyone pointed out how ridiculous she looked, she actually blamed me and accused me of trying to make a joke out of her.

So, Anyways! My husband and I took 2 weeks off work to go visit some places out of the country – tourism in other words. Thing is I was the one who saved up for and arranged for the trip (my husband was responsible for booking the tickets). My husband’s mom wanted to come along and threw temper tantrums when I said no.

She called, texted, sent people to talk to me into letting her come, even threatened to call the police and make some complaint up to get us to stay if she can’t come. My husband said we should just take her but I told him he was wrong to tell her about the trip in the first place. He gave me an ultimatum. said he wouldn’t go if she can’t come and I told him I’d gladly call his bluff which made him take his words back and say “FINE! I will tell her to stop it because we won’t take her”.

Things got quieter, suspiciously quieter. the day of the trip came and we got to the airport at 2pm. My husband was walking ahead of me and was looking left and right like he was looking for someone. I asked him but he didn’t respond. He lead me to the waiting area and first thing I saw was his mom standing there with her luggage.

I froze in my spot, I felt a cold wave washing over me and I was fuming inside. She and my husband were hugging that’s when I quietly turned around and started walking towards the exit. My husband followed me while shouting at me to stop. he tried to stop me but I told him off the harshest way possible.

He tried to say I was overreacting and that his mom was there “anyway” and I should let it go and not mess the trip up for us. I told him he and his mom could still go and that I was going home.

I went home and sobbed into my dog’s fur for several minutes. turned out he booked her a ticket without me knowing. an hour later he came home yelling and raging about how pathetic and spiteful I was to walk out and go home and ruin the trip last minute.

I told him he caused this to happen. he said that I was being so hard on his mom it’s ridiculous. I refused to fight any more but he kept on berating me then called my family to tell them that the trip was cancelled and that it was because of me. My family said that I shouldn’t have ruined it for myself and should’ve sucked it up and done my best to enjoy.

Did I really overreact?”

This person said she might want to consider getting a divorce. 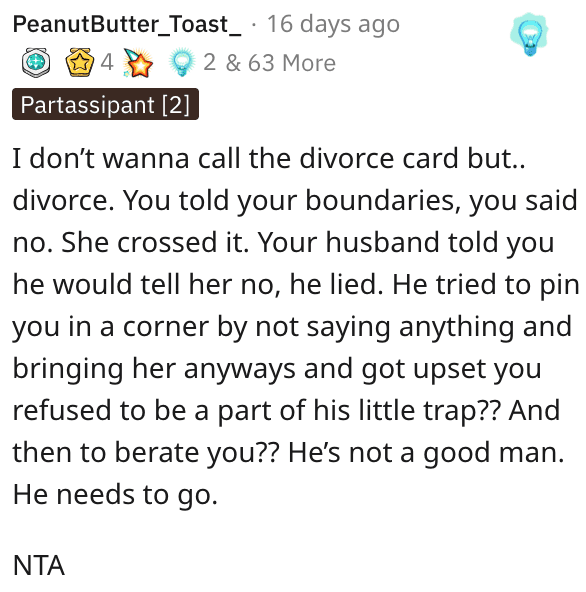 And this Redditor agreed and said it’s time for her to move on. 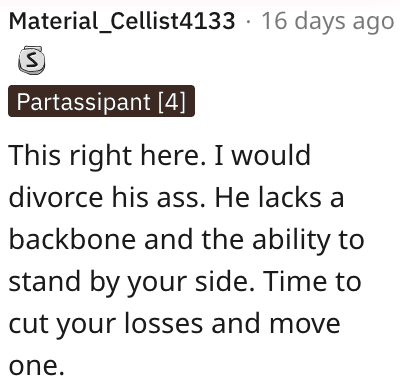 And another Reddit user had some thoughts about what happened… 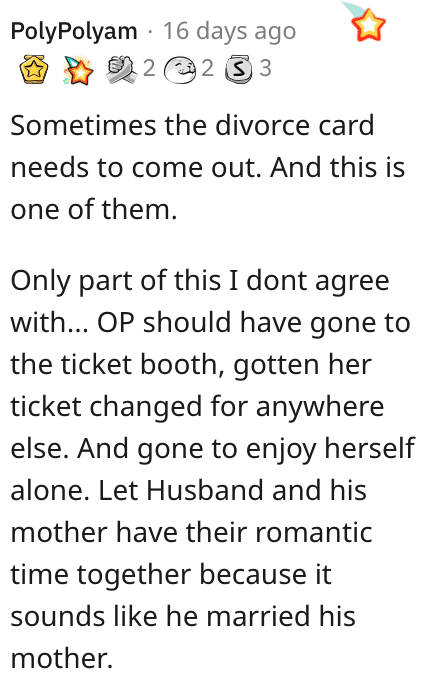