Have you ever had a friend who liked to trick you into always doing what they wanted to do in a sly way?

Yeah…it sucks and it gets old really fast.

But what if you’re married to someone like that?

Check out this story and see if you think this woman was an a**hole for how she reacted to her husband tricking her to go to a family BBQ.

It’s been absolutely crazy the past couple of years. My husband (m36) works an office job and because he’s a family-oriented type of guy, he always hangs put with his family. His family live on a ranch in the middle of literally nowhere. It’s a hassle to go there and due to my work nature, I don’t go to most of their functions, I do however make sure to attend the big ones.

Last week, his family wanted to host a BBQ party. He wanted me to go with him so badly since all his brothers were bringing their wifes and since they mocked him for coming alone in the past. I said sorry but I had a shift to cover. He begged, suggested I swap shifts with other nurses who are my friends and even called them all to beg them to cover for me. I grew irritated and told him to stop it. He sulked for a whole day then dropped it.

In the morning, and hours before my shift I discovered that my car’s tires were out of air. My husband offered to drive me to the hospital at 4pm and I agreed. I got ready and we got in the car but instead of taking me to the hospital, he drove me straight to his family’s ranch.

I was dumbfounded and angry after he said he tricked me into attending this BBQ and that I had to suck it up and set this shift out. I was so mad I didn’t know what to say.

We got to the ranch and I sat outside fuming. I waited and saw I still had time to make it to the hospital if I figured out a way to get there. I watched my husband go inside leaving his Keychain next to me (right where he was sitting) I took it and rushed to the back where all cars were parked, got into the car and drove off.

His dad saw me and told him. He started calling my phone relentlessly til I turned it off. I got to the hospital in time but didn’t dare turn my phone on til it was past 8 pm. I opened it and saw tons of angry messages from him berating me calling me horrible and a manipulator.

I got on the phone with him and he yelled about the awful stunt I pulled and bailing from the party and making him look bad in front of his family. He then calmed down and said that he now knows that work is more important to me and that he won’t ever trust me after I basically stole his car and ran with it.

We’ve been on terrible terms since then. His family are also mad but I haven’t spoken to them about it yet nor calcified anything.

AITA for what I did? I was desperate and worried that messing my shift might cost me my job.”

One reader said she’s NTA and they hinted that her husband messed up her tires on purpose. 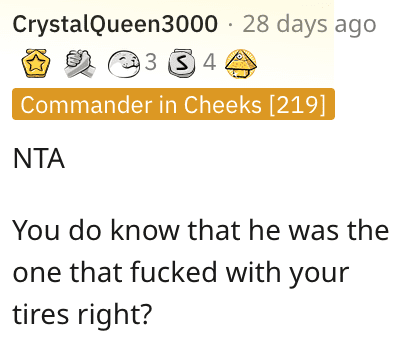 And this individual agreed and said this woman is NTA. 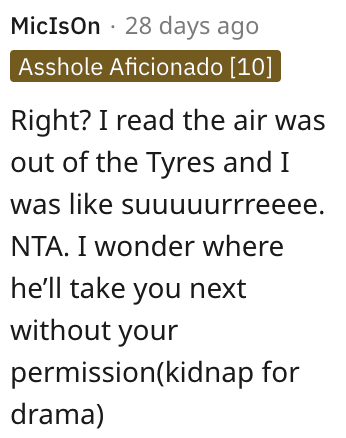 And another Reddit user said that this story actually goes a lot deeper than going to a family BBQ.