My philosophy in life is that if your significant other picks a movie and you’re not into it, you grin and bear it…and you lie and say you loved it.

But that is not what happened here, my friends…

Check out this story and see if you think this woman acted like an a**hole.

“My boyfriend (Wyatt) and I always watch movies together every time we have off days that end up on the same day. Especially since the pandemic.

And we go back and forth on who picks the movie. But I’ve noticed he’s usually talking through my movie choices. Either pointing out ‘plot holes’ or just talking down about the movie in one way or another.

I never act this way when it’s his turn to pick the movie. Even if I don’t care for it. Like the last movie he chose, The Fountain. I was so confused until half way through and then bored the rest of the film. But I didn’t talk during the movie or constantly dump on it either.

And even at the end when he asked what I thought I said it was alright, even though I thought the movie wasn’t good. It tried to do a bunch of different things all at once and ended up doing nothing. But he seemed really fond of it so I didn’t want to hurt his feelings.

But he doesn’t seem to have that mindset when it comes to him watching my picks. I’ve told him to shush and to just watch the movies but he just sighs loudly and says they’re boring. If I tell him to stop he gets all huffy and goes totally silent and usually takes his phone out to play a game or scroll the internet, totally ignoring me and the movie. It really hurts my feelings.

And yesterday was my turn to choose again, and I picked a good movie that really hit me hard as a kid (I bawled when I first watched it and still tear up to this day). And I told him this movie was special to me but he barely got 10 minutes into it before he started up saying it was boring and childish. It is a kids movie but that doesn’t make it boring.

I was getting upset and before the big part of the movie even got close I just couldn’t take it anymore. I felt like him acting this way during a super important part would ruin the movie for me, maybe forever, so I just got up and turned it off.

He asked what I was doing and I told him I didn’t want to have the movie ruined for me so it was better if I just turn it off. He said I was being a baby and to turn it back on. I refused and just told him to pick something to watch instead, then I sat on the couch. He got mad and said if I was gonna be dramatic like this then he didn’t want to watch anything with me and got up and went to his room and slammed the door.

This happened the other day and he’s been giving me the cold should and when I asked why he said he wants an apology for making him feel like dirt. Should I apologize? Did I really make a huge deal out of just a movie?

This person said she’s NTA and that her BF is the one who owes her an apology. 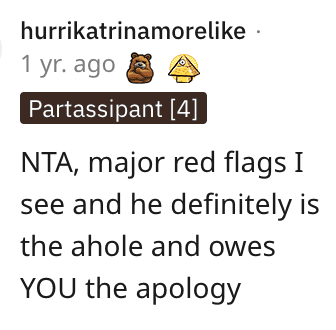 Another reader said that this guy was being a real hypocrite in this situation.

And this individual said she’s NTA and maybe they need to find something to do together that doesn’t make one of them miserable.

Read Also:   Investing in Risky Bets Like Bitcoin, and 5 Other Questionable Money Moves That Millennials Make