She Told Her Fiancee She Was Going to Lock Herself in Her Room for the Rest of Their Vacation. Was She a Jerk?

This REALLY does not sound like a very fun vacation.

But that’s just my opinion…

So what I need you to do now is to read this whole story from a woman who wants to know if she was an a**hole for how she acted on her trip.

“My fiance and I were invited to go along on a trip to California for a week.

I do not have my children with me due to them being with their father and having wrestling tournaments that they cannot miss (already spent hundreds on nonrefundable tickets for them to participate).

We drove here with his family, so I was already quite exhausted when getting to the resort after having listened to an 8 month old scream practically the entire ride (23 hours but they INSISTED we go with them for the drive to swap off driving and site see). We were crammed in this vehicle like sardines because on the floor was their family dogs (a 75lb bull mastiff and her two puppies). So yes, dog s**t was also present. They were quick to clean up but still. The car was putrid.

When we get to the resort I quickly noticed how that I was seen as a built in babysitter for my fiance’s sisters 8 month old daughter. Everytime my FSIL and her husband wanted to take a shower, swim, eat, or even if they just didnt feel like holding her, this child was thrown in to my lap basically. Every single time.

There are 5 other adults here but they claimed that this child only wanted me. I cant exactly argue it because at this point I had held the baby so much that she did put her arms out for me quite often, even in passing in the hallway. But it hit a point where I was getting p**sed. I was in the pool yesterday and my FSIL gets in and within 5 minutes passes the baby off to me.

My fiance comes in here a bit ago and tells me we are all going out to eat and I told him I didnt feel like going and becoming a highchair to the baby while her parents ate.

As it is, I’ve already held this child more than enough and had several drinks spilled on me because of her octopus arms. He said I cant just sit up here to avoid holding the baby and that I am wasting the trip all because I wont say no. Half the time they dont ask though.

The baby is practically tossed at me. AITA?”

Check out what folks on Reddit had to say about this.

This person made it pretty clear how they feel about this whole thing. 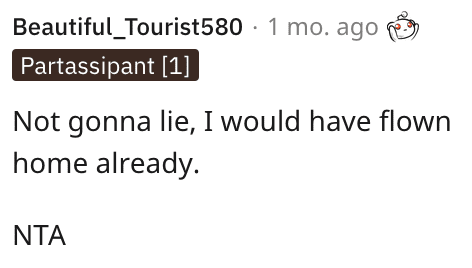 And another reader agreed and said this woman is in a no-win situation. 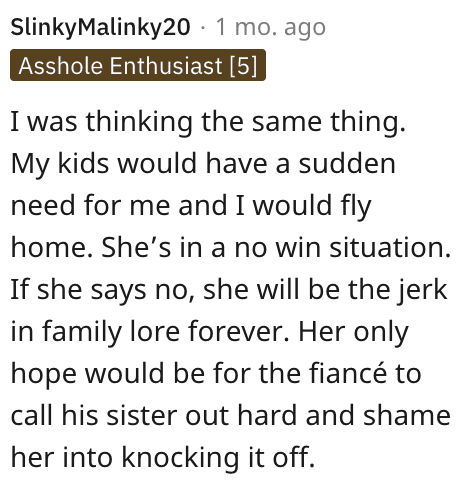 But this individual had a different take and said that she still hasn’t even said no once so she might want to try a different approach to fix this situation. 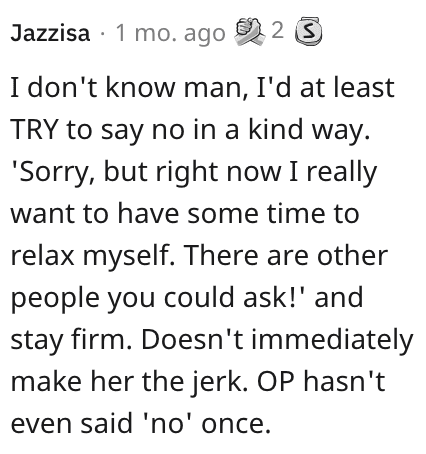