She Told Her Ex His Lack of Money Isn’t Her Problem. Was She a Jerk?

Either way, being broke sucks…but is this woman responsible for her ex who is seriously lacking in the funds department?

Read on to see what happened…

We got divorced 5 years ago and I have primary custody while he sees her two weekends a month. Last year, he got married to Amanda who has sole custody of her kids (10&8F) from a previous marriage. Amanda is a SAHM (not for any health reasons or so on, she just doesn’t want to work) while John works at a 9 to 5. He makes good money to support them, but not enough to live in luxury.

I have a much higher-paying job. Since it’s just me and Sadie, I make sure she has the best possible life. She goes to a private school, set her up a college fund, and she has much better things than most kids (phone, clothes, etc). I still managed to raise her to be humble and not take things for granted, and she’s one of the hardest working people I know, always making sure to get good grades and keep her room tidy.

Well, the last few times she came back after a weekend at John’s, I noticed that the clothes she was bringing back in her duffel are a) not her size and b) much cheaper and poorer quality than what I usually buy for her.

I asked her why that is and she told me that while she’s at her dad’s, Amanda takes away her nice clothes and gives them to her kids while Sadie gets the clothes they buy from Target. I asked her if she wanted them back but she said she didn’t mind sharing since all her favourite clothes were kept here.

The problem came when I went to pick her up last weekend.I had a business meeting and couldn’t drive her over, so Amanda offered to just pick Sadie up from school, which hadn’t happened before. When I got there on Sunday, John and Amanda asked me to sit down with them and when Sadie came to hug me, Amanda sent her to her room quite harshly saying her punishment wasn’t over yet. I was confused because Sadie very rarely misbehaves.

They sat me down in the kitchen and said that it was unfair for Sadie to be going to a private school while her kids go to a public one, so they’d decided that Sadie would be pulled out of private school and put in the same school as the girls. They also said I should keep up Sadie’s punishment because when they told her she blew up at them, told them it wasn’t fair, and yelled that Amanda and her kids weren’t even her real family, that all they did was steal.

I told them in no uncertain terms to f**k off. I would not be pulling my child out of a school she likes, away from her friends, because they can’t afford it. I told them they could easily make as much money as me if Amanda started working in her field because she has the qualifications and the job market is very good. I told them their money problems are not my issue, and if Sadie’s items get stolen again or they try to pull her out of school, I’ll be taking this to court.

They’ve been blowing up my phone ever since, calling me a selfish AH, and after telling the story to a friend, he told me I was rubbing my success in their face, but I still don’t feel like I did anything wrong.

This reader said she’s NTA and that the kid’s school needs to know about what’s going on here. 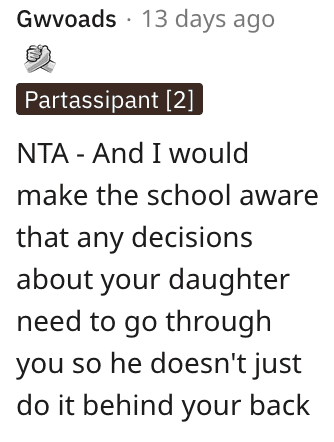 And another Reddit user said she needs to get the courts involved.

Another individual said she’s NTA and also suggested that she get a lawyer.