She Told Her Boyfriend He Ruined Their Date. Was She a Jerk?

It’s ruined and it’s your fault!

No one like to hear that…but we’ve all heard it before at some point.

Check out this story from Reddit’s “Am I the A**hole?” page and see if you think this woman was wrong in this situation.

“I (F21) and my boyfriend (M23) of five years went to my favorite restaurant a few weeks ago.

The meal was great and we both really enjoyed ourselves. It was perfect, a completely perfect dinner. I paid the $60 check and we went out to the parking lot to the car. I live in a huge college town along with that Saturday night being a senior ball so the town was busy.

We get back to the car and the cars surrounding it was parked exactly the same as they were when we went in. There were cars to each side of his car along with a truck parallel parked behind him at least two car lengths away. In front of him was the wall of the restaurant and behind him was the roadway in the parking lot then the parallel parked truck at a distance to clarify.

He also added he doesn’t want others to see me spotting him like he can’t handle his vehicle. I say okay, I’ll go into the restaurant and find the owner of one of the car and ask if there was any way they would move so he could get out, didn’t want to but it was the only choice.

He says no and kinda flips his s**t (throwing his hat and sunglasses into the dash in frustration and also flooring it as if he’s going to hit the building then slamming on the break before he does so.) He calls his parents screaming about not being able to get out of the spot and even locked my door when I tried to get out of the vehicle to go get someone else to help/spot him.

The screaming and me begging him to just let me spot him continues for 20 minutes and he makes a few jabs that I don’t have a license so I wouldn’t understand how he feels. At that point I was really upset and in tears. I had just taken him out to dinner and spent a pretty good amount of money for him to show his a**? Finally he lets me out of the car to spot him and within 2 minutes we are out of the spot.

Later that night I told him that he ruined the night and the dinner I paid for for absolutely no reason. I also added that he always has to find away to destroy any date or thing in general I want to do just because it’s not something he picks. He said that what happened was my fault because I should’ve have not spoken to him because it made him more frustrated when he was trying to find a “solution to the problem.”

This person said this woman is NTA but her boyfriend sure sounds like one. 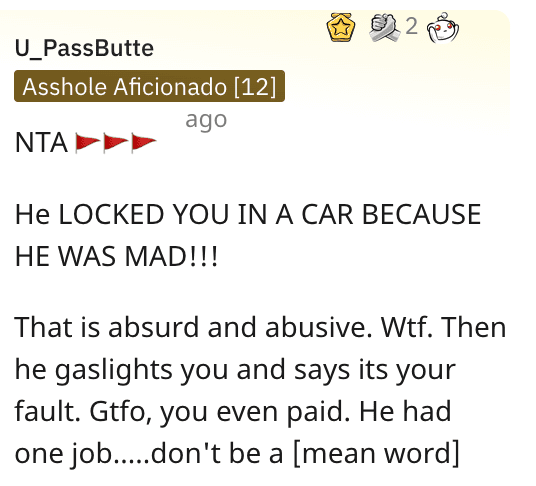 And another reader said that she needs to dump this fella because he sounds like a gaslighter. 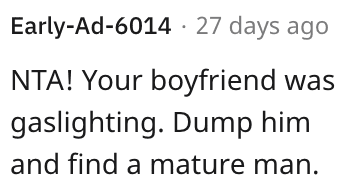 And one individual said she deserves someone better and should learn some lessons about what she DOESN’T want from this guy. 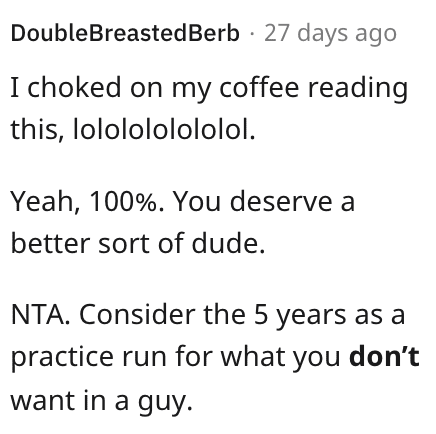