She Sold Her Ex-Fiancée’s Family Heirloom After He Cancelled Their Wedding. Is She Wrong?

Things get testy and contentious when it comes to family heirlooms…and that’s when it’s actually between people in the same family.

But what happens when you sell an heirloom from ANOTHER person’s family?

That’s the dilemma at the heart of this story from Reddit’s “Am I the A**hole?” page.

Read on to see how it all went down.

But last week a mutual friend caught him cheating on his ex ‘Kim’ so I called it off. Because it’s so close to our wedding date, I had already booked everything like the venue, catering and everything else. I barely managed to get any money back as it’s mostly non-refundable so in total I’ve lost $20,000.

Last year I took out a loan to cover the costs of the wedding, the longer I take to repay it the more interest it gets. When we first got engaged, Mason agreed to sharing our finances together, meaning had we got married I would’ve been able to pay it off. This was supposed to be in our prenup but because we didn’t get married, it meant he no longer had to share finances.

I asked him if he was still willing to help and told him that I will go into debt if he doesn’t as I can’t repay it alone. He told me ”It isn’t my problem you took out a loan you can’t pay back” and stopped responding after that.

When we got engaged, Mason proposed to me with a family heirloom ring belonging to his great grandmother that was worth $25,000. When we canceled the wedding, he told me he wanted the ring back but we never got around to arranging a time he could pick it up.

Because I don’t want to go into debt, I told him that if he didn’t agree to help pay it off (I wanted a lawyer involved) that I would sell the ring. He didn’t reply and ignored the messages however after talking to a mutual friend (Jake) I found out he had actually read the messages and told everyone he didn’t care because I ”wouldn’t do it”. I asked Jake to tell Mason that if I don’t get a message from him in the next 24 hours that I would sell the ring.

Jake told me he again said he didn’t care and didn’t think I would do it. So the next day I sold the ring to an online website and messaged Mason to tell him it had been done and told him he shouldn’t have underestimated me.

He started cussing me out, saying I didn’t scare him and that he would be around for the ring later. True to his word, he came to my house demanding the ring and I told him I sold it already and showed him the proof.

He blew up at me, saying I was a petty b**ch and that I shouldn’t have sold it because it wasn’t just a ring, it was an heirloom that meant a lot to his family. A lot of my family members think I overreacted and shouldn’t have gone to extreme measures as it will be hard for him to get the ring back, if he even can at all.

Let’s see how Reddit users reacted to this story.

One individual said she’s NTA and they brought a little history to the table. 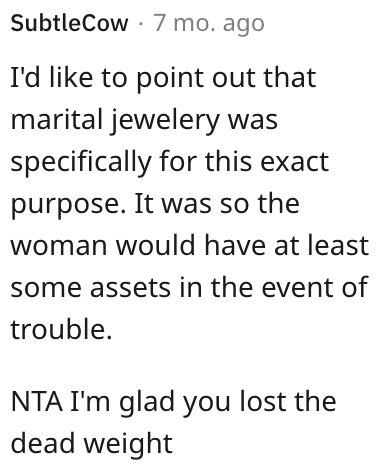 And this Reddit user agreed and said the hypocrisy is pretty astounding. 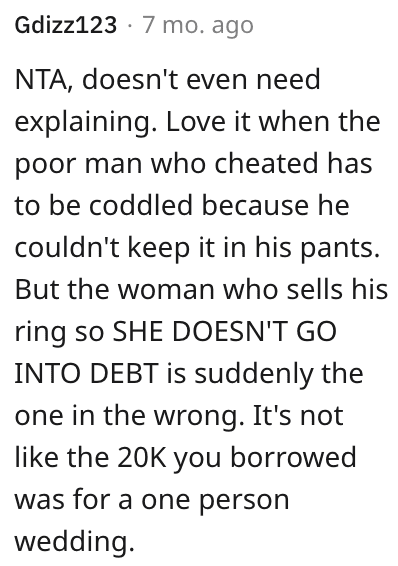 Another reader said that he screwed up and she did nothing wrong. 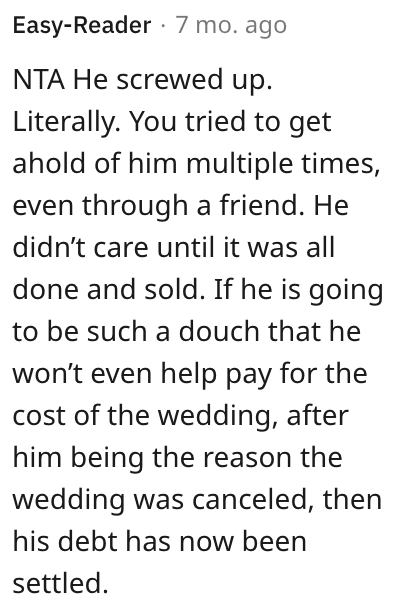 Read Also:   Why Are Cowards Are Called “Chickens”?