She Served Mac and Cheese to Her Husband’s Family. Was She Wrong?

What’s wrong with macaroni and cheese?

Absolutely nothing! In my humble opinion…

Let’s see what went down and if she was out of line.

“My husband (Asian) and I (American) welcomed our first born 4 weeks ago. The baby is healthy (Thank God) but I’m exhausted, haven’t fixed my hair, barely able to shower and can not sleep.

My husband’s family had been pressuring us to visit to meet the baby. I tried to hold them off as much as I could but yesterday, I was surprised to find them standing on the porch. turns out hubby invited them for dinner. I was embarrassed and felt like I wasn’t ready for visitors (judgemental ones at that 😉) cause the house was a M.E.S.S y’all.

Anyways, my husband sat with them while I fed my son then later I asked my husband if we should order take out for dinner. He said “NO” because his parents would find this rude and unwelcoming. He suggested that I go inside the kitchen and prepare something, anything long as it’s “homemade”. I said fine then went and made some Mac N cheese. The reason I prepared this meal is because of how easy it is.

Once I served the family, My husband’s mom looked at me and was appalled. I noticed something was wrong. She asked if I really found it “appropriate” to serve her and the family Mac N cheese. I asked why not and she went on a rant about how disrespectful this was and that I clearly have no experience in what is right and wrong when it comes to hosting.

I said excuse me? Who said I signed up to host an expected visit from them and she took it as in I didn’t want them there. her husband said they were just there to finally see the baby that I kept them from seeing for an entire month. that’s a whole month of his life they “missed” out on. We had an argument and they decided to go home.

My husband said that deciding to serve his family Mac N cheese was more offensive then serving them nothing at all. I told him I was too exhausted to cook their “traditional feasts” that I was forced to learn from his mom. He took offense and said that I was being mean and disrespectful towards not only his family but his culture. I went inside the bedroom to stay with my son.

My husband stayed on the phone with his family for an hour then kept giving me the cold shoulder and refused to eat what I cook in support of his family.

I understand how some guests might find it offensive especially his family. but I was just trying to make a quick homemade meal like my husband wanted. What’s wrong with Mac N cheese?”

Now check out what Reddit users had to say about this.

One reader said this isn’t about a clash of cultures, these people are just a**holes. 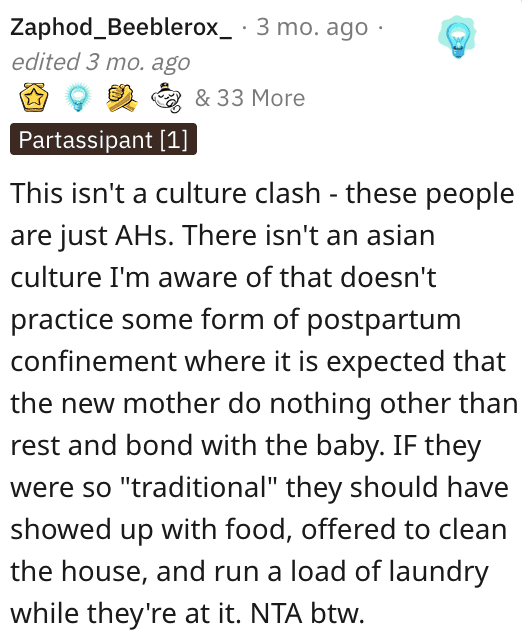 And this individual said this woman is NTA and had some feelings about what they think should have happened here. 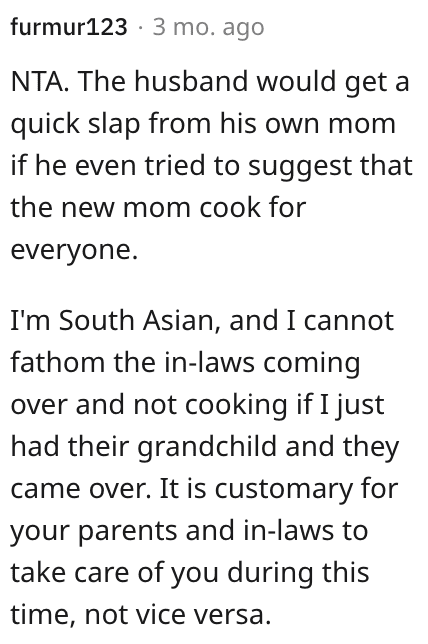 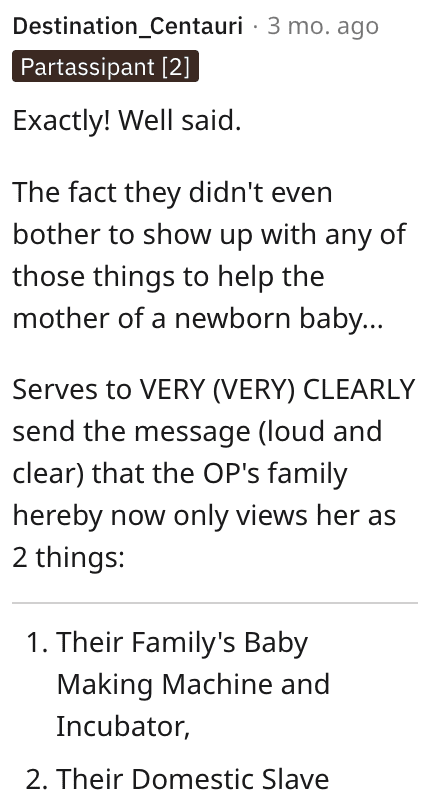