She Screamed at Her Sister During Her Engagement Party. Was She Wrong?

Please don’t steal it from me!

But please DO check out this story from Reddit’s “Am I the A**hole?” page and let us know what you think.

“I (28f) am getting married in six months to my fiancé (30m). The wedding will be really small (only close family and friends) and we’ve had a quick engagement just because we’ve been together for so long (8 years).

Now, I have an identical twin sister M. Despite us being twins, M and I have never been close due to M’s (seemingly) pathological need to be better than me at everything. Ever since we were little she has had to be the ‘better’ twin at everything. If I wanted to do a sport she had to do the sport too. If I showed an interest in a hobby, she had to excel at that hobby. Our parents always made a point of letting us find our own personalities outside of being twins so M’s behaviour made it hard growing up.

It got worse in high school when I started to date. Any boy I showed an interest in, she had to get there first. It didn’t matter if she liked him or not. It only stopped when I moved away for university (I got into my first choice. M applied but didn’t get the grades). I moved away, found my own personality and met my now fiancé. I’ve hardly seen M over the past few years except for Christmases and our birthday.

It all came to a head at my engagement party last month. I invited my family and, unknown to me, my mother had told M what kind of outfit I was wearing. She came in a dress almost exactly like mine but more glamorous. Her hair and makeup had been professionally done and she did look incredible. I tried to ignore it as it was a celebration for me and my fiancé. The night went well until M decided to make a speech.

The whole speech was about us being twins, doing everything together and how much I’d always tried to be just like M. She joked about boys I’d dated, made a dig at not being a bridesmaid because “OP is probably worried I’d steal her thunder” and rounded it off by saying “If you get tired of her, you know where I am” to my fiancé.

I saw red, grabbed her by the arm and dragged her into the hallway. Now I’ll admit, I swore a lot while screaming at her and had no idea everyone at the party could hear. I ripped into M and called her a “psychotic jealous c**t” wouldn’t stand the idea of her sister being happy.

I also yelled about how if she hadn’t spent our entire lives pretending to be me, she wouldn’t be single, unemployed and still living at home. I rounded it off by telling her to f*ck off and not bother coming to my wedding as I didn’t want a “pathetic waste of DNA” there. Harsh words but I was really mad.

Since then several family members (including my mother) have called me an AH for embarrassing M at a family party and for bringing up “sensitive” subjects such as her unemployment. I’m refusing to back down on her not being there despite nearly my entire family telling me to “get over myself”

This reader said she’s NTA and that her sister made a move on her man. Come on! 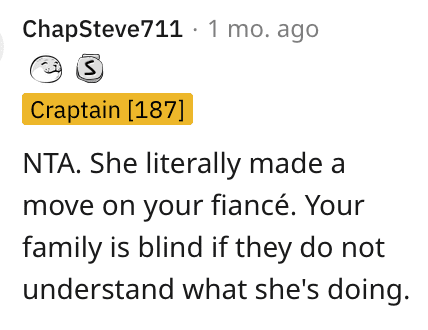 Another Reddit user said she needs to give her family an ultimatum. 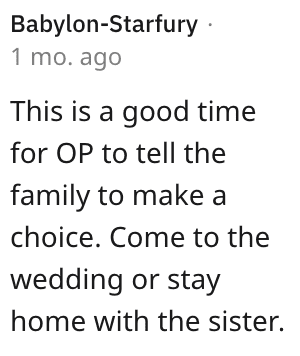 And this individual said she’s NTA and that if her family isn’t with her on this they don’t need to come to her wedding. 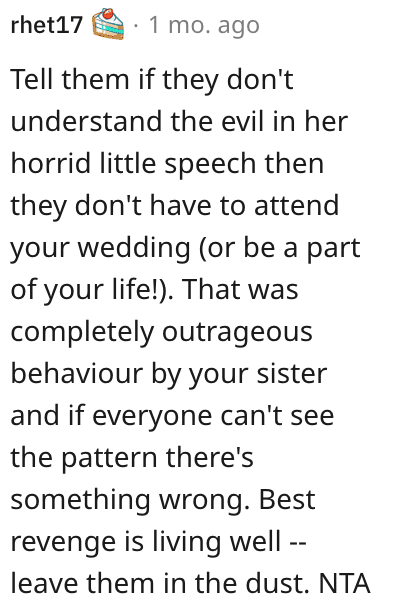