She Ruined a Co-Worker’s Wedding and Got Him Arrested. Is She a Jerk?

Well, that’s a crazy headline if I’ve ever seen one!

But sometimes things really go off the rails on Reddit’s “Am I the A**hole?” page!

Let’s see what happened in this one…

“The title sounds bad, but hear me out.

I (38f) had 2 work colleagues, Mary and Adam (both in their late 20s-early 30s). Mary started in the company first and then she got Adam to join, they worked in different departments and Mary was in mine. Later, Mary left the company to pursue another carrier. When they started at the company, they were already married for a few years.

Now Mary is the kindest and loveliest person I’ve ever met. She was always polite, helpful and would cheer anyone up. We missed her dearly. So it came to a shock when we found out she is divorcing Adam because he has cheated on her. I have called her to express how sorry I am that this has happened to her and we were talking almost daily ever since.

I was impressed how well Mary holds herself in such situation, she wouldn’t bad mouth Adam and the only thing she mentioned was how her wedding dress and a few family heirlooms went missing when she was moving her stuff from their apartment. She thought they might be misplaced in a different box and will turn up eventually.

A few years passed, I now work in the same department as Adam. He is a good work colleague but can be dismissive and ignorant sometimes. Adam invited me to his wedding with the lady, “Chelsea” he cheated on Mary with. As the entire department was invited, I said yes, making sure Mary is OK with this. I’ve also told her where the wedding will be. (It’s not too far from where she lives and we could go for some drinks after if she wanted to)

On the day of Adams wedding, I have noticed that Chelsea is wearing a similar dress that Mary worn in the photos of hers and Adams wedding years ago. So without thinking I have snapped a picture and send it to Mary with the caption saying: “doesn’t this dress looks familiar?”. Mary saw the message but she didn’t respond and about an hour later the police shown up at the venue.

I need to add the police in our country is ruthless and any theft is considered a criminal matter for the police to deal with. Police has asked Chelsea to take the dress and all the jewellery off, Chelsea refused and started arguing with them, and then Adam joined in. As they were rude to the police, they were taken to the police station. Everyone at the wedding had to leave. I have tried to call Mary but she wouldn’t pick up the phone.

As we found out later Chelsea was wearing Mary’s wedding dress and her heirlooms, Mary spotted them on her in the picture I sent to her and called the police. Apparently, she has previously asked Adam if he had them, and he declined, saying he never saw them. So after she saw the picture she knew he was lying and stole them. Chelsea had to leave the wedding dress and jewelry at the police station and go home wearing her underwear and Adams jacket after they were bailed out.

Yesterday Adam returned to the office and went completely mental at me, blaming me for sending a picture to Mary and ruining his wedding, he would also call me an a**hole for what I did.”

This person said she’s NTA but this Adam character sure is. 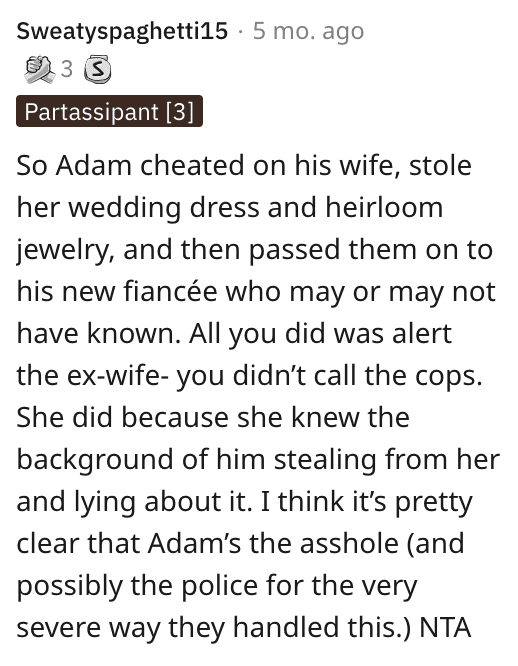 And another Reddit user said that the company should be pretty concerned about this guy.

This individual said she needs to report this to HR and that Adam is definitely an a**hole. 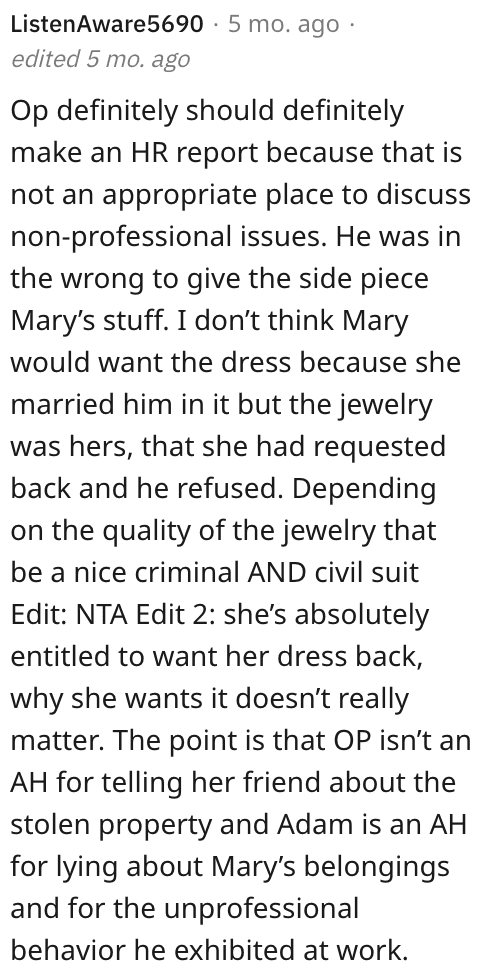