She Returned a Gift for Her Husband After He Accused Her of Stealing. Was She Wrong?

But you get a mixed bag of tales on Reddit’s “Am I the A**hole?” page and this one is a doozy!

Take a look and we hope to hear from you in the comments.

“My [29] husband [36] is the breadwinner of the family. I stay home with the kids who are preschool age.

He pays for the mortgage, bills, household needs, food, kids needs…..etc he has set a monthly budget for each category and handles getting everything done. Recently, he has become overwhelmed and told me to handle grocery shopping but before he let me, he asked me to write a list of all the stuff we need so he could calculate the total and also so he’d have an idea how much I’ll be spending when I take his credit card.

I didn’t have an issue with that because this way we’d watch our spending habits. however, he said I’m never allowed to get something that isn’t on the list unless I’m paying for it some other way.

On friday I was doing some grocery shopping as usual and saw that the store had some nice shoes on sale. the price was insanly low for this brand and so I decided to grab a pair for my husband thinking he’d be happy with them since he needed new sneakers anyway.

I bought them and when I showed them to him he flipped out on me saying I made a huge mistake by buying something that was not on the list. I agreed with him but I thought that since the shoes were for him then it’d be different, he said I screwed up and shouldn’t have bought those sneakers without even telling him. but in my defense I said that the price was low so it’s not like I spent $100 on shoes, and also I saw this as a great deal and wanted him to have those nice sneakers.

He plainly said that what I did is considered “stealing” since he never consented to have those sneakers purchased and said that I’m being irresponsible with money that is why I no longer have an income and my spending habits need a “grib”. I felt hurt by what he said. We argued about it for hours and he avoided speaking to me the rest of the day.

The next day I went and returned the sneakers and took the money back. He got home in the evening and lost it when he found out I returned them. He said he couldn’t believe how petty and childish I was to do actually do this. I explained I was just correcting my “mistake”. he tried to contact the store and was told the sneakers were already sold.

He threw a fit then went out with his friends and came home late at night still not talking to me.

Did I mess up? maybe I shouldn’t have purchased them knowing they weren’t on the list but I just wanted him to have those sneakers and thought I was doing a nice gesture.”

One reader said this woman is NTA and she needs to get out of this situation. 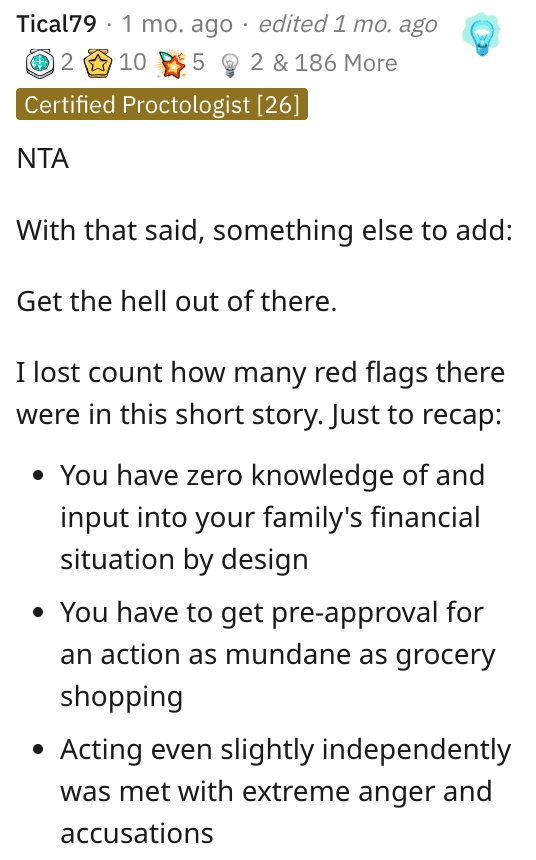 And this individual agreed and said this man is very controlling. 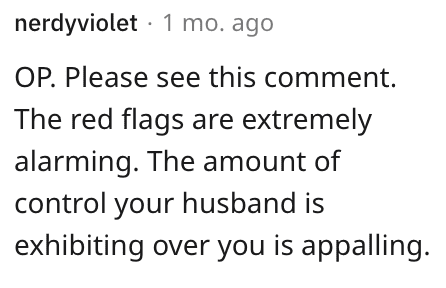 Another Reddit user said her husband is a**sing her financially.