She Refuses to Answer to a Nickname She Doesn’t Like. Is She Wrong?

Having a nickname you don’t like is really a drag.

So what’s the best thing you can do about it?

Ignore people when they use it to refer to you!

Check out this story and see what you think.

“I (28F) was named after a really obscure character from Greek Mythology. My preferred nickname is taken from the end of my name. I always introduce myself with “I’m (my name) but you can call me (nickname).”

None of my coworkers in the small business we work for have ever had a problem with this before, until Megan(25F), the niece of Jeff(50sM) one of the two owners, was hired. Jeff and Dave(50sM) co-own the business but Dave does the actual day to day running of the business.

I introduced myself and my nickname as usual but she immediately said that “Bessie” (not the actual name) would be a better nickname because it comes from the beginning of my name and that she liked it better. I told her I really didn’t like that nickname and wouldn’t answer to it and asked her to please not call me Bessie but she insisted that it was so much prettier and that I just needed to get used to it.

For the next two months she tried to call me Bessie but I completely ignored her whenever she addressed me that way, even when I knew she really needed help with something. She would call my desk phone and say “hey Bessie” I would reply “you have the wrong number there’s no Bessie here” and hang up.

She then tried to get some of the employees outside the office to start calling me Bessie, but I quickly shut that down. I usually finish my work early and help them with a lot of tedious little things that aren’t part of my job description and threaten to stop helping them unless they used my preferred nickname.

Friday she decided she was going to get me to respond to Bessie no matter what. We have an open office design but are at opposite ends. She started calling out Bessie in a singsong voice over and over again to try and annoy me enough to respond. Other coworkers got annoyed, most telling her to stop and one Lisa(43F) telling me to just let her call me Bessie already.

I refused and she kept calling out Bessie louder and louder, until Dave barged in. He’d been on a conference call with an important client and could hear her yelling from his office down the hall. He told her to be quiet and that if she called me Bessie one more time, he’d write her up and dock her pay.

Later, Megan cornered me in the break room, called me an AH for getting her in trouble and called me Bessie again for good measure just as Dave was walking in to heat up his lunch. He gave her a stern look and said “I warned you.”

Then he walked to HR to have her written up. Lisa is saying I’m the AH for never helping Megan and that, if I had been nicer or hadn’t fought her so hard on the nickname, she probably would have given up on it a while ago but because I made such a big deal out of it, it became a challenge.

One reader said this woman is NTA at all.

And this Redditor argued that Dave is the hero of the story and this Megan character needs to be put in her place. 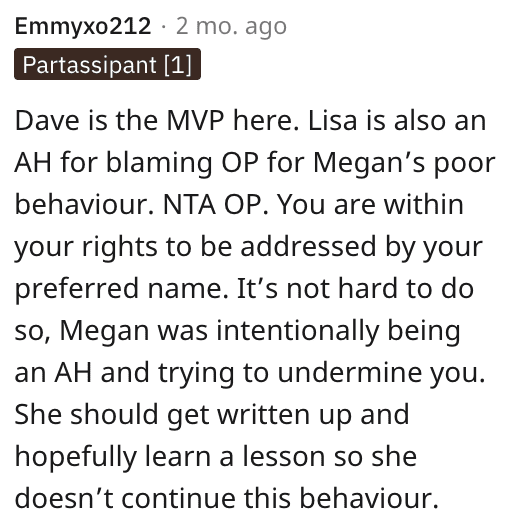 This individual agreed that this woman is NTA and that Dave put the bully in her place. 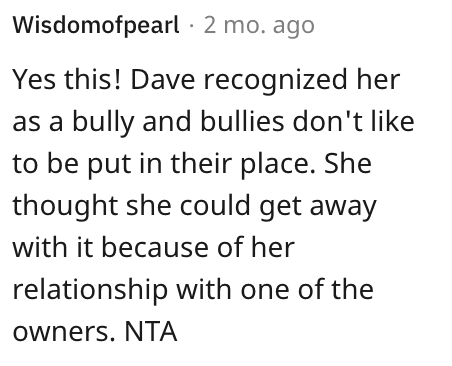 14 People Recall Memories From Childhood That Are Darn Near Universal